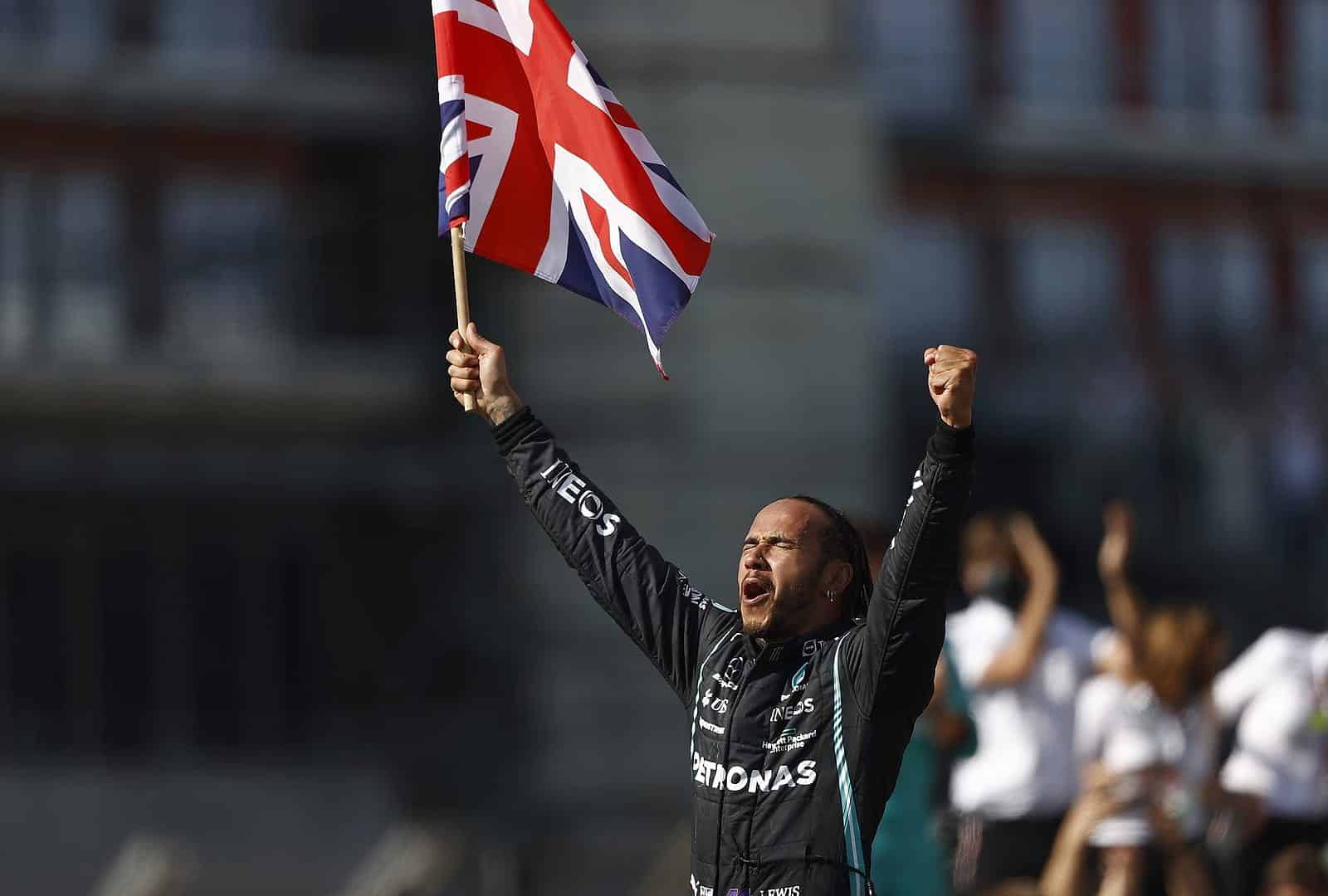 Lewis Hamilton made the most of his trip to his home track for the British Grand Prix.  After earning pole for the qualifying sprint race and losing the pole for the GP to Max Verstappen, Hamilton put together a classic performance in charging to victory Sunday (July 18).

But his win at the British GP did not come without controversy.  Verstappen and Hamilton collided on the first lap, sending Verstappen into the barriers while allowing Hamilton to continue.  The ensuing red flag gave both team principals time to offer their feelings and push their agendas.

One controversial moment at Silverstone ?

While Hamilton faced a 10-second penalty, Verstappen found himself in the hospital to get a full medical clearance, giving the season’s rivalry a new intensity.

Though Verstappen and Hamilton led the headlines, Charles Leclerc is the forgotten understudy in this play.  After the contact between the championship leaders, Leclerc scooted ahead and into the lead – which he held until the final two laps.

At that point, Hamilton pushed past Leclerc, showing both the speed of the Mercedes and the racecraft of the long-time veteran to steal the win.  Leclerc gave Ferrari a notable podium finish for the season with Valtteri Bottas being the affable teammate to Hamilton and taking third.

Lando Norris looked like he might be in place to secure a podium but fell prey to Mercedes speed and took fourth at his home GP.  Daniel Ricciardo finished fifth, giving McLaren a solid day of top-five performances.

Carlos Sainz secured a solid sixth-place finish with Fernando Alonso taking seventh.  Lance Stroll earned eighth after what looked like it might be a lost weekend for the Aston Martin driver.  Esteban Ocon crossed the line in ninth, giving Alpine two points performances on the day.  Perhaps the surprise of the finishing order came with Yuki Tsunoda again earning points for Alpha Tauri, snagging 10th after lagging in the back for much of the race.

– The race before the race came off well.  The introduction of the sprint race as a method of qualifying came as a bit of a novelty and faced its share of criticism.  Some thought it would be tame and boring while some saw it as an opportunity.  It turned out to be rather entertaining.

The sport is trying to spice up its qualifying process and the introduction of a race to set the lineup was a new idea that looks like it might provide extra drama for future race weekends.  There are two more sprint race qualifying sessions left on the calendar and the question now becomes whether they will live up to the results of the first.

– Helmut Marko, the Red Bull founder, may be babbling about how the sport should look further into the Verstappen–Hamilton clash, suspending Hamilton, but that is mere posturing.  Marko and company have not had one of their drivers in position to win the title in a number of years.

– Sometimes, it is easy to forget the dangers involved in racing as each series has invested so much in ensuring the safety of drivers.  Max Verstappen’s collision with the wall registered 51 G-Forces, a remarkable impact and a reason that Verstappen made a trip to the hospital to be checked out – and cleared.

Hence, it is time once again to appreciate the safety measures in F1 and celebrate Verstappen being OK.  The introduction of the Halo device was the latest in a long line of measures meant to ensure drivers walk away but wrecks always provide new consternation.

Seeing Verstappen get out of his wrecked car and shake this one off is no small feat. Kudos to F1 for that.

– Sergio Perez started from the pits after spinning out during the sprint race and his car required some attention.  In driving what is, arguably, the fastest car on the grid, Perez did nothing to impress anyone in what should have been a spirited drive forward.

Instead, Perez languished in the upper half of the teens, at one point hitting 10th but after pit stops failing to make his way beyond that.  Red Bull bringing Perez in with three laps to go became a peculiar decision with Perez holding 10th. It was a decision made to stop Hamilton from gaining an extra point for fastest lap yet cost the team a point in the constructor’s title.

Perez bounced from Aston Martin (Racing Force) to the premier team in the sport and is showing confusing results.  Some races, he is a solid stablemate to Verstappen and other days, he is just as troubled as any other driver who has sat in the second seat, from Ricciardo to Alex Albon to Pierre Gasly.

– The big question of the race came with contact between Verstappen and Hamilton on the first lap.  The two collided with Verstappen spinning off into the barriers in what looked like a racing incident.  But the stewards have been keen to ignore the concept of incidental contact the past few races.

If anything, the sport seems to be regulated with a heavy hand when these issues come up.  What looked like a racing incident earned Hamilton a 10-second penalty, one that looked like it would end the hope of any stellar result.

The recent trend might discourage drivers from making bold moves and that would be a big loss for the sport.  If anything, encouraging more drivers to try and overtake is exactly what the sport needs rather than pushing them to fall in line and settle for position.

The adjudication of the sport has been pretty solid over the past few years but the recent direction appears to be questionable.  If the sport does anything during the upcoming summer break, examining how the stewards rule is a vital component.

– Charles Leclerc last won at the Italian Grand Prix in September of 2019.  The 2020 season saw Leclerc manage just two podiums on his way to an eighth-place finish in the standings.  To say last year was a frustrating performance would be to underscore the challenge of driving for a team that appeared to be in disarray from top to bottom.

The 2021 season has provided only a touch of comfort for Leclerc, a bit of a rebound but still not a challenger at the front of the grid.  And the one stellar moment, with Leclerc claiming pole for the historic Monaco GP, fell by the wayside when Leclerc failed to start the race, throwing away what should have been a solid result.

With his second-place finish at Silverstone, Leclerc has earned his best finish since Austria in July 2020. More importantly, Leclerc signals both he and Ferrari are finding pace again.  Did Leclerc benefit from Verstappen wrecking out and Hamilton being penalized by 10 seconds?  Sure.  But he also bested Lando Norris and held the lead for much of the GP before Hamilton did what Hamilton does.  This result is certainly one that all parties involved could use as Ferrari challenges McLaren for third in the constructor’s title.

Glad I’m ok. Very disappointed with being taken out like this. The penalty given does not help us and doesn’t do justice to the dangerous move Lewis made on track. Watching the celebrations while still in hospital is disrespectful and unsportsmanlike behavior but we move on pic.twitter.com/iCrgyYWYkm

Red Bull team principal Christian Horner still voiced his frustration and displeasure with Hamilton after the race, saying, “I can’t see how Lewis can take any satisfaction out of it when you have put your fellow competitor and driver in hospital.

“It’s disappointing. It’s very annoying. His actions have put in jeopardy another drivers’ safety and for me, that’s not acceptable.”

For his part, Hamilton reached out on Twitter to Verstappen, acknowledging the incident and thankful his rival came out OK.

Today is a reminder of the dangers in this sport. I send my best wishes to Max who is an incredible competitor. I’m glad to hear he is ok. I will always race hard but always fairly. My team showed grit and perseverance out there. It’s a dream to win in front of my home crowd??? pic.twitter.com/3S16uFYmDZ

Watching the race, I didn’t think the accident was anything other than that. A racing incident. Two drivers racing hard for the lead. Neither of them backed down, so both are equally responsible. Thank goodness Max wasn’t hurt.

I’m all for close racing and a good rivalry, but to shunt someone off the track at one of the fastest corners in all of F1 racing, that is crossing the line! If it was anyone but Hamilton, at his home track, the penalty would have been much more severe – not only from the stewards, but in its treatment by both the media and fans. Sadly, I see the incident for what it actually was – a calculated maneuver by a driver and team that know exactly what they are doing. I wish others in the media would have the courage to admit as much.

It reminded me of Senna and Prost.