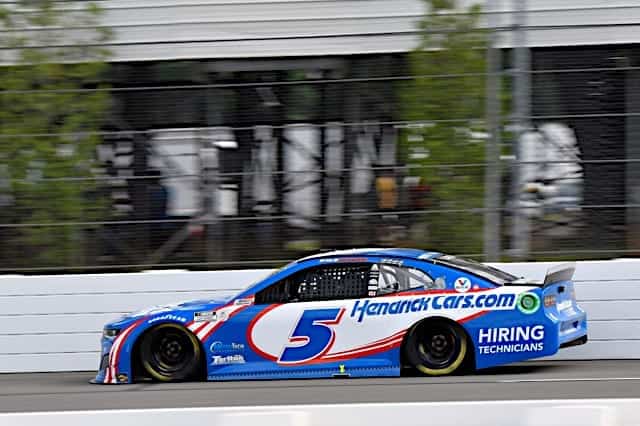 Kyle Larson has signed an extension with Hendrick Motorsports to stay with the team in the NASCAR Cup Series through 2023, according to The Associated Press. The team confirmed the news in a press release.

Larson will have sponsorship from HendrickCars.com in the majority of races (35).

The website has been aboard the No. 5 Chevrolet for 14 events so far this year.

Valvoline will sponsor Larson in 2022 for three races.

HendrickCars.com will also sponsor Larson in his non-NASCAR events. It can be seen on his sprint car this week.

Rick Hendrick told the AP that Hendrick Automotive wanted to be on the car. “My dealerships, the general managers and the employees, they didn’t want anyone else on the car,” he told The AP.

“The chance to extend my contract with Hendrick Motorsports and have such an awesome sponsor in HendrickCars.com are things I don’t take for granted,” Larson said in a release. “I feel like I’m driving for the best team and the best sponsors in the sport. To know that our on-track performance is having positive business influence off the track is very important because I want to return the incredible support they’ve given me. Everyone at Hendrick Automotive Group has made me feel like part of their team, and it’s exciting to be able to represent a company that loves racing like I do. I feel like we’re just scratching the surface of what’s possible.”

Larson has won four Cup events this year and sits second in the point standings. He joined Hendrick this year after being reinstated by NASCAR following his suspension from competition in April 2020. He said a racial slur during an iRacing event and was let go by Chip Ganassi Racing, where he began his Cup career in 2014.

I’d like to thank @HendrickAuto through their https://t.co/V0Ioi5wIP5 brand for partnering with me and building a successful program around the No. 5 team. It’s really cool to see how our on-track success has helped their business. Let’s keep it rolling! pic.twitter.com/QhPEeoSpM7

We have a lot to learn about dirt racing, but there’s no better guy to teach us the way. pic.twitter.com/RESX2HC1zD

i can’t recall, are all the hendrick drivers locked in for atleast the next year or two?

Read the article instead of just the headline. SMH!

must really be nice to be perfect

It’s actually nice to be literate.

I gotta know, by any chance are you a school teacher?

My parents were English and Journalism teachers. However, the main thing I got from that is my love of reading, plus a highly critical view of reportage. They would be appalled at what passes for journalism today.

Did they teach you any manners or couth?

I didn’t ask because of your writing skills.
I asked because grade school teachers are used to talking down to people because they are used to being the only adult in the room, they always get the last word in because it’s their class, and they are always “right” for the same reason.

BTW, there is no journalism left any more. It’s about “clicks” on the internet, ratings on TV and print is pretty much dead because it takes too much effort.

How about that, I was in the IT department of a brokerage firm for 30 years. I agree with “good money, but not much else to recommend it” but I stuck with it and collected the good money so I could retire way early.

When did I ever say I was a writer? Again, please try to read for comprehension. My parents were the teachers and writers. My work was in the computer field. Good money, but not much else to recommend it, which is why I made a mid-life career change.

And sad to say for your sake, I am having a super good day.

i am literate, but unfortunately i read the piece at lunchtime. i guess i just skipped over the data below the final picture.

it doesn’t matter, you seem to find fault with everyone.

He’s a museum quality specimen of the Kruger-Dunning effect.

Let us know when you’re gonna walk on water. Perhaps do a livestream of it.

Where else is he gonna go? LMBO!

No surprise there. You win 4 races in a season (and it isn’t even over) and you are going to get a contract extension or stolen by another team.
As Red Sanders said, “Winning isn’t the only thing, it’s everything.”

Kyle Larson yeahhh. The Hendrick dealership group is smart to lock in such a talented driver. Rick is a genius still. I know Tony would have tried to steal him away for sure. He knows Kyle is maturing as a driver.

Tony has lost interest in SHR. He has become a silent partner while he pursues his other interests. And Gene Haas reportedly didn’t want Larson. He self-sponsored Kurt Busch for years and didn’t want to go through it again. The Fat Felon has deep pockets and 3 drivers with excellent sponsorship to dip into for funds. He’s not a “genius;” he’s a businessman who has spent his life in shady dealings.

And the best news of the day is that NASCAR has finally cracked down on Chad the Cheater and his deep dive into the “gray area of the rule book.”

The best driver in the world right now is Lewis Hamilton. Kyle Larson isn’t even fit to carry his jock. But then again, you don’t have a crush on Hamilton, do you, Matilda? Wrong skin color.

For Christ’s sake, can’t we all just unite in our love of racing and stop being jerks to each other? I don’t care who started it or finished it, it’s just sad to see people fighting over petty things instead of commenting about the article itself.