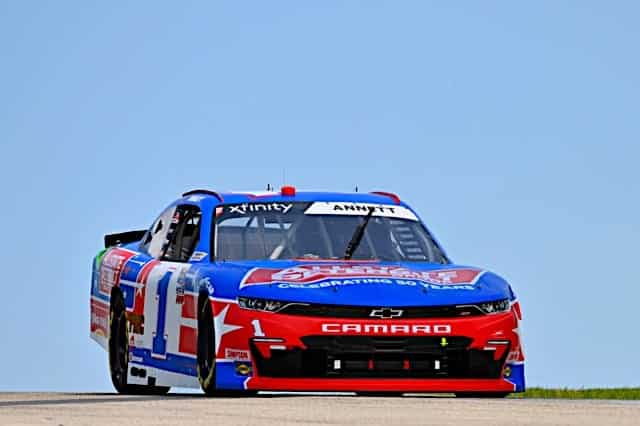 Annett missed the Corn Belt 150 at Knoxville Raceway Friday because of the injury and felt hopeful about racing Saturday. Unfortunately, the injury wasn’t in his favor.

Filling in for Annett is Austin Dillon, driver of the No. 3 Chevrolet in the NASCAR Cup Series for Richard Childress Racing. JRM’s Director Of Competition Ryan Pemberton spoke to several drivers about filling in for the injured Annett, including Josh Berry, Jordan Anderson, B.J. McLeod, before ultimately landing on Dillon.

McLeod stated it was “a dream just to be considered” for the seat and it came down to Dillon fitting better in the seat than McLeod did. Annett said he is working with a NASCAR director, which usually indicates he will get a waiver and the playoffs would be unaffected.

Dillon will have to work his way through the pack with the No. 1 Pilot/Flying J Chevrolet due to starting in the rear because of the driver change.

How did he injure his leg