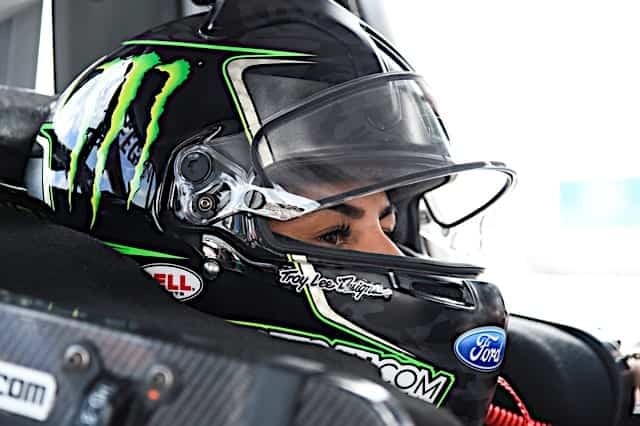 She will join Chase Elliott as the two non-series regulars in the Fairgrounds Speedway event.

The series will wrap its six-race inaugural season at the Fairgrounds in Nashville on Saturday, July 10, at 8 p.m. ET, with TV coverage provided by CBS.

“SRX has been a blast and I’m super pumped to run the finale at Nashville,” Deegan said in a press release. “Knoxville was a great experience and finishing second to Tony Stewart was a huge accomplishment. That was on dirt, so I’m definitely interested to see what these SRX cars feel like on pavement this Saturday night at Slinger, and one of the best things about racing Nashville is that I can take what I learn at Slinger and apply it there.”

Deegan made her first SRX start at Knoxville Raceway and finished second to winner Tony Stewart.

“We all saw at Knoxville how quickly Hailie adapted to these SRX cars and it was pretty obvious that she has no reservations about mixing it up with these guys,” SRX series co-founder Ray Evernham added. “She gained positions in each heat and in the feature and then finished second to one of the best racecar drivers in the world. Hailie has definitely earned her spot in the Camping World SRX Series.”

She’ll compete in the upcoming race at Slinger Speedway, too; she will have competed in half of the races this season (three out of six) by its end.

2013 Indianapolis 500 winner Tony Kanaan and Deegan combined have piloted their SRX entry to sixth in the point standings.

Deegan is currently in her rookie season in the NASCAR Camping World Truck Series, 17th in points.

The new Danica has arrived with the fawning press drooling over her for no other reason than she has a vagina. Oh yeah she’s cute and perky. But like most of the new ‘stars” her family is wealthy. How long can NASCAR’s fans relate to this?

If you remove the gender issue there is nothing unique about her.
Nepotism and wealthy families buying access to rides has been the pathway for new drivers since before Danica.
What will happen as the drivers who preceded them retire?