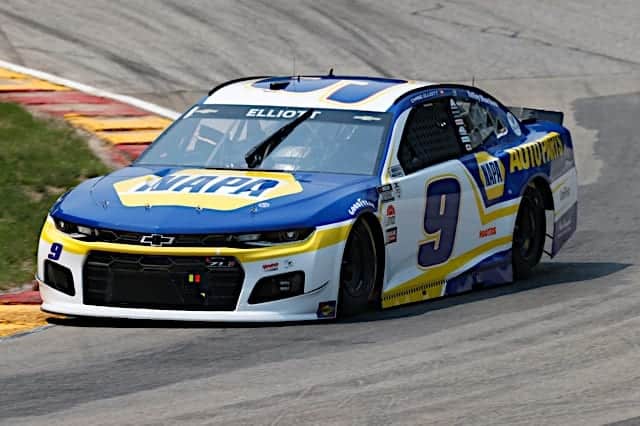 The No. 9 Hendrick Motorsports driver looks to rebound from an early retirement in his first trip to the 1.54-mile racetrack in March.

All four Joe Gibbs Racing Toyotas round out the top five, with Kyle Busch leading the way on the front row. Denny Hamlin begins third, Christopher Bell is fourth and Martin Truex Jr. lines up fifth.

See also
Waid's World: A Bit of Atlanta History – From Changes to Confusion Over a Race Winner

As is the case at most tracks without regular qualifying this season, an equation based on drivers’ performance was used to set the lineup. Driver’s and car owner’s finishing position (weighted 25% each), fastest lap from previous race (15%) and rank in owner’s points (35%) were combined and whoever had the lowest number started first.

Given to him it should read. I totally despise how the starting lineups are being set when there is no qualifying.

Couldn’t we at least have a one hour practice session snd use the practice speeds to set the starting lineups?

Another possibility is they could have a random draw for the top 20 finishers of the previous example of Brian’s product. That way, if Flubba happens to finish in the top 20 NA$CAR could find a way to give him the pole position, which is the only way he could ever get it.

Yes, the country is supposed to be getting back to normal, why is NASCAR dragging it’s heels.

I went to the tracks website and was surprised at the restrictions still in effect. Give it has lifted everything here in ga. Cup haulers don’t roll in until early Sunday morning!

So what’s next ajax give the entitled one a instant win.

Something, is starting to smell, fishey, an I don’t think it’s the fish !!!

Echo, don’t play at being me. I wouldn’t have made 3 grammatical errors in one sentence or misspelled “fishy.”

Maybe at this point, it has less to do with the pandemic than it does as a cost-saving measure for the teams. If the teams don’t have to be there until Sunday morning, it saves the expenses of two days on the road, plus the tires they use in practice and qualifying.

Maybe some crack investigative reporter could find that out for us rather than just posting info from other web sites, not to mention that anyone who really cares could figure out the starting lineup for themselves.

In any case, the weekly complaints about this are as stale as last month’s bread.

As a spectator, should I care how much it cost them to put on the show?

No. But since they have the cars, if they don’t put them out there it doesn’t matter what we think.

I never sit down and watch a football or hockey game and wonder about the finances or whether or not the owners are making a profit. Likewise I’ve never went to see a movie and worried about the poor movie studio.
That is why it isn’t left up to the owners. It’s NASCAR’s game and if they say there is qualifying and practices then the owners of the car will show up.

I frankly don’t see what practice or qualifying do to improve the “show.” When Chad Knaus coined the term “winning practice,” I thought NASCAR had reached a new low.

Bingo jobe it’s all about the money and always will be. It helps out the little guy and gives more family time to all. At least this way they should run harder to get a good starting spot. Unless your the entitled one and he knows he ‘ll be starting mid field or worst.