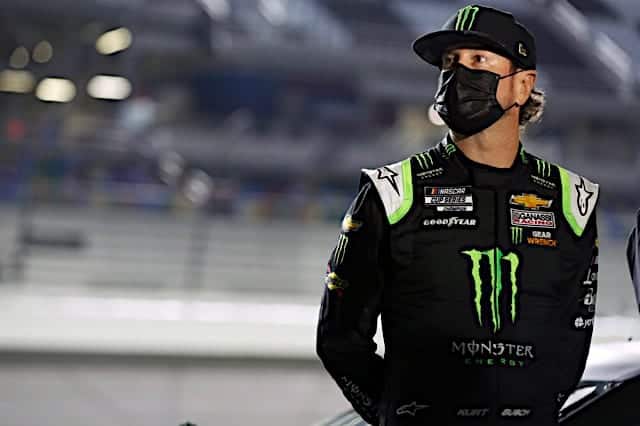 Trackhouse Racing has bought Chip Ganassi Racing’s NASCAR operation and that means a lot will change when we enter the 2022 season.

Trackhouse Racing will have two charters for next season and be a two-car operation while Chip Ganassi Racing will essentially no longer exist in the NASCAR Cup Series. Trackhouse announced that its current driver Daniel Suarez will return to seat for one of its cars in 2022.

The future of the two Chip Ganassi Racing racing drivers is still up in the air. The team currently fields two cars for drivers Kurt Busch and Ross Chastain. There is no word on who the second driver will be for the organization, but Trackhouse Racing team owner Justin Marks said both Chastain and Busch are top candidates to take over the second ride.

That got us thinking: who should Trackhouse hire to drive their second car next season, Chastain or Busch? Clayton Caldwell and Joy Tomlinson debate.

See also
Justin Marks: 'I Don't Want to Get Over My Skis' After Chip Ganassi Acquisition

Kurt Busch Is the Guy

Trackhouse Racing should keep and hire Busch to be a teammate to Suarez for the 2022 season. Chastain is a great driver and has a big future in this sport, but Busch would be the guy I would go with.

There’s nothing better for a young driver trying to find his footing than having a veteran teammate who can help his growth. Just for Suarez’s benefit I would hire Busch. Busch has been a Cup Series driver since 2000. When the 2022 season begins he will have over 750 starts in his career. There isn’t a racetrack Busch hasn’t been to (aside from the Indianapolis Motor Speedway Road Course).

All that knowledge can help a driver like Suarez who is still trying to find his way in the Cup Series. I know Suarez will have four years of experience under his belt come 2022 but Busch’s guidance and knowledge would be something Suarez could benefit from. Where to brake, how a car handles and what to do in certain situations are things where Busch can help Suarez. Chastain just doesn’t have the experience, or the knowledge Busch has from 22 years of racing in the Cup Series.

Plus, Busch is still very competitive. Since he rebuilt his career after being fired by Team Penske at the end of the 2011 season, he has yet to miss the playoffs. Even this season, it looked like the No. 1 car was surely going to miss the playoffs. After 12 races this season Busch was 20th in the point standings. Yet just seven races later, Busch finds himself 14th in the standings and trending forward. If the season ended today Busch would be in the playoffs. It just shows that even though he is going to be 43 years old at the start of next season, he still has the ability to drive well and be competitive when he has the right equipment.

Perhaps most important is that Busch has been around long enough to know a good employee when he sees one. Racing has been, is and always will be a people’s sport, no matter what anyone else tells you. If you don’t have good people your team will never be successful.

Busch has been on successful teams and winning race teams for the majority of his career. He also has some experience with teams that struggle. Having someone on your team that can decipher the difference between a person who can help a team be successful and a person who cannot is key, especially for a team that is still building like Trackhouse Racing. – Clayton Caldwell

Ross Chastain should drive for Trackhouse next season

Why? Well for one, he has a lot of experience racing in NASCAR already. Of course, not as much as Busch, but he’s been around since 2011. In Cup, Chastain was finally starting to get his bearings since joining Chip Ganassi this year until a trip to Pocono Raceway dropped him back two spots to 22nd in the standings. Still, he has two top fives and four top 10s on the year, three of those coming in the last six races. He’s done well during his time with the team, finishing in the teens nine times in 19 races.

Previously, Chastain drove for Premium Motorsports, an underfunded team, in 2018-19 before filling in for Ryan Newman at Roush Fenway Racing in three events last year. It seemed like his current CGR No. 42 team was gelling together, and then this news hit.

The Watermelon Man also has a varied experience in the Xfinity Series, though most of his starts came with JD Motorsports and Kaulig Racing. While competing for JD from 2015-18 and 13 races in 2019, Chastain grabbed two top fives and 13 top 10s. He then joined Kaulig for six events in 2019, earning a victory, two top fives and four top 10s. He brought home an additional 15 top fives and 27 top-10 results in 2020 for Kaulig, finishing seventh in the standings.

Oh, did I mention he ran three events for CGR in 2018? Chastain won at Las Vegas Motor Speedway and was second at Richmond Raceway the following week.

He’s also proven his worth in the Camping World Truck Series, taking home three trophies, 17 top fives and 42 top 10 results in 95 starts. Chastain rallied to a runner up in the point standings for Niece Motorsports in 2019, the team’s highest-ever ranking in Trucks. He rejoined the team in four events so far this year and has one top five and two top 10s so far. Chastain would have had another top 10 if his truck didn’t fail post-race inspection at Texas Motor Speedway. Still, it’s quite remarkable what he’s done for the smaller team. If he can do things like that for underfunded organizations, what could he do with Trackhouse?

Plus, he’s only 28 years old and can help build Trackhouse Racing for years to come. Neither Chastain nor Suarez are strangers to Cup racing (and NASCAR in general); both have victories in NASCAR’s national series. Suarez himself is about one year older than Chastain and they have been with multiple teams. They could work well together if given the chance, and I’m sure Suarez would like to have another teammate after running for Gaunt Brothers Racing and Trackhouse in single-car operations the past couple of seasons. – Joy Tomlinson

I agree with Clayton Caldwell, Kurt Busch should be the guy so he can help Daniel Suarez out with all his experience in racing and he just might get Trackhouse Racing a few wins along the way. Also I’m a big Kurt Busch Fan ever since he took over the 2 car for Penske Racing and would like to see him with a ride next season.

Come on, Busch is on the edge of retirement, really on the edge. Suarez isn’t a rookie, he’s been around a few years. He knows the ropes.
If the choice is between Chastain and Busch and you’re planning on being around for a while, it’s got to be Chastain.

I think either driver will benefit Trackhouse. Still, I can’t for the life of me see Busch wanting to help another new team find it’s footing. He did that at Furniture Row.

I agree either driver would have their upside. Busch would be huge help (especially with the new car) but it’s a dead end. Chastain is young and has shown tremendous potential. Suarez has already been flirting with the top 15 every week. I’m not really a fan of any of them (although Suarez has been turning my head this year) so I really don’t care what they do. Just speculating.

Unless Kurt REALLY wants to race some more, I think you’re original thought of Kurt going in the FOX booth next year is a good idea. He’s savvy, driving wise and technically. The timing would be perfect for him.

Chastain. This team’s identity is significantly formed around Suarez and challenging his position as the top driver or the primary driving identity of the team would be a mistake in my opinion. Busch’s experience means less with the new car, too. See how Jimmie Johnson struggled a bit with the current iteration or how Richard Petty struggled from 1988 with the shorter wheel bases after a revival in 1987. Chastain can relate to Suarez and I think all Trackhouse sponsors would be okay with Chastain also representing them.

I also think 23XI should buy the 43 and keep Erik Jones. I trust Jordan and Hamlin with the 43’s legacy, there is sponsorship overlap, and Jones has experience with Toyota.

If that happened, that does leave Kurt Busch out in the cold in terms of highly competitive rides.

I doubt Chastain will ever be more than a mid-pack driver. Sadly, the same is also probably true of Suarez.

Kurt Busch would be great for any team wanting an instant boost. Harvick and MTJ are in the same age group and I’d like to see them all stick around for another year or two.