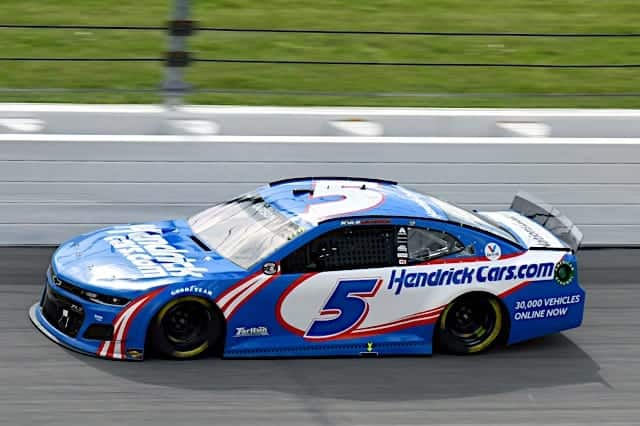 Kyle Larson will look to continue his winning ways as he starts from the pole in Saturday’s (June 26) NASCAR Cup Series race at Pocono Raceway.

The No. 5 Hendrick Motorsports driver has been on a roll, tallying three points victories in the past month as well as the All-Star Race two weeks ago.

Larson begins alongside his teammate William Byron on the front row, while Ford drivers Kevin Harvick and Joey Logano make up the second row. In fifth is Kyle Busch in his No. 18 Toyota, the first of three Joe Gibbs Racing cars in the top 10.

Some other notables outside the top 10 are Martin Truex Jr. in 15th, Brad Keselowski in 18th, Ryan Blaney in 27th and Chase Elliott is 29th after the lug nut penalty at Nashville.

Four categories were weighted and added to set the starting lineup: driver’s and car owner’s finishing position (25% each), fastest lap from previous race (15%) and rank in team owner’s points (35%).

Sunday’s lineup depends on where drivers finish on Saturday, as positions first-20th will be inverted (the winner will start 20th, second place will start 19th, etc.). Drivers who finished 21st-40th will begin in that same position on Sunday.

They need to start qualifying again. I’m tired of the race already being tilted toward those that did well in the previous race before anyone even gets in a car. It was a necessity during the pandemic but now it’s just laziness and cheapness. Otherwise just use a random draw. Fair to everyone and no correlation to the previous race whatsoever.

I agree with a random draw.

Bob
Reply to  Bill B

Certainly agree. If they qualify then we won’t have to have that extra stage at 35-30 laps.

Bill B
Reply to  Bob

“Gets” “Snags” “Secures”.. I can just see the editorial meeting when they all sit around and come up with words they can use other than “wins”. Please start qualifying again, this is beyond ridiculous now. And agree with Bill – if they must keep this farce going, at least make it a random draw (and this is an HMS fan saying it).

i don’t understand why they’re not qualifying. the track is operating at 100% capacity. state restrictions ended 5/31. this is crap.

getting is a joke. he didn’t have to do anything to “get” it.

if na$car keeps doing this, they need to invert the top 12.

just more of the rules and regulations being written in pencil for constant changing.

NA$CAR knows the cars they want at the front and they’ll do what they can to get them there. The rules and regs are written in disappearing ink.

Let’s make it a tad more interesting and invert the whole field based on championship points standing every week. It’s been proven time and again starting at the back is nothing more than a minor inconvenience for the big teams, so the same guys should still be in the top 10 at the end. Would create more entertainment/racing as they work their way through the riff/raff rather than putting the also rans out back from the very start. At least this way, the backmarkers would be a part of the racing action – there would actually be passing during the race (and not only during pit stops) for a change!

I dont believe there is any reason for qualifying any longer. It doesn’t impact the race at all and is just a waste of time and money.
A random draw would be better than the way they are doing it now. But the smart guys will figure it out I’m sure.

Tell that to Aric Almirola.

Kyle Larson On Cup Pole Due To NA$CAR Formula

Nascar will throw a chicken on the track to stop Larson. Brian’s responsibility.

Race for points in the first 2 rounds, then drift back and try for P20.

To me, this would be the only way to have a chance to beat Larson’s vastly superior car.

Of course it’s the car…. there’s no way it could be the driver…. because you don’t like him.
But Busch winning in the Xfin and truck series is legit,,, because you like him, right?

Of course, it’s generally both car and driver. But Busch had to work for his NXS race at Nashville when Larson just cruised in the Cup race.

This has happened before, like when Bill Elliott won 11 races in 1985 and pretty much lapped the field in the Daytona 500. Sure, he was a good driver, but it was obvious he had a much faster car than anybody else.

Having Larson start P1 in every race and giving him the first pit stall with the aero advantage he has being in the lead means he really isn’t proving anything.

Yep, if you spin things just right, it all makes sense.

I think the world is spinning to fast for her.

LOL
I don’t know why we even run the races. If Larson is on the pole it’s pointless.

Matt-ilda, you’re the one caught in an endless spin cycle.

Where am I today? Still playing Where’s Waldo with a map on a dartboard?

No, but you’re still clueless and senile.