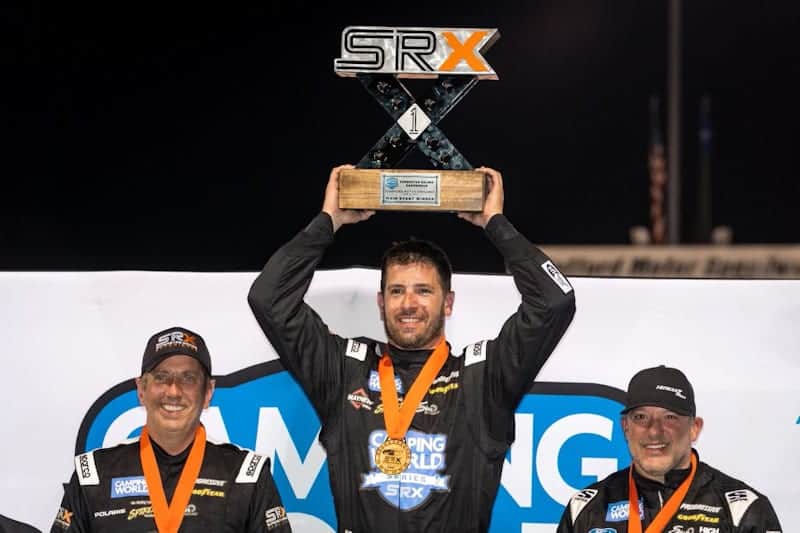 How was the first week of SRX?

The first week of the Superstar Racing Experience was a critical success, despite some hiccups.

One thing I really liked about the broadcast of the event is that they never seemed full of themselves. While FOX Sports spent the weekend patting itself on the back for its NASCAR coverage, CBS … just covered the race. It didn’t rave about its drone cam, it was just there. It was nice to watch a broadcaster have obvious fun producing a race and it not coming off as forced or taking attention away from the racing itself.

Probably the biggest issue SRX had in week one was running way too late, going around 20 minutes out of its broadcast window. There were a couple of other things such as the numbers/names on the cars being too small, but it has already corrected these issues for this coming week.

It should be mentioned SRX said in a press release that several of these rules would be in place starting at Knoxville Raceway.

SRX will also remove the windshield prior to the dirt race, because that is common sense.

The rules make a lot of sense once you remember that Knoxville is a dirt track and wouldn’t survive a 100-lap feature event. Keeping the main at 50 laps should be good both for track prep and for the race itself.

The main’s lineup being determined by average finish in the heats was the right move to make as well, because there was no incentive for non-full-timers to actually race in the first heat. There was talk about maybe giving drivers tires between races, but a shortened event like this one should circumvent any tire concerns going forward.

One thing I really liked about SRX, and one that NASCAR should take a look at, were the heat races.

The heat races were basically what stages were advertised as: time for the broadcast to go to full screen-commercials and interview drivers/add color to the broadcast.

I would not mind if NASCAR’s stages were set up in this way. Two 30-minute stages with 15-minute breaks after both, followed by a 100-lap or 200-mile-or-whatever third stage could be a lot of fun.

Maybe NASCAR should not use things SRX does like give drivers laps back or invert the field. But the basic structure of how these races work could be much better than the current stage format, and fans won’t feel cheated by NASCAR wasting so many laps every week during the stage break cautions.

One problem NASCAR has had recently is exposing more of its core fans to the personalities involved in the sport. Not everybody watches hours of pre-race and 10 hours of daily studio shows per week; a lot of people just tune in on Sunday for the race. Breaks between timed stages would be able to allow FOX and NBC to showcase interviews or video packages that does bring that extra perspective, even for drivers not necessarily running up front every week like Ryan Preece.

Having the breaks would also allow TV to front load a lot of its full-screen commercials in that time block. There was never a full-screen ad break for SRX while the race was going on, which gives the audience less incentive to flip through channels. You can’t do that in a three-hour NASCAR race, but frontloading commercials during breaks could cut down dramatically on the number of times the network cuts away from a race in progress.

Who will drive for GMS’ Cup team?

GMS Racing, a pretty major Camping World Truck Series team, announced June 17 that it will be moving up to the NASCAR Cup Series in 2022.

GMS was in play a few years ago to buy the remains of BK Racing but decided against it and chose to focus on other series. This ended up being a smart move, as the BK equipment was reportedly old uncompetitive chassis and engines seemingly being held together by bubble gum and duct tape.

GMS is the fourth team we know is either moving up to Cup or looking to expand in Cup, joining 23XI Racing, Trackhouse Racing Team and Kaulig Racing. This is yet another Chevrolet team, which is good for the Bowtie with how strong the new, more united Chevrolet engine program has been.

The interesting thing here will be who ends up driving the car. GMS has a number of different options, starting with the in-house possibilities of Zane Smith and Sheldon Creed. It could poach a driver like Josh Berry or John Hunter Nemechek. Maybe it could even go the veteran route with Kurt Busch or Ryan Newman. It’s always better to not know who could drive due to so many differing options than not to know due to having no real options.

Will Hendrick win a guitar in Nashville?

This weekend will mark the first NASCAR national touring series weekend at Nashville Superspeedway since 2011 and the first Cup race in the area since leaving Nashville Fairgrounds Speedway after 1984.

The superspeedway is quite a bit different from the Fairgrounds, being a one-and-a-third-mile concrete oval. Thanks to the concrete, the surface is in relatively smooth condition still, even though it has been years since the last race on it of any kind.

Considering how sister track Dover International Speedway doesn’t really penalize teams for excessive tire wear as long as they have clean air, don’t expect tires to play a part in the finish of any of this weekend’s races. Passing will be at a premium this weekend, even with the Cup cars running the 750-horsepower engine package.

As funny as it would be for Kyle Busch to win and once again destroy the guitar in victory lane, this is still Hendrick Motorsports’ summer to dominate. Of the four Hendrick drivers, my pick is William Byron to win this weekend; he’s due for a win, and that car has been running too good recently not get that second win this season soon.

One and two: SRX sucks. It’s nice for the tracks hosting and for the one young guy who will win each week, but it has no general appeal. Who wants to see a bunch of fat old guys running into each other?

I think the SRX series being different is fine. It works for what they’re trying to do in the timeframe/budget they’re working in. I do not see heat races and breaks in the action working for NASCAR. That’s not what this series has ever been about. It’s historically been about speed and endurance. Why else would they run 500 miles at the limits of their cars? Granted, that was a bit more of a feat in the 1950’s and 60’s…

Or think of it this way. Years before the internet and hours upon hours of Sports Analysts jabbering endlessly about sports not the NFL, race fans had no problem learning about drivers. They were covered during the broadcasts, and if not there you could find tidbits in publications (which were printed on paper and manually distributed/purchased). Or by talking with other fans.

So no, I don’t want NASCAR to interrupt racing in favor of more gum flapping. If anything, I want them to go back to what they were before splitters, sideskirts, intake spacers, stage racing, Bristol’s repave, and the chase. OK, they can keep the Hans device, SAFER barriers and the Newman bar, but other than that…

I’ll take the SRX over the France Farce any time. It takes me back to the old short track days before Hollywood ruined racing. The cast of characters; racers and support people, add personality and ingenuity to make us old schoolers very appreciative. KEEP IT GOING TONY!

JW Farmer
Reply to  Fed Up

It’s not perfect, but you are right, some things are getting better. Hopefully the new car next year will bring the on track action back.

I don’t think after one race that NASCAR should consider anything SRX did. Let’s see how things play out week after week before taking a knee-jerk reaction.We are more than likely to see pros and cons in all the SRX rules as the weeks go by.
Do you really think Kyle would smash another guitar? I hope not. That was a very controversial stunt and much like burning books.

JW Farmer
Reply to  Bill B

Kyle is unique. He won the race and the trophy was his so he can do what he wishes with it.

Bill B
Reply to  JW Farmer

Never said he couldn’t. Just said it was controversial. I can’t say I’ve ever seen anyone gratuitously smash their trophy in any sport.

@Jeremy. Yours is the only comment that makes sense. I want to see 500 mile races and the end of stage racing plus a full SEASON champion, not an imitation of some playoff gimmick. Having that always forced the driver to get the best finish possible. Kill the DVP as well but keep all the safety enhancements. I remember the days where I could start my grill up, cook and then sit down to watch a race naturally unfold.

I think SRX only runs for 6 races. The ratings for the debut were just fair (1.3M viewers) and far from being considered a prime-time sports hit. Meanwhile, keep an eye on local CBS affiliates who might opt out of showing SRX and run syndicated programming in its time slot, instead. If the average viewership dips below the 1M mark per race then CBS will drop SRX after the end of the season.

jobe
Reply to  John I

Good point on affiliates opting out.

SRX is boring racing. Great to see the old drivers but they are past their prime. The heat race concept won’t work in NASCAR. Go back to qualifying in NASCAR and all would be good. Some things work great on dirt and heat races make sense there. As far as SRX, give me super dirt late models any day of the week over that junk. As far as the CBS broadcast, it sucked.

Can we give it a few weeks before we start comparing this series to another one? I realize you have to fill space on this site but this one could have waited a few weeks. Being the first week, I don’t think anyone thought this would be perfect. And they’ve already made changes for Iowa. And probably will make more adjustments as they go. Lets give the full 6 races a chance and then assess it afterward.