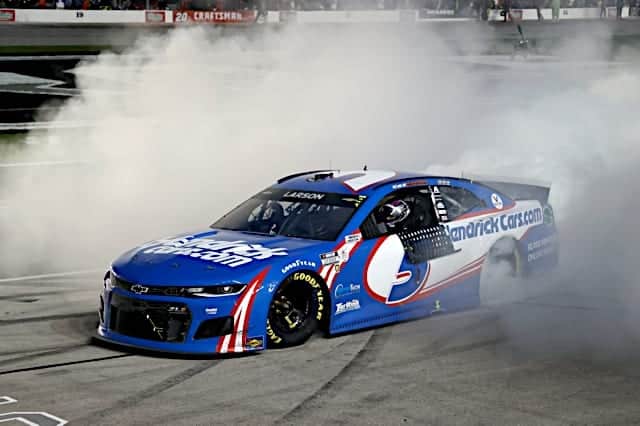 Kyle Larson won the NASCAR All-Star Race at Texas on Sunday (June 13) after a bold pass for the lead in the final round. Brad Keselowski, Chase Elliott, Joey Logano and Ryan Blaney rounded out the top-five finishers.

YUNG MONEY LARSON.@KyleLarsonRacin wins for the third week in a row, winning the #AllStarRace for the second time! (Via @NASCAR) pic.twitter.com/6Uo4etd9Yz

Ross Chastain, Tyler Reddick and Aric Almirola won the three stages of the All-Star Open to advance to the big show. Matt DiBenedetto sealed the final spot in the race thanks to the fan vote.

How did it happen?

The first round of the Open had multiple wrecks involving Bubba Wallace, Chris Buescher, Erik Jones and Daniel Suarez. Chastain used an impressive move to pass Reddick on the final restart to win the first round. Reddick and Almirola won the caution-free second and third rounds, respectively.

In the All-Star Race, Larson and Kyle Busch battled on the front row to start the race. After completing one lap, Christopher Bell got sideways and brought out a quick caution despite not hitting anything while making an incredible save.

.@CBellRacing, how do you do it? ? pic.twitter.com/ySpEPiczjR

Larson and Busch again battled on the next restart before the No. 5 pulled ahead with nine laps to go in the first round. Busch and Byron put up a good fight, but Larson held on to win the 15-lap segment.

The top-12 drivers were inverted for round two thanks to a random draw, putting Blaney and Kevin Harvick on the front row. Blaney took the lead while Harvick completely stalled out. Blaney and Keselowski had a side-by-side battle for the lead for most of the second round with Blaney ultimately staying out front and taking the win.

The entire field was inverted for round three, as Almirola and DiBenedetto took over the top spots. DiBenedetto got to the lead on the restart with help from Michael McDowell before eventually being passed by Alex Bowman with eight to go in the round. Bowman took the round three victory over DiBenedetto and Almirola.

A random draw for round four determined a top-nine invert, giving Byron the lead over Bell for the restart. Byron got to the front after one lap alongside Bell and Larson followed him into second place. Larson stalked his teammate for the duration of the 15-lap run but was unable to get around him with Byron getting the round four win.

The No. 5 of @KyleLarsonRacin makes a move, but it's not enough! @WilliamByron is your winner of Round 4 in the #AllStarRace. (?: FS1) pic.twitter.com/IfjPFRL3NY

Round five’s restart order was determined based on the lowest cumulative finish score from all four rounds. Byron, Larson, Elliott, Blaney and Denny Hamlin were the top five following the calculations.

Byron quickly got out front on the restart as seven cars pitted on the first lap to get their required green-flag stop out of the way. The pit stops were mostly clean until Kyle Busch and Austin Dillon were nabbed for speeding. The Hendrick quartet – already occupying the top four spots – pitted with 15 laps left in the round as Elliott jumped Byron and Larson with the fastest pit stop. That earned the No. 9 team a cool $100,000 bonus.

A caution came out as Keselowski was on pit road and he took over the lead ahead of the Hendrick group. The yellow was thrown after Chastain got spun by Ryan Newman deep in the field.

Up front, Elliott eased by Keselowski for the lead on the restart with 11 to go thanks to some help from his teammates. He went on to win the stage and set the No. 9 on the pole for the final 10-lap segment.

On the round six start, Blaney took Byron three wide as Elliott nudged out front in the third lane. Elliott appeared to be in a position to take the lead from Blaney when Larson jumped to his outside and got out front. Larson and Elliott battled side-by-side for the lead and made light contact, allowing Keselowski to nearly clear them. However, Larson stayed at Keselowski’s rear quarter panel and was able to get back out front and seal the victory.

WHAT A BATTLE FOR THE LEAD IN THE FINAL ROUND! @KyleLarsonRacin to the front! #AllStarRace pic.twitter.com/wmUIs93baR

It wasn’t a points-paying win, but it was the fourth time (third week in a row) that Larson visited victory lane in 2021. Sunday was also Larson’s second All-Star Race win after his 2019 victory at Charlotte Motor Speedway.

One of the best burnouts we've ever seen! ?@KyleLarsonRacin | #AllStarRace pic.twitter.com/0FoFBtHORo

Larson continues to amaze – even when no points were on the line. The package was different from anything we’ll see during the real season and it didn’t even matter. The No. 5 is just locked in right now. Larson has to be the favorite at pretty much every track for the foreseeable future, especially at the 1.5-milers. In yet another good sign for Larson, Texas will host a key playoff race in the Round of 8 this fall.

Keselowski was as competitive as he’s been since his win at Talladega in April. The No. 2 has been a tick off in recent weeks, finishing outside the top 10 in five straight races. The ASR doesn’t technically help change that, but it certainly doesn’t hurt. Rumors of Keselowski’s departure from Team Penske could be playing a role in their struggles; it’ll be intriguing to see how they manage that over the summer as Silly Season picks up.

Chastain finished 18th in a 21-car field and still impressed me all night long. He started at the rear of the Open and his crew chief was ejected after inspection issues. While three cautions enabled him to make up some ground in that first stage, the fact of the matter is that he still drove from last to first in 20 laps to win. In the ASR, he drove from 18th to ninth in 15 laps during the first round. He held his ground once he got track position but then had some trouble later. Still, it was another positive night for a driver on the rise in recent weeks.

Martin Truex Jr. was surprisingly a total non-factor at Texas. The No. 19 has had moments this season where it looks unbeatable. Then, there have been recent races like Charlotte and Dover International Speedway where the team is just way off. The ASR was among the latter performances, as Truex was out of the picture all night long – even with various inverts. It felt like every driver had a moment or two in the front due to the constant starting grid changes, but Truex was one of the few who hardly even made it on screen.

What did this race prove?

The All-Star Race should keep rotating tracks. After running the race at Bristol Motor Speedway last year and Texas this year, I believe a track rotation should be the new tradition. The ASR is probably played out as it is – one million dollars isn’t what it once was and drivers don’t have much incentive to ruffle any feathers. One way to keep it interesting is by consistently changing the host. Each city can use the event in its own way to promote the race differently.

The format was crazy and confusing and nonsensical and it might’ve actually worked perfectly. I just watched the entire ASR and still couldn’t explain the format to you. But what we saw in Texas – usually a snoozer of a track – was actually… dare I say, good? The short rounds were conducive to the track and the inverts frequently shuffled different leaders in and out. If the race does return to Texas next year, I would definitely favor the same format.

Paint scheme of the race

Busch Beer continues to shine with its special schemes for Kevin Harvick. The ASR was no different, as Harvick ran a space-themed “To The Moon” design to highlight the rise of stock-trading on social media in recent months.

The stars shined bright in Texas. On to Nashville! pic.twitter.com/vv5Pfey1HC

Last year, the All-Star Race was held at Bristol for the first time in history. Many expected chaos and contact, but the race was largely anticlimactic. Elliott had the dominant car, leading 60 of the final 79 laps and all 15 in an uncontested final stage. The race marked the debut of the choose rule while NASCAR also pushed back car numbers and utilized underglow. An All-Star event at Bristol seemed like a perfect idea; it just underdelivered in 2020.

This year, the ASR was held at Texas for the first time in history. Many expected no action or passing and the race was actually not that bad. The rules allowed for many different drivers to lead. It also gave a lot of them hope even if Larson winning, in the end, wasn’t unexpected. I can’t believe I’m writing this sentence, but Texas was better than Bristol.

The ASR doesn’t award any points for the season-long championship. Larson and Truex remain atop the playoff standings with three wins apiece.

The circuit heads to a new track at a historic location. Nashville Superspeedway will host the first Cup race in the city since 1984, a race at the Nashville Fairgrounds won by Geoff Bodine for Hendrick’s second win ever. The Ally 400 is set for Sunday (June 20) at 3:30 p.m. ET on NBC Sports Network, which takes over television rights for the final 20 races of the season.

The format was goofy but in a game show sort of way, it worked. I found it entertaining as long as I just went along for the ride without questioning anything. That is easy to do since it’s an exhibition race with no points.

The shocker of the night was who didn’t win the fan vote. I would have bet the farm on it.

I have to question the wisdom of holding it on a school night when most have to get up for work the next morning. I’d think that had they started 2 hours earlier, they might have gotten more to watch.

I think it was run on Saturday night in years past, but this year the inaugural SRX race was on Saturday.

And they were both epic fails!

i voted daily for matty d to hopefully get him the fan vote. when he did i figured someone would be crying.

Matty D is the one who cried when he finished second to Denny Hamlin 2 seasons ago.

Thanks for the thoughtful insight.

It was most appropriate that the unnecessary caution for Chastain getting sideways and regaining control led to a caution that gave Baby Busch the free pass. How lucky was that! When he got to be the first car a lap down everyone knew it wouldn’t take long.

Oh, like NASCAR hasn’t been giving “the call” to Hendrick Motorsports of late… give me a break

Reverend Joe was due for one. Mr. H will still get his share too. In case you haven’t noticed Penske won’t. Reverend Joe has a lot of catching up to do to make up for Johnson’s cautions.

Enjoyed it simply by ignoring all the rules and just going along for the ride as a viewer.

Its only racist if a white conservative speaks it