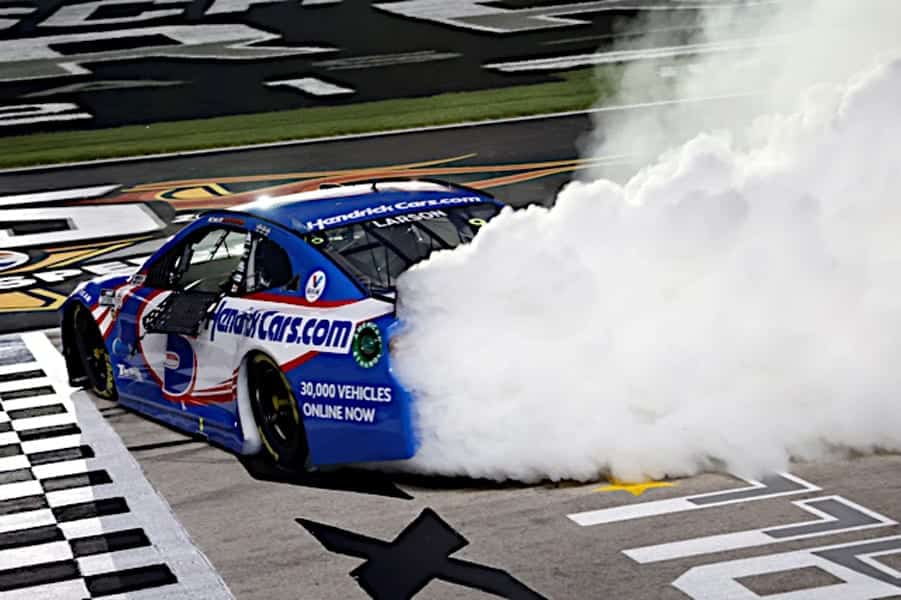 1. Does anyone have anything for Hendrick this year?

Hendrick Motorsports is pretty good at this racing thing. The group was the class of the field in the All-Star Race, where Kyle Larson took home his third win in a row. With all four drivers combining to win seven of the first 16 events of the season (including the last four points events), will anyone be able to beat them?

Well, there are a few venues coming up where other competitors have been successful, like Pocono Raceway and New Hampshire Motor Speedway. At Pocono, a Chevrolet hasn’t won since 2016 with Kurt Busch, while Hendrick itself went to victory lane in 2014 with Dale Earnhardt Jr. The Toyotas, and specifically Joe Gibbs Racing, have been more dominant recently there: Denny Hamlin took two of the past three events, while Kyle Busch won the two races before that.

The spring race at Atlanta Motor Speedway saw Ryan Blaney pass Larson late to take the checkered flag. Hendrick drivers have also struggled at NHMS, as it has been mostly Fords and Toyotas reaching victory lane. Keep an eye on Team Penske as well as Stewart-Haas Racing’s Kevin Harvick for this race, as Brad Keselowski won last year while Harvick won back-to-back in 2018-19.

However, there are also three more road courses before the playoffs, so we’ll probably see Chase Elliott and Larson shine once again.

2. Racing in Trucks was right move for John Hunter Nemechek

A driver going from the Cup Series to the Xfinity or Camping World Truck Series is rarely known to be a good thing, but I believe that’s the case for John Hunter Nemechek this year. He’s definitely a championship contender, earning four wins (including the past two), seven top fives and nine top 10s in the first half of the season. He’s already doubled his number of Truck wins in a single season and sits atop the point standings. In fact, he’s 78 points ahead of Ben Rhodes and has more than twice as many playoff points as the ThorSport Racing driver.

This weekend at Texas Motor Speedway, he and his crew chief played the right pit strategy in the end to win his second race in a row. While Elliott and others pitted for tires and fuel, Nemechek used the traction compound to set faster lap times than Elliott did with fresh tires and stayed out much longer. When it came time to pit, the No. 4 truck was so far out ahead of Elliott that the race win was already his (though if a caution came out, that would have changed the race).

It’s truly remarkable what Nemechek has done with limited practices this season. But like we saw in the Cup Series last year, the best in class may not win the championship. We’ll have to see if he’s able to take the trophy at Phoenix when that time comes, but for now he should be happy with where he’s sitting.

While all three Texas races saw multiple drivers spinning out and crashing into the wall, there were some instances where it seemed NASCAR threw out the caution too quickly.

The first one came in the Xfinity Series race when Brandon Jones started spinning underneath Riley Herbst. Jones didn’t spin all the way around, though, and he was able to continue on slowly without much damage. NASCAR waved the yellow flag due to him being off the pace on the racing surface. This was understandable, as he wasn’t on the apron at the time.

Another one came at the beginning of the All-Star Race where Christopher Bell slid around but saved it, regaining control and maintaining enough speed. The caution came out right away for this one, and many hoped NASCAR would let the drivers sort it out themselves without pausing the competition more than necessary. (As it was, there were already five cautions scheduled between rounds.)

The cautions may have come out more quickly due to the horrendous crash involving Trey Hutchens III and Johnny Sauter. NASCAR definitely doesn’t want to have an incident like that again, so it may have waved the yellow flag to ensure that the field would slow down enough so no one would run into them. But also, there were many wrecks in both the Xfinity and Truck races that damaged the vehicles severely. This could be why officials slowed the field down in those two incidents, in case the cars slid back up into the traffic or in the outside wall.

This weekend, NASCAR’s three national touring series head to Nashville Superspeedway, with Cup making its debut on the 1.333-mile racetrack. The Xfinity and Truck series haven’t been there in almost 10 years, so all three series will use as much practice as they can to get acclimated to the track this weekend.

NASCAR knows the surface of the track might have been worn down, so it laid down a resin and used a tire dragon there to help lower tire wear, according to FOX Sports’ Bob Pockrass. Even with this, tires might wear down quickly since it’s an older track that hasn’t been raced on as much.

Kyle Busch, Keselowski, Harvick and Joey Logano all have Xfinity wins there, while Busch and Austin Dillon won in the Truck Series. It still should be a learning experience for all drivers as they continue trying to find more speed and better strategies than the Hendrick stable.

I don’t know about you, but I’m excited for this race.

Team Penske has noticeably struggled so far this NTT IndyCar Series season but came close to winning at both Belle Isle events in Detroit this weekend. The first race saw Will Power leading in the closing laps before the red flag came out for a crash. His car wouldn’t re-fire on pit road and he was visibly frustrated after the race. Then, Pato O’Ward passed polesitter Josef Newgarden in the closing laps of race two to take home O’Ward’s second win of the year.

See also
What Mattered for IndyCar at Detroit

While it’s not the norm to be winless at this point for Penske, it does show that the team has improved throughout the course of the season. The team that has won four of the past seven championships (with Scott Dixon taking the other three) is coming up on some racetracks where it’s found previous success.

At Road America and Mid-Ohio Sports Car Course, both Power and Newgarden have victories; Power won one of the events at Mid-Ohio last year. Newgarden also won at the World Wide Technology Raceway at Gateway in 2020 and 2017, while Power earned the victory in 2018. Of course, there is a new venue this year in Nashville that could level the playing field; if it does, look for all four drivers to be in contention for the race win.

Complain when nascar throws the caution too fast.

Pick one and stick with it

Tom B
Reply to  Jake

I’m guilty of that. But it looks so obvious when it happens.

Larson is one of those racers who completely outshines all others. He’s a transformative racer in the same category as D Waltrip, Earnhardt, Gordon and Kyle Busch. With top notch equipment he will take wrecking ball to the Cup series.

And people like you are crowing him Champion of the World after a mid-season streak. It would be sweet justice if he were to dominate until Phoenix and then get whupped when it counts. He doesn’t deserve the ride he has.

So you either don’t like Larson, or are jealous of his success jo. He’s a natural wheelman, and any real racing fan should be able to realize this. You don’t have to be his fan, but don’t try to deny what we all can see.

I have several objections to the attention Larson has been getting. First, winning 3 races does not put him into the HOF. We’ll see how the rest of the season and the rest of his career play out, especially given that he still can’t attract sponsorship.

My second issue with him is that he was essentially rewarded for his mistake of last season and Rick Hendrick is self-funding a ride for him. And his “teammates” at HMS have apparently been given orders to give him a pass and refrain from racing him hard.

Third, he may be the natural talent that Kyle Busch is, but their records are not even remotely similar. Sure, Busch has been around longer, but Larson is close to 30, kind of late in today’s world to be restarting a career.

Finally, he appeals to the NASCAR fan who hates Bubba Wallace and who thinks Larson was some kind of “victim.” Larson is the favorite of the White Power crowd, even though he is part Asian. Another throwback to NASCAR’s racist legacy.

Never to late to restart a career. He loves to race, be it dirt or Nascar. Why should you care if Rick is sponsoring him, it’s Rick’s money. He’s a good kid from a small town. I’d never heard of Kyle Larson, I’d bought a home in Sonoma county and hired a crew to paint the interior. Turns out they were over in Calistoga to watch their friend race. When they showed up on a Sunday morning to finish my job I told them I just heard Chip Ganassi just hired their friend Kyle Larson to drive for him in Nascar. They were elated, said he was a great guy and racer. I’ve been watching him ever since. I find him exciting to watch because he is really good. No other reason. Take your whine elsewhere jo.

You may be a long-time fan of Larson’s, but you can bet that any fans he’s gained in the last year fit my profile of them exactly.

And yes, Hendrick can spend his money wherever he wants, but is he using sponsorship money from his other 3 drivers to offset Larson’s lack of sponsorship? I wouldn’t put that past a man who was convicted of felony bribery. I have never liked or trusted the Fat Felon and he has employed the two biggest cheaters in NASCAR history with Ray Evernham and Chad Knaus, who is “incidentally” overseeing the #5 team.

As for whining, isn’t that the whole point of Frontstretch comments section?

It’s your whole point I guess.

It’s also your point. Whining about the stages, the championship format, Bubba on the track, Danica in the booth seems to be your only reason for posting.

Reading skills help. I don’t even mention stages or championship format simple one. It’s Nascar’s game and I realize the futility of it. Whining lol Sorry jo, you have that covered very well. Lonely Little ol ladies with nothing else to do. So sad.