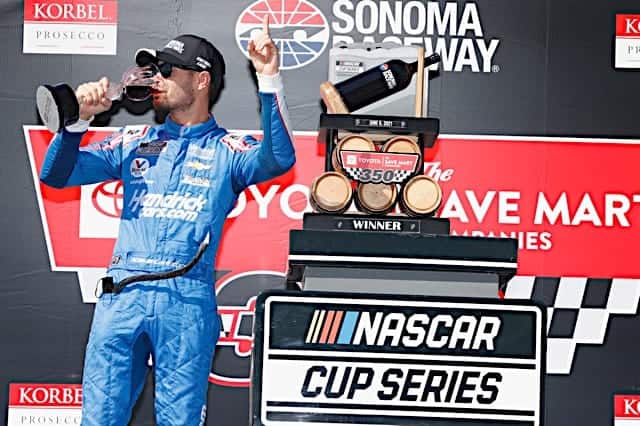 Kyle Larson is one of the more naturally capable drivers in motorsports today. Since landing on one of the best teams in NASCAR prior to the start of the year, he’s made the most of his second chance.

Along the way, Larson has been racking up the stats. Leading laps, winning stages, and finishing well have been regular occurrences for that No. 5 group in 2021. He has three wins and could probably have double that amount were it not for a few that got away. Now, another accolade is beginning to emerge: championship contender. Phoenix is still a long way down the road, but Larson is definitely in the conversation, and rightfully so.

Larson has finished first or second in the last five consecutive races. This unique accomplishment hasn’t been seen since 1996, when Jeff Gordon ran top two in six straight events. Gordon finished second at Bristol in August of that year. He subsequently won the Southern 500, finished second at Richmond, then went on to win the next three consecutive races. Gordon’s run ended the following week with a 31st at Charlotte.

See also
Up to Speed: Will a Teammate Battle Decide the 2021 NASCAR Championship?

While he didn’t manage to grab a win at Sonoma, Chase Elliott did extend his streak of top 10 finishes to six, a career high. Since Kansas, Elliott has been in the top 10 every week, including top fives in the last four races. There’s also more good news for Chase: the Cup Series makes its return to Road America in a few weeks.

The number five is haunting Brad Keselowski this week just a bit. Keselowski not only struggled with his fifth consecutive finish outside the top 10, but he has only five such finishes all year. Keselowski has had at least 19 top 10s every year since 2014 and has never ended under 14 when running a full time schedule.

Despite a win at Talladega, it has been a very up and down year for the 2012 champion. All of his top 10 finishes have been fifth or better. But he hasn’t finished better than 11th in the past five races. For a driver who had preseason championship aspirations, it’s a less than ideal situation, but there’s still time to turn it around.

See also
The Big 6: Questions Answered After the 2021 Toyota/Save Mart 350

The Xfinity Series also hit the road last Saturday for a few trips around Mid-Ohio. Andy Lally finished fifth, his fourth career top five in the series, all of which have been fifth-place finishes on road courses. But do you remember that Lally ran nearly a full year in Cup back in 2011, winning Rookie of the Year honors? In fact, Lally has a total of 38 Cup Series starts with a career best result of 18th in 2010 at Watkins Glen. He also qualified an impressive seventh for the July race at Daytona in 2011.

Noah Gragson just can’t catch a break. In 13 races this year, Gragson has failed to finish six of them, including the most recent outing at Mid-Ohio. All but one have been crash related, like how a simple foray into the grass sent parts of his car flying as though they had been launched with a catapult. When he does make it to the end, he finishes well. The seven times that he’s been on track at the checkered flag have led to five finishes of sixth or better. He just needs to see that flag wave through his windshield rather than from the garage.

Stole it huh Frank. I must have missed that part of his dominance.

Yeah, that really is a stupid title given the facts. LOL.

Kyle Larson is a great driver and the #5 has never seen a great driver (not even Kahne) since Mark Martin in 2009. Of course, Terry Labonte was the standard bearer of the #5 in the mid to late 90s and we all know Geoff Bodine started it in 84′ (why he calls himself Geoffrey now I don’t understand, but probably the same reason I go by JW instead of Joshua). Unless Larson collapses somehow or the team fails, I expect he will give the Championship 4 a run for their money. Mr. H must be extremely proud. I am no fan of racism, but Larson learned and became a better person for it and now dominance (not saying the entire season) but he would have 6 wins counting the ones he actually lost, like Atlanta. The #5 is on the marks.

I think Geoff changed it to Geoffrey because it wouldn’t be confused with Jeff.