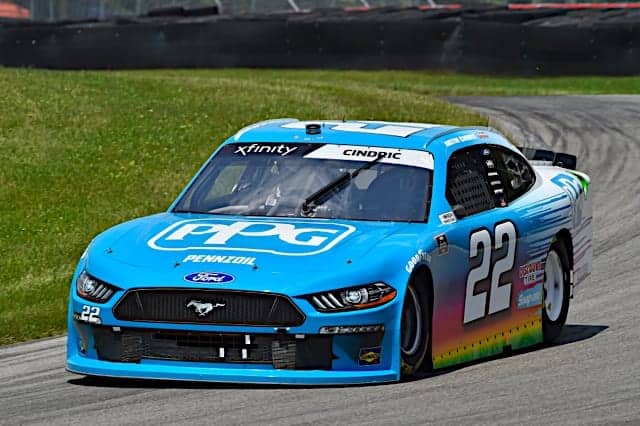 As the laps wound down on Saturday at Mid-Ohio Raceway in the B&L Transport 170, the race was Austin Cindric‘s to win — until it wasn’t.

With a lead of more than 10 seconds inside the final 10 laps, the last thing that Cindric needed was a caution, as that lead was enough of a buffer against A.J. Allmendinger’s hard charge from the rear of the field.

Cindric’s worst-case scenario, however, is exactly what happened, when Jeb Burton’s spin brought out the caution with seven laps to go, bunching up the field. Cindric, who opted to stay on track and retain the lead, restarted from the outside with four laps to go. A three-wide start commenced, and Cindric was muscled off-course as a result of contact between Ty Gibbs and Justin Haley.

Cindric: Sorry guys. That is the risk I took. That was as big loss.

The spin punted Cindric, who led a race-high 30 laps, back through the field, where he’d eventually finish 14th as a result of being both mired back in traffic and having a very short amount of time to make up the lost ground. As for Allmendinger? It swung the door wide open for him to go on to take the win in overtime.

“I was shocked that Cindric took the outside,” Allmendinger said. “The 54 opened the gap, I know these guys will do it to me so I went barreling in there when I saw the gap and I knew I was going to come out of the other side clean.”

It was a salvageable result for the Team Penske driver from the points side of things, but that was not the result that Cindric appeared to be headed toward. Cindric was going for his series-leading fourth win of the season as well as his fifth on a road course. Instead, he had to settle for the consolation prize of a solid points finish. Cindric currently leads the standings by 84 points ahead of Harrison Burton.

Cindric was not the only driver coming away from Saturday with bruised feelings as a result of a late-race bumping and banging. Gibbs, one of the multiple drivers involved in the jousting for position in the closing stages, appeared to take issue with Allmendinger.

I want a redo

In the post race interview Ty Gibbs said the 16 was kinda dirty there, so he had issue with Allmendinger taking it three wide. I guess Gibbs’ memory is not very good. He seems to have forgotten that during the overtime restart he took it four wide at the Daytona road course this year and then went through the dirt in turn one to pass his team mate on the way to a win. He’s lucky he didn’t knock the splitter off at Daytona and wreck himself or half the field. AJ was right when he said “I know these guys will do it to me.”

2Ford
Reply to  JD in NC

Not to mention Gibbs turned Cindric at Dover and Briscoe at Charlotte. Kid runs into everybody. Hopefully he’ll learn that if you race aggressively, you gotta expect them to do the same thing to you. That being said, Allmendinger using the 54 as a brake was definitely a questionable move.

I agree with you.

Great article. Wish that Fox or MRN would have interviewed Cindric to hear his thoughts. Kid dominates the race, was cruising to the win prior to Jeb Burton’s caution, so why no interview? This is the 2nd time in 3 years that Cindric dominated and lost the win at Mid-Ohio on a late caution. Feel bad for him. As for Allmendinger, he tore the whole right front off of Cindric at the Daytona RC (handing the win to Gibbs), and now Allmendinger used Gibbs as a brake at Mid Ohio (which caused Cindric to get wrecked), so I think it’s safe to say that Cindric is gonna start racing Allmendinger differently from now on. Allmendinger is a great person and a great driver, but he needs to race with a little more respect.

I watched a good deal of the race and I thought Cindric was robbed at the end.
AJ stole one courtesy of the double file restart. It wasn’t blatant but it was an “F everybody else I am going for it. I don’t care if I wreck the guys in front of me who were rightfully in the lead”.
Oh well, IT happens and paybacks are a bitch.

I dunno… it was a two-lap shoot-out, and it was going to come down the final restart. AJ had to be aggressive. If I was his car owner, I’d expect no less. Likewise, if AJ gets a retaliatory punt down the road, that’s just racin’.

Contrast it to the last 2 restarts in the Cup race with Larson, Elliott, Logano and Truex. The last two restarts were clean. They raced each other hard but none of them were willing to force it to the point where someone was going to be run off the track. Now farther back in the pack,,,, maybe not so much.