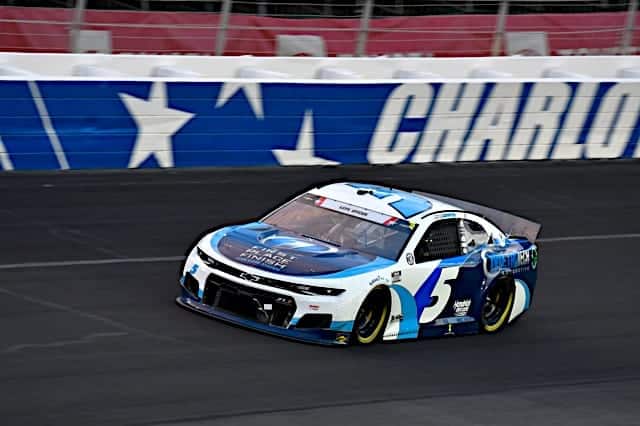 The NASCAR Cup Series is California dreamin’ as it makes the trip out west to Sonoma Raceway. Kyle Larson is on the pole for Sunday’s (June 6) Toyota/Save Mart 350.

The No. 5 Hendrick Motorsports driver took the position after a dominant performance in the Coca-Cola 600 last Sunday.

See also
NASCAR Mailbox: Over & Underachievers in All 3 National Series

A performance metrics formula was used to create the lineup, weighing and combining driver’s and car owner’s finishing position (25% each), fastest lap from Charlotte (15%) and team owner points ranking (35%).

he was awarded pole. no qualifying this coming weekend, so he didn’t grab the pole from another driver.

Agree. To imply that he did something to gain the pole position is, being generous, misleading.

An additional perk of having live qualifying is that there was no competition caution during the 600.

With the planned stage breaks, the last thing a race needs is another premeditated caution.

“Kyle Larson Gifted (With A Card From Brian) Sonoma Pole”

It would be nice if this pole award process became a relic of the pandemic. Like wearing a mask and social distancing.

How many drivers who could have actually won the pole never got a chance?

Card should be signed hugs and kisses Jim & Brian

I would think that if tracks are back to full capacity, those tracks should have practice and qualifying.

yes that was one good point at the 600 no competition caution.

We have learned that practice and qualifying do not make much difference in the outcome or quality of the races. I would expect to see much-abbreviated practice sessions in the future. The main value of qualifying well for a team is really just pit selection.

To me, this is pretty much a non-issue.

For a non-top-20 team it’s a chance to grab the headlines for a few minutes (and most weeks that’s their only chance).

At least have a one hour shake down in the morning.
MW grid walk should talk with non-top 20 teams to get them exposure. After all the top drivers just snub MW.

Ha! As soon as I see MW’s grid walk start I change the channel. I am sure I am not the only one. I don’t care who he is interviewing, I can’t stand him. So much for that being a good place to give the back marker teams some pub.

Just a waste of money and time. Means virtually nothing to the race

At least with very little practice being held, we aren’t subject to the headlines of drivers winning practices.

I had forgotten how much I hated reading that. Two thumbs up!