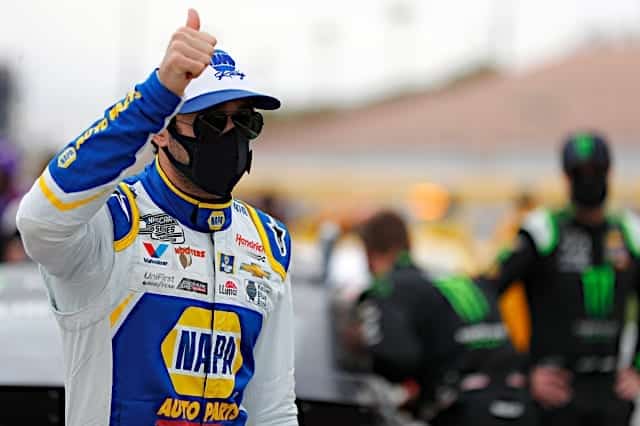 Chase Elliott has proven himself to be quite the road warrior, and Sunday he threw another win onto his pile of accolades. The second generation NASCAR champion has 12 career wins, five of which have come on road courses. Easily overlooked, however, is the fact that his first national touring series victory was on a road course. In 2013, Elliott muscled his way to a triumph at Canadian Tire Motorsports Park in the Truck Series.

The comparisons to his father’s Hall Of Fame career are naturally inevitable, but the younger Elliott is already showing substantially more versatility. Bill Elliott won 44 races, but they were almost exclusively on superspeedways. He only earned one trophy on a road course, his first Cup win at Riverside in 1983. Additionally, only two of his wins came on short tracks, a total that his son can equal with his next such victory. Chase has already outdone his dad on road courses and equaled him as a champion, and there’s sure to be a lot more stats added in the coming years.

But first, here are a few more notable numbers from a wet and wild Texas Grand Prix.

Kyle Larson finished second on Sunday, marking his third consecutive runner-up finish. The last time a driver finished second in three straight events was when Kevin Harvick did so in 2003, at Michigan, Bristol and Darlington. In addition to Darlington, Dover and Circuit of the Americas, Larson also finished in position number two at Atlanta back in March.

Michael McDowell may have been a bit of a surprise when he finally won his first race in the Daytona 500 this year, but it’s getting less and less surprising to see him in the top 10 each week. His seventh-place finish at COTA was the fifth such result for him, a career high for an entire season. Yet this year isn’t even halfway through, so in all likelihood, that number will probably get larger.

In the first nine races, Denny Hamlin had just one finish outside of the top five. In the five races since, he has just one finish inside the top five. No one can keep that kind of a streak up forever, but this team seems to have hit a proverbial wall starting at Talladega. Perhaps hitting the literal wall at Talladega has something to do with it. Those superspeedway races are known to do that sometimes.

Speaking of top five finishes, Ross Chastain picked up his first such result in Cup, winding up fourth on Sunday. Chastain, who was seventh in the Daytona 500, hadn’t done better than 14th since. It was also just the fourth top-five finish for the No. 42 car since the team’s most recent win in October 2019.

There are three Cup Series races this year held on tracks more than three miles in length. Since the first season back in 1949, there has never been more than one such track on the schedule for any given year. NASCAR races being long is certainly nothing new, but this adds a unique element to an already physically demanding schedule.

The win in Austin gave team owner Rick Hendrick his 268th Cup victory, which tied the organization with Petty Enterprises for the most all time. Interestingly enough, that’s about where the similarities end. Consider that the first and final wins by the Petty team were 50 years apart, while Hendrick Motorsports compiled the same number in just 37 years. Only eight drivers won for the Petty team, while 20 have wheeled HMS cars to the winner’s circle. Petty won 10 championships between only two drivers. Hendrick Motorsports? 13 titles among four drivers.