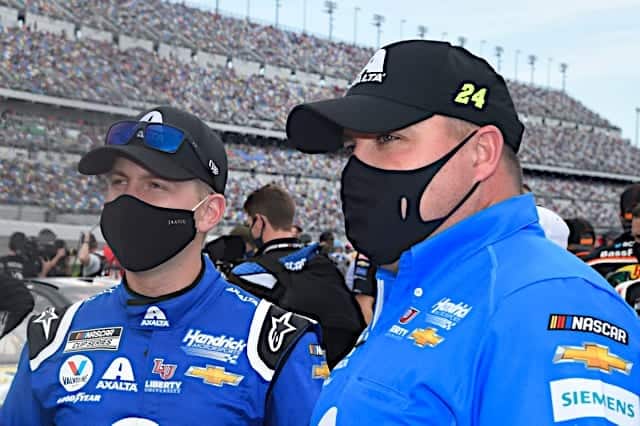 Four NASCAR Cup Series crew chiefs have been given monetary fines following the post-race inspections for the Drydene 400 at Dover International Speedway last weekend, May 16.

Rudy Fugle, Randall Burnett, Luke Lambert and Trent Owens are the crew chiefs for each of those teams, respectively.

Each of the four penalties were given after NASCAR officials found the lug nuts were improperly secured at the end of the 400-lap event at the Monster Mile.

Byron was the tail-end of the history-making 1-2-3-4 finish for Hendrick Motorsports on Sunday.

Yawn.
Nothing to see here. Move along.

These “penalties” are as effective as starting at the rear of the field for “inspection” violations. They’ve really stopped the untightened lug nuts and inspection problems,usually involving the same teams. Imagine if the 48 had loose lug nuts after the pit stop that got them the lead. If the lug nuts had been tightened they might not have been first car out. Starting last doesn’t seem to matter for some teams in an example of Brian’s product.

I guess my point was that these lug nut penalties aren’t even worth reporting. Especially if there is only 1 loose lug nut and it’s just a fine. It’s basically a parking ticket. I get that it’s a weekly closure of the previous race but, when there aren’t any real penalties, it’s kind of a waste to even read about it.
Perhaps the weekly penalty report would be more worth reading if they also included a summary of those teams that had to start at the rear and what they did specifically to fail inspection.

Glad to know that I wasn’t the only one who yawned reading this article. Talk about click bait!