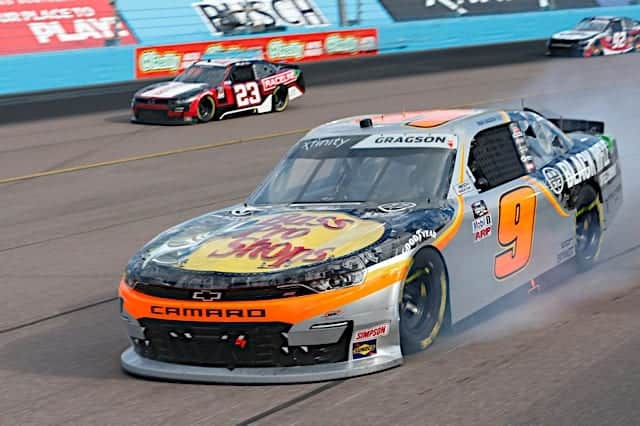 There’s no question that when the gates open on race weekend, it’s NASCAR’s show.

There is no disputing that. You can go back to countless stories, going back to Big Bill France strong-arming his influence against drivers thinking of starting a driver’s union, to Bill France Jr. and his lieutenants finding multiple ways to say that, “you need NASCAR more than NASCAR needs you,” to Mike Helton reminding drivers as high placed as Dale Earnhardt Jr. who was really in charge of the NASCAR garage.

Here’s a hint – it’s not the drivers.

This brings us to what happened on Wednesday.

That’s when it was announced that following an appeal, the penalty levied against NASCAR Xfinity Series driver Noah Gragson and his No. 9 team after Darlington was overturned.

It’s obviously good news for Gragson, who has had a tumultuous season in which he’s had strong finishes, but come up short of race victories while also attracting attention with various post-race comments and altercations, as well.

Being able to now keep his fourth-place finish puts him at a less precarious position in the points standings. Plus, he does not have to forfeit the $100,000 Dash 4 Cash prize. In truth, the latter probably means more to JR Motorsports as it won’t have to carry the black mark of being branded as cheaters for having to surrender a top-five finish. It’s also a nice feather in the cap for Gragson, who won’t have the cloud of having to surrender a top-five finish hanging over his head this weekend at Dover.

I told our group to accept it and move on to the next race but CC Dave felt confident in winning an appeal. Glad he didn’t listen to me initially. ??

If the story ended there, it’d be a nice feel-good story.  In truth, it is anything but that.

Usually, when a penalty is overturned, it’s usually known why. Was the part in question within the rulebook? Was part of post-race inspection was botched? Was a measurement incorrect? Was it deemed the post-race failures were non-intentional?

NASCAR announcement provided absolutely none of that.

Here’s the depth of info that NASCAR was forthcoming about in regards to overturning the penalty to JR Motorsports:

“Appellants did not violate the Rule(s) set forth in the Penalty Notice.”

Yes, that’s right. NASCAR used a matter of 12 words to explain why Kaulig Racing no longer has $100,000 worth in its bank account as a result of Gragson’s fourth-place finish being disallowed. More importantly, it also explains absolutely nothing about why it made a decision that could decide who makes the playoffs in the Xfinity Series. Remember – before the penalty was rescinded, Gragson was 11th in points, below the cutoff to make the playoffs.

In recent years, the appeal process has included penalties upheld against the No. 42 team at Chip Ganassi Racing, the No. 51 of Jeremy Clements in the Xfinity Series last summer as well as Mike Wallace’s violation of the behavior policy also being upheld.  The fact that this week’s decision is a departure of sorts from the norm further underscores why there should be more transparency about why the penalty against Gragson was overturned.

It’s only May, but those points could mean a lot for Gragson in making the postseason…or a guy like Clements who is making himself out to be a factor to possibly make the playoffs at this time.

It’s easy to say, “Oh, it’s early. There’s plenty of time to make it up.” But every point matters over the course of a season – ask any fan of Mark Martin when discussing the 1990 season.

To be clear, this is not about Gragson or JR Motorsports. It’s about NASCAR’s appeal process.

NASCAR’s appeal process directly impacted the race for a playoff spot in the middle of the week. It owes its fans, drivers, and competitors a bit more than a milquetoast 12-word state.

Here’s what to watch for this weekend…

Justin Allgaier is one of two drivers, along with Austin Cindric, to win twice this season. Could he make it number three at Dover? The stats say that’s a strong choice given his two wins there, including one last season.

Could the family-owned operation with Clements behind the wheel make the playoffs? He is off to a good start, currently 10th in the standings. The next four to five weeks, however, will tell us a lot in terms of how sturdy those hopes are.

Cindric could be due to win again

Speaking of multi-race winners, it’d be hard to not have Cindric pegged to contend for win number three of the season at Dover. His 5.8 average finish leads all drivers and his 79 laps led leads all current full-time drivers in the series other than Allgaier, who has made 14 more starts at Dover than Cindric.

Wait – are you trying to tell me NASCAR has no credibility? The next thing you’ll tell me is I can’t trust the government. Consider me shocked.

We will not throw a caution for 13 laps and we won’t tell you why because we don’t have to. This is reality tv after all.