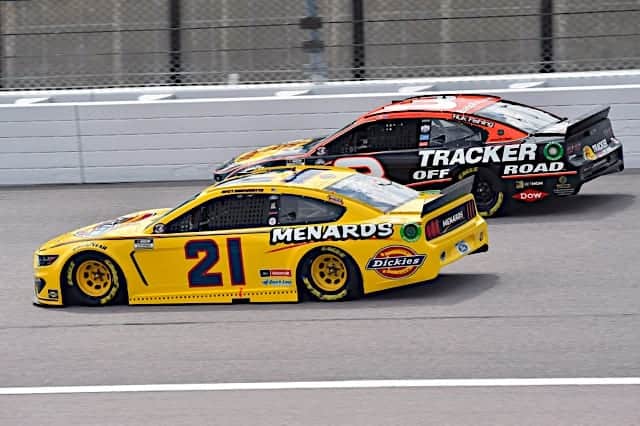 We’ll get our first “official” look at the Next Gen car this Wednesday as all three OEMs, Chevrolet, Ford and Toyota, reveal their own unique looks for the 2022 Cup season. The Gen-7 car project, delayed by a year due to the COVID-19 pandemic, is designed primarily to lower costs for teams and to improve driver safety, but an ancillary goal is to attract new manufacturers to the Cup Series with a reduced financial barrier to entry.

“In my opinion, the importance of this car can’t be overstated. There are many things that Next Gen will do for us as a sport when it rolls out in 2022,” said NASCAR President Steve Phelps. “The styling is going to be amazing. I think the racing is going to be better based on the aerodynamics of the vehicle.”

Alongside the body changes, the four-speed manual gearbox will be replaced with a six-speed sequential-shift transmission; the car will also feature independent rear suspension — a NASCAR first. The wheels will increase from 15 inches to 18 inches in size but the massive adjustment will be a single center-locking nut replacing the five lug nuts on the current set up — a game changer for pit stops and a whole new definition to missing lug nut.

Clearly there’s some pressure on the Next Gen car to deliver transformative results on and off the racing surface, and you can’t help but feel the additional forced time thanks to the pandemic will lead to positive benefits. As ever, the proof is in the pudding. How the Next Gen car races on track and how much it opens up the sport from a competition perspective will define the relative success of the initiative. I’m looking forward to watching this all play out in 2022 and beyond.

A couple months ago, after the third race of the season at Homestead-Miami Raceway, I wrote, poking fun a little, about how Matt DiBenedetto still had fewer points than Jamie McMurray, who had only raced in the season opening Daytona 500. Without a confirmed seat for 2022, Austin Cindric will step into the famous Wood Brothers 21 car, so it was imperative that Matty D. got off to a solid start.

But 33rd in the Daytona 500, 37th on the Daytona Road Course and 28th in Miami was not the start the doctor ordered. It looked fairly grim, but in the past eight races DiBenedetto has really turned it around and at the time of writing now sits just inside the playoff cut off.

Sunday’s fourth-place finish at Kansas Speedway was his high-water mark for the season, coming a week after a fifth-place run at Talladega Superspeedway and a ninth-place effort at Richmond Raceway two weeks prior. Of course, still elusive is that much needed first Cup victory and the Wood Brothers 100th team victory. Once again, he was close at Talladega but he’s still zero for 224. Michael McDowell’s win broke a long winless streak in the Daytona 500. Here’s hoping Matty D. can make it two for two in this category in 2021 for what would truly be a celebration that just about everyone would get behind.

3. The Lady in Black

Next up, we head to the iconic Darlington Raceway for both Mother’s Day and Throwback Weekend, for me now one of the best traditions on the NASCAR schedule. Three throwback schemes I especially like this go around are Chase Elliott’s Alan Kulwicki Tribute:

This throwback scheme is awesome ?

And William Byron’s Valvoline Neil Bonnett throwback,  but there are plenty of other fine examples.

This will be Cup race number 120 at Darlington, a remarkable streak that extends back to 1950. One of the few positive aspects of the pandemic was that we got to race at Darlington three times last year. Kevin Harvick won two, including the Southern 500, with Denny Hamlin picking up the other victory giving both drivers three career wins at the famous old circuit.

Brad Keselowski, Erik Jones, Kyle Busch and Martin Truex Jr. each have a win apiece at the Lady in Black. For the third straight year, the Labor Day weekend Southern 500 will also double as the playoff opener, so this weekend’s race carries even more significance for the teams looking to contend. As ever, we hope for great racing at the track appropriately nicknamed “too tough to tame.”

Lewis Hamilton cruised to his second win in three Formula One races in 2021, and a remarkable 97th overall victory with a strong performance in tricky conditions at the Autodromo Internacional do Algarve in Portimao, Portugal. Given the speed Red Bull has shown so far this year, it’s hard to overestimate the significance of a two-win start.

Already, the difference between Hamilton and Max Verstappen, the two main protagonists for this season’s crown, is eight points and in a season where small margins are likely to make outsize differences, it’s absolutely Advantage Hamilton headed into Round Four in Barcelona.

Spare a thought, too, for Valtteri Bottas, who really needed a good race to kick start his sputtering season. The Finn looked strong in practice and did enough to take the P1 in an awkward Q3, the final session of qualifying, denying Hamilton a milestone 100th pole position. Bottas held his lead off the line, but within 12 laps, Hamilton had tracked down and passed his fellow Mercedes wheelman with relative ease, and as is often the case, once Hamilton assumes a lead, that was all she wrote.

One thing is for sure, though: There’s a whole bunch of twists and turns left in this particular F1 season, and it’s fun to watch arguably the greatest F1 driver ever respond to more pressure than he’s faced in the last couple years.

And finally, a shoutout to my favorite NASCAR podcast, Positive Regression, which reached a 100th-episode milestone this past week. The pod is hosted by Alan Cavanna and David Smith and focuses on the analytics side of motorsport. I finish every episode feeling not just more informed but smarter about the nuances and the specifics of the sport.

There’s so much NASCAR content out there and only a relatively small percentage of that is worth consuming. If you’ve not tried it before, I humbly suggest you give it a go.

As a grumpy old man, I loathe the move to the single hub and the change in transmission. That said, I’m going to keep an open mind and enjoy this car, considering it will be the last with an actual engine in it. Once they go full golf cart, I’ll also likely retire from the sport and spend weekends tinkering on my Hellcat.

I like the single lug nut idea and bigger tires. How about losing the front splitter altogether with the bottom side skirts. Also make the grill opening bigger and where it should be.