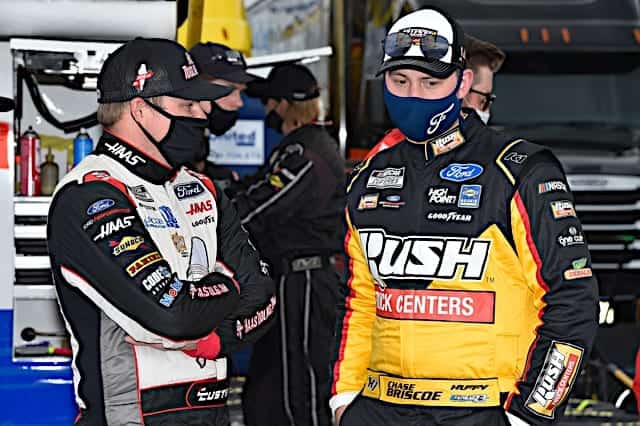 Where does Brad Keselowski line up in the pantheon of superspeedway racers all-time? – Uriah O., Rochester Hills, Michigan

He’s on the Mount Rushmore for me, that’s for sure.

I never was able to see Dale Earnhardt Sr. work his Talladega Superspeedway and Daytona International Speedway magic (10 and three wins, respectively), but I’ve seen highlights, and I don’t need to see more. Add his son Dale Earnhardt Jr. to the list (six at Talladega, four at Daytona), and I would put Denny Hamlin (two at Talladega, three at Daytona) on the list as well. Recency bias aside, Hamlin is one of the best there is all-time on those tracks.

Keselowski is the last one I’d put on that list, boasting six wins at Talladega and one (including multiple, painstakingly close finishes in the Daytona 500) at Daytona. He’s the winningest superspeedway driver currently (7) and has a knack for getting up front, staying there and maneuvering his way through traffic.

And now he’s tied with two NASCAR Hall of Famers in Earnhardt Jr. and Jeff Gordon with six ‘Dega victories.

“It’s more than I ever dreamed, I can tell you that,” Keselowski said post-race. “I would pause and say Dale’s record is so far out there, yeah, I have a shot at it, but it’s a distant shot. I think you got to get seven before you can even think about 10. Still pretty cool to be on the same list with him on anything, that’s for sure, even if it’s second.”

And he’s far from done. Keselowski is 37 years old, two years away from his statistical prime, according to Motorsports Analytics, and has four superspeedway races per year from here on out to capitalize on. Odds are that Team Penske continues to be quick (as does Ford) and Keselowski isn’t done winning on these tracks.

Gone are the days and/or notions of superspeedway races being “a crapshoot” or “mostly luck.” It’s about skill and positioning yourself in the right place at the right time to capitalize. Keselowski is one of the best all-time in doing so and should be respected for it.

This weekend will be the first 1.5-mile race since Atlanta over a month ago. How important is it for Stewart-Haas Racing to show signs of improvement at Kansas? – Clarence M., Emporia, Kansas

See, this is a fascinating point. At first glance, I’d say very. But upon further review, maybe not to much.

So, in short, I don’t actually think it’s that important for them. Sure, they’d like to run well to show that where the bread is buttered in NASCAR Cup Series racing, on intermediate tracks, is a strength for the organization, but gaining those 70 pounds of downforce lost (as Rodney Childers mentioned) isn’t going to happen overnight.

They can focus their efforts equally across the board: some on intermediates, some on road courses, some on in-betweeners. Not so much on short tracks, as only three more remain (booooooooooo, by the way) or superspeedways, as only one is left in the regular season.

See also
Fire on Fridays: It's Time for Another '1st Time in 51 Years'

I don’t think there’s any need for more widespread panic at SHR if they run how we expect them to this Sunday: average. Kevin Harvick will somehow score a top 10 with a car that has 15th-place speed, Aric Almirola may sneak into the top 10 or 15 as well and Cole Custer/Chase Briscoe will likely finish in the mid-20s, off the lead lap.

It’s a predictable existence that SHR is living right now, and also in the cycle of the Cup Series. Nine wins one year, scraping the bottom of the barrel with 0 playoff points across four cars less than 10 races into the season the next.

This year isn’t going to be Stewart-Haas’ to lose, like it seemed to be last year. It’s going to be dominated by Hendrick Motorsports, Joe Gibbs Racing and Penske, as it has been to this point. Playoff spots are still available and will be filled up by at least one SHR car (you’d assume), but anything other than that, right now, will be a bonus.

It’s the harsh reality of where the organization is right now. The cycle comes and goes but waits for nobody.

This week on TikTok

They will run as good or as poor as nascar wants them to run . Them and them only control teams , manufacturers and sponsors.