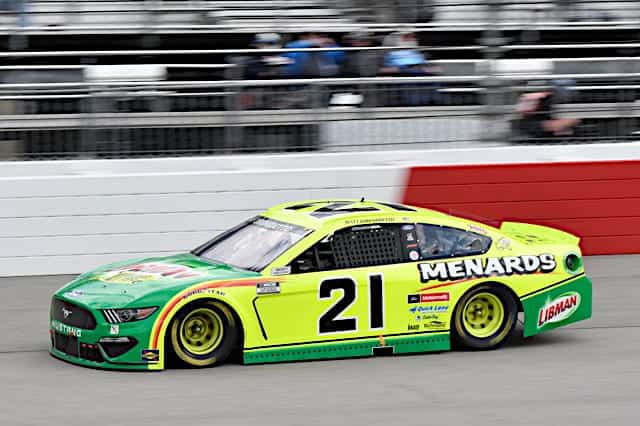 Matt DiBenedetto found himself up the creek without a paddle to start 2021.

His luck to start the year was atrocious with seemingly no end in sight. Three races in, he was mired way back in 35th in points, trailing drivers like Jamie McMurray who ran a one-race deal in February’s Daytona 500.

It took a nine races into the year for the No. 21 team to close out a race the way they wanted. But DiBenedetto finally notched his first top 10 of 2021 with a ninth-place result in the Toyota Owners 400 at Richmond Raceway on Sunday (April 18).

“Feel like it was long overdue, but we got into the top 10 finally, so that’s good,” DiBenedetto said in a Team Penske post-race Zoom. “We’ve had some rough circumstances that put us into a hole at the start of the year, but we knew that we had plenty of speed and obviously, a great team. It was good to come here and at a track, too, that I really wouldn’t consider one that I’ve had a ton of success at in the past, so that was definitely rewarding.”

The race was perhaps the smoothest yet for the No. 21 Wood Brothers team. After starting 16th, DiBenedetto steadily crept inside the top 10 and found himself sticking there for much of the event.

It’s impressive considering DiBenedetto called Sunday “a day full of no forgiveness,” with perfection a necessity at every corner since Richmond produces few cautions for incidents. Yet this year’s iteration featured a late-race yellow with 20 laps to go when Kevin Harvick crashed with a flat right-rear tire.

Just moments before the caution flag flew, DiBenedetto was lapped by leaders Joey Logano and Denny Hamlin while running ninth, but Kyle Busch followed Hamlin through to take away ninth from DiBenedetto. That took the No. 21 Ford out of the free pass position, so DiBenedetto was forced to take the wave around to get back onto the lead lap but without fresh tires.

“Right when that caution came out when the 18 had just passed us, my quote was, ‘perfect timing,'” DiBenedetto said with a laugh. “Some things just don’t work out exactly right. But I can’t complain because we had everything go smooth the rest of the day before that.”

DiBenedetto said the situation was “nerve-wracking,” but knew he was in good shape to come away with a good finish nonetheless.

“I knew we had about a six-car buffer to the next guy we were racing, which was the [No.] 3 [of Austin Dillon],” he recalled. “That was good to know that we all we had to do is just restart, be smooth, don’t get in any incidents, and as long as it got sorted out, I knew we’d be fine. So it worked out.”

The dreadful start to the year had Wood Brothers Racing searching for answers team members knew they couldn’t find. The season began with three races in Florida, and none of them went well. A crash in the Daytona 500 left him 33rd, followed by 37th at the Daytona International Speedway road course and 28th at Homestead-Miami Speedway.

“We started the year and it was really nothing of our doing. We couldn’t even look at it and say [the issues] were self-inflicted,” DiBenedetto said. “It was just bad circumstances, stuff that was out of our control.”

The 29-year-old realized, though, he wasn’t the only one with fast cars but nothing to show for it. Aric Almirola at Stewart-Haas Racing was in much the same boat, if not worse.

“It just goes to show, between him and I and the rough starts to the season that sometimes, things have to go your way,” DiBenedetto said. “And as easily as that momentum can be pretty bad, it can flip around and be [better].”

Finally, the No. 21 team is finding its footing. With a ninth-place effort at Richmond, DiBenedetto has quietly strung together six consecutive top-16 finishes since that dismal start in Florida. And since sitting 35th in points after Homestead, that silent consistency has rocketed the No. 21 team up to 18th, just outside the 16-driver playoff grid.

“We haven’t even really had smooth races until [Sunday], but we’ve still been climbing up in the points,” said DiBenedetto, who is in his second year with the Wood Brothers. “It just shows the strength of our team and it’s rewarding to finally get that top 10, be climbing up there and the points digging out of that hole and doing what I’ve known all along that we’re more than capable of as a team.”

“I’m glad we’re finally getting on track and the runs that we deserve.”

Two months into the season, plenty of time remains to sort out the playoff picture. However, Alex Bowman‘s victory added an eighth different race winner in just nine races, meaning spots for the postseason are already slipping away – even without heavy hitters like defending champion Chase Elliott, Hamlin, Harvick or Kyle Busch claiming wins yet.

“It makes it extra challenging,” DiBenedetto said of all the different victors. “But I know that we can keep on hitting our stride, running consistent. Consistency is everything. So if we can do that, I have confidence that we can climb up there in the points where we belong, because we’re just getting going.”

If they want to make the playoffs, the margin for error is nearing nonexistence for the Wood Brothers, hampered by their horrendous start. Both driver and team know that and are focused on maintaining momentum over the next month, starting next weekend at Talladega Superspeedway.

“Although we’ve been finishing up in the top 15 and having great runs, we still haven’t had the greatest of circumstances,” DiBenedetto said. “I know that we’re getting on track, building up points and that we can climb up there where we belong, but it’s going to be a very crucial next month, all these races from here until the playoffs.

“We don’t have really any margin for error at all. Hopefully, a win would be the best case scenario, but we’ve got to just focus on consistency.”

The NASCAR Cup Series hits the track at Talladega on Sunday, April 25 at 2 p.m.

Matt D has disappointed but wait till the Cindric kid arrives. Watch Roger start to throw $$ at this team.