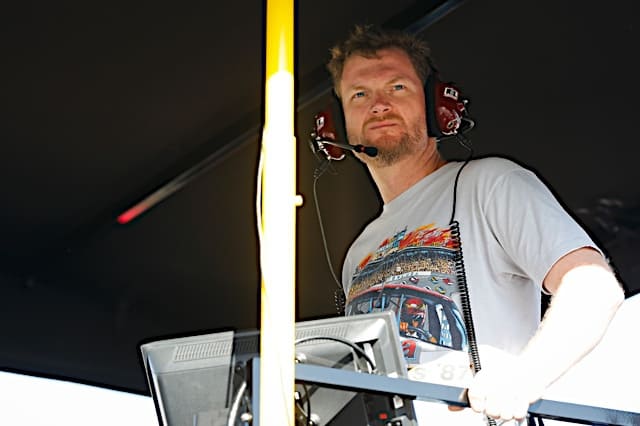 Did You Notice? … Dale Earnhardt Jr. casually mentioned he and sister Kelley have had conversations about moving JR Motorsports to the NASCAR Cup Series? Earnhardt spoke after Josh Berry’s NASCAR Xfinity Series win Sunday (April 11) and said it would be “irresponsible” not to consider a climb up the ladder with the introduction of the sport’s NextGen car in 2022.

“I think you have to ask yourself, ‘Is this a moment we need to consider — if we would ever get into Cup — is this the time to look at what we’re doing and see if that makes sense,'” Earnhardt described, as reported by Lee Spencer of Racin Boys. “The new car forced us to sit down and have a conversation about whether we were missing an opportunity to go to the Cup Series in the future.”

Earnhardt would be the second NXS team taking a look at moving up; Kaulig Racing has also made clear their intention to make the jump. They join an increasing number of interested parties poking around. Floyd Mayweather has been looking at investing in a NASCAR team for over a year. New Orleans Saints running back Alvin Kamara sponsored JD Motorsports back in February. LeBron James is now a partial owner of the group invested in Roush Fenway Racing. A source tells me a new ownership group from Kansas City was a finalist to buy a charter last year.

And we haven’t even mentioned potential new money from more manufacturers. The sport hopes they utilize the NextGen chassis as an opportunity to jump in.

It’s the demand NASCAR Cup owners need to increase the value of their charters. Those 36 locked-in spots on the grid have had limited value since their introduction in 2016. At the end of 2018, Furniture Row Racing reportedly sold their championship-winning spot on the grid for just $6 million, far below the $1.2 billon+ market value of stick-and-ball sports teams (see Marlins, Miami). Backend NASCAR teams can only hope to be that woeful MLB franchise; a low-end charter that year from BK Racing sold for just $2.08 million.

A closer look at Earnhardt’s comments show these franchise values may have indeed gone up.

“The charter makes it a big challenge for us,” he explained. “That’s a huge financial challenge for anybody trying to get involved in the Cup Series.”

It’s what the sport has been looking for, right? Well, yes and no. Rising cost of entry is a problem for NASCAR as they consider their next stage of growth. After welcoming new faces like Michael Jordan and Pitbull in 2021, potential options on the grid are shrinking. Will there be top-tier teams out there willing to give up spots? Without that, it’s unlikely the balance of power ever shifts.

There’s power and cohesion at the top, making it difficult for new ownership to break through. Both Trackhouse Racing (Daniel Suarez) and 23XI Racing (Bubba Wallace) have had respectable starts but currently sit outside the 16-driver NASCAR playoffs. In fact, if the postseason started today, only three organizations (Penske, Hendrick, Gibbs) take up 10 of the first 11 spots.

It makes it a tougher sell for these teams like JR Motorsports, Kaulig and others to step up. How do they break through the monopoly at the top with these four-car super franchises? FRR did it, winning the championship in 2017 with Martin Truex Jr. but they were also heavily aligned with JGR.

This gluttony at the top leaves a limited group of charters potentially available. Here’s a look at the other 14 guaranteed spots beyond the ones we’ve listed thus far (which will almost certainly be maintained for 2022).

From that list, you can cross off several more teams. Spire has maintained throughout their existence they’ve acquired charters to go full force with the NextGen car in 2022. (They actually have a third that’s been leased to Trackhouse). Front Row Motorsports won the Daytona 500 this year with Michael McDowell; it seems unlikely they’d want to scale back next season. JTG Daugherty Racing is still a two-car team, around for over a decade with former NBA star Brad Daugherty as co-owner. There’s solid sponsorship for one of those cars, the chartered one, and no push to exit the sport anytime soon.

Live Fast Motorsports is in their first year running Cup, a new venture co-owned by Matt Tifft and BJ McLeod unlikely to dissolve. Richard Petty Motorsports maintains a spot on the grid with the sport’s “King” as its centerpiece. It’s clear NASCAR would not let that team dissolve without a fight.

That leaves two backmarker franchises, Rick Ware Racing and StarCom Racing, potentially in position to sell charters at the end of the year for decent money. But even in that best-case scenario, will JRM suddenly leapfrog straight into playoff contention? The NextGen car may clear out all the notebooks, but four times the resources means the cream still rises to the top, no matter the car or format.

“The money that you’re going to need that’s required to race there and be competitive more than doubles,” Earnhardt said of the Cup Series. “We don’t have a partner right now who is willing to make a commitment like that.”

It’s an issue that makes the jump cost prohibitive unless you have someone with deep pockets (like Jordan) willing to spend. Is it really worth it for JR Motorsports to jump up a level, run 25th and stall out behind the heavyweights? Right now, this team is a heavyweight down in Xfinity, competing for championships on a yearly basis. It gives Earnhardt the ability to let guys like Berry go from short track star to achieving his dream on a fairly large stage.

Been a long time since I cried so hard. ???
It’s great to see my friend @joshberry live his dream.
Great job @taylorcmoyer and the boys for putting him in position.@MartinsvilleSwy is a special place.??@JRMotorsports is on a roll. ??

Can you really see that emotion translate into a single-car upset win in the Cup Series? Feels like a tall order the way things are currently constructed.

Maybe the NextGen car will change that. Maybe more spots in the field would help even out the franchises (Cup ran with 43 cars from 1997-2015). Perhaps over time NASCAR can put the squeeze on and reduce the number of charters to three cars per owner to accommodate demand.

But right now, it feels like Hendrick, Penske, Gibbs and SHR have enough of a foothold on top to make Earnhardt’s best option to keep mentoring and developing talent down in NXS. It’s a role he relishes, from molding bad boys like Noah Gragson to undiscovered gems like Berry. So why complicate it?

I can’t see NA$CAR giving Jr. a charter. After all, what’s he ever done for them?

Very funny!
My type of humor.

Who said it should be easy to get into the top tier of any sport?
I believe in the law of supply and demand. Anyone can get a charter, just offer enough money. I’d bet someone would consider selling their charter for 20 million dollars. If not offer 30 million. Still no, how about 40 million. Can you see a pattern developing?

NASCAR will make sure of that one way or another.

he’s get charter cause of his last name.

however, he is going to have to realize he will not be a top tier team. sure he’ll be an auxiliary team to hendrick, but those hendrick teams are the top dogs. this venture will not be like when is father’s race cup teams under the banner of dei. i do not think success will be instant.

nascar just want earnhardt name back in cup, since he’s not driving ownership will fit their needs.

Jr will get one because he will work for it, as he does to preserve the heritage and history of the sport. I’ve met him in person 4 times and each time he remembered me. He didn’t match his Daddy’s stats nor won a championship but HE IS a champion of our sport. I posted a comment on his podcast listing about 20 different potential sponsors that would fund a change. Plus, I am sure he could find an investor like Denny did in MJ. Wrangler, Budweiser, Hershey’s (as a competitor to MARS) Wal-Mart, Grainger, John Deere, Auto-Zone, Pepsi/Mountain Dew, Dollar General…all would make great partners. I think something must be in the works because Hendrick stopped using the 88 (and we all know his flagship is the 5 but the sudden change?) Jr could purchase a charter from Rick Ware Racing or maybe NASCAR will smarten up and increase the charters, which then he could get one.

Well said . The mention about the #88 is an excellent point .

The whole point of charters is to limit new cars coming into the sport thus reducing competition for the existing owners. NASCAR management should be smacked for agreeing to them. Limiting competition is going to be another nail in NASCAR’s coffin.

In theory, limiting the number of charters would mean that for an incoming owner to purchase an existing charter he has to up the ante.
If they choose to do the always except thing again, that has the reverse effect.
But the money guys will work it out, and the NFL draft is around the corner.
Cheers.

So this would be another well-funded team to push the real underdogs out? Since FS is so devoted to small teams struggling for existence, where is the outrage? JR will always get anything he wants, but is an 8-car HMS team really good for the sport?

It would give more seats to drivers trying to get to Cup. And do you really think NA$CAR would let Mr. H have 8 Cars? Rhetorical question. As a great actor once say, “HELL YEAH!!!!!!
The “rule” book is written in invisible ink. They would insist it is what the fans wanted.

Don’t we have enough rolling chicanes out there already? So much of Cup racing already looks like amateur hour or Friday night demo derby. It’s nearly always the backmarkers causing race-defining cautions.