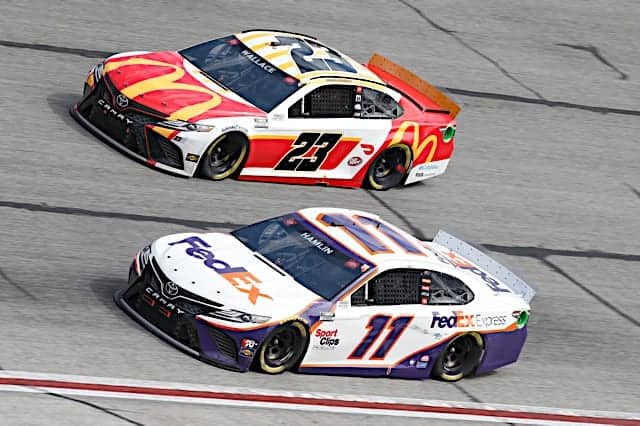 Can Denny Hamlin win it all this year?

It’s clear that Denny Hamlin is going to be the NASCAR Cup Series championship favorite for the rest of this season.

Although Hamlin has not been able to win so far this year, he has six top-five finishes in seven starts so far this year, with his lone finish out of the top five being an 11th at Homestead-Miami Speedway.  Hamlin has built up almost a full race points lead, which is an impressive feat with an egg in the wins column.

The key difference for Hamlin has been stage points; he has accumulated 36 more such points than the second most on the board, in addition to winning three stages.

The dangerous thing about this spring for Hamlin is that past the off-weekend is a murderer’s row of standout tracks for the Virginia native: Martinsville Speedway, Richmond Raceway, Talladega Superspeedway, Kansas Speedway and then ending that run of races with his best racetrack, Darlington Raceway. It would be surprising if Hamlin doesn’t have at least his first win and a triple-digit lead in points after that 12th race of the season.

The key concern for Hamlin is the concern that Hamlin has faced for over a decade now: his ability to close. Hamlin can win any race of the season, and even some of the biggest races of the year, but there are still some times where he overthinks a situation. Last Monday’s (March 29) race at Bristol Motor Speedway’s dirt track, where Hamlin chose to end his bid for the win by going up top to try to catch a nonexistent track cushion, is a prime example of that.

At the same time, however, it’s hard to have a better start to the season without winning than Hamlin has. His average finish of 4.7, if it were applied to a full 36-race season, would be the best mark in decades in that particular stat category. And more importantly, Hamlin’s strong start has put to bed any notion that Hamlin will begin to underperform in his day job as he also runs a separate Cup race team.

Is Kevin Harvick really that out to lunch to begin the year?

There has been a lot of talk about Kevin Harvick being a step off this year. And while it’s not completely unwarranted, it may not be the end of the world for the Stewart-Haas Racing driver.

Sure, Harvick has led just 17 laps this season, a mark that would fall short of any bookie in the country’s under for this point of the season. And his 24 stage points are a paltry sum, with both of these marks indicating that Harvick has lacked speed this year.

But there are signs that the doom and gloom may be short-lived. For Harvick, these first seven tracks has been a bit unfavorable. He struggled to do anything at the Daytona International Speedway road course but was still able to come away sixth at the checkered flag. Harvick struggled at Las Vegas Motor Speedway and Atlanta Motor Speedway, but even at Atlanta, he was still able to nab a top-10 finish. Finally, Harvick was open coming into this past weekend that he wasn’t going to put much stock into the dirt series event, and his finish of 15th kind of shows for it.

His average finish of 9.4 is lower than 2020’s 7.3, but that 7.3 mark is tied for the best in the last 21 years of Cup racing and 9.4 is still good enough to be tied for second in average finish among all drivers in the series. A lot of those tracks I listed above as strong suits for Hamlin should also be great racetracks for Harvick.

If the No. 4 team is still having a problem getting those stage points in a couple of months, it might be time to sound the alarm. But it’s not fair to say Harvick is out of the game yet when his numbers have still looked solid before hitting any of the tracks on which he can do really well.

Can Kyle Larson shake the rust off and start finishing more races?

While I figured Kyle Larson would end up contending for a championship this season, I wasn’t expecting the No. 5 Chevrolet to be quick every week.

Oddly, the only race where Larson never really seemed to have a chance at winning this year was the dirt track at Bristol, where he had to keep driving his way through the pack before wrecking out mid-race.

Otherwise, just about every winner this season has had to contend with Larson at some point in the race. Larson had a crushing loss to Ryan Blaney in Atlanta, but in that particular instance, my theory is that the finish to that race is just indicative of rust. Larson was out almost all of last year, and while he did do a lot of racing outside of NASCAR, he didn’t have to spend so much time saving his tires in that style of racing, something that already really wasn’t a strong part of his game in NASCAR.

But that rust is going to go away more and more with every race. With all due respect to Mark Martin and Kasey Kahne, it really feels like this year is the best chance for the Hendrick Motorsports No. 5 to win another championship since Terry Labonte was able to accomplish it in 1996. Larson is right up there in that Hamlin tier right now and actually has the exact opposite problem that Harvick has.

Will Kyle Busch turn it around after so much struggling?

Busch has begun this season inconsistent on the speed chart. And when the car does seem to have some, it’s often voided by mistakes or bad luck.

In the last 43 Cup races, or since the 2020 Daytona 500, Harvick has failed to complete just three laps; Hamlin, just 24 laps. Busch has been missing for over 300 laps in that timeframe, thanks to seven DNFs.

Busch’s problem is the lack of practice. He just has not been able to take what he learns in a simulated environment and transfer that to the real world as well as his contemporaries. And it’s not an issue with Toyota’s dedicated simulator, as Hamlin and Martin Truex Jr. have done just fine over this past year practicing almost exclusively on that.

Currently, Busch is 13th in point standings. If Busch continues to struggle this season, there’s a fair chance that Joe Gibbs Racing does make a change at the crew chief position once again. The reality of this situation is that Busch has been the face of both JGR and Toyota’s NASCAR operations for over a decade now. They cannot have their driver underperforming for multiple seasons like this, especially with the two-time champion turning 36 next month and that he should be in his prime as a driver.

” IF” he survives to the last race, he has a 1 in 4 chance of winning the winner take all race and championship. But he’s been known to choke. And no, he for sure isn’t the favorite now, not in this one race format.

Hapless Hamlin, the afraid of Lobster Boy, will never win a championship this or any other year as a driver or team owner… He has an arrogant attitude and would not make a good champ anyway… it was funny as all get out when his daughter pulled his plug on I racing and that kud in the pizza pajama commercial has a better chance of a championship 29 years fro now than Dippy Denny…