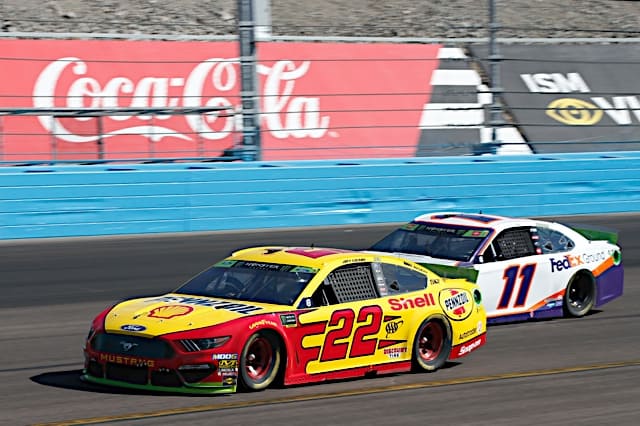 Did You Notice? … Joey Logano has a history of aggressive on-track behavior? That’s what Denny Hamlin thinks anyway, after being asked why he didn’t knock the No. 22 Ford out of the way in the closing laps of Monday’s (March 29) Food City Dirt Race.

“I think me and the No. 22 race differently,” Hamlin said when asked why he didn’t use force to take the win. “I don’t have that mentality.”

Hamlin’s swipe at Logano is nothing new; there’s been no love lost between these two drivers for nearly a decade. Their first run-in came back in 2013, during a final-lap race for the win at Auto Club Speedway and Logano’s first year with Team Penske. Coming off turns 3 and 4, Logano made contact with the No. 11 Toyota and sent Hamlin hard into the inside wall while Kyle Busch snuck by them both to take the win.

The force of that wreck caused a compression fracture in Hamlin’s lower back, an injury that kept him out of four races that year and permanently altered his opinion of Logano.

“If it wasn’t intentional,” he said later, “It’s the worst case of car control I’ve ever seen as a driver.”

Logano’s aggression wasn’t limited to just Hamlin, though. The most infamous incident came in the fall of 2015 when he spun Matt Kenseth late in the race to take the win at Kansas Speedway.

Kenseth was so angry after the crash, which kept him from advancing in the NASCAR playoffs, that he sought on-track retribution a month later at Martinsville Speedway. A payback wreck ensued that was one of the most blatant intentional moves in NASCAR’s modern era, causing a suspension for Kenseth but achieving its desired result: Logano was shut out of the Championship 4 in a year he won a career-best six races.

Since then, Logano’s most infamous move is also one that happened at Martinsville, indirectly responsible for his 2018 Cup Series championship. Running second to Martin Truex Jr., he executed the bump-and-run on the final lap Hamlin avoided in order to capture the victory and an automatic spot in the Championship 4.

“Miami,” he said afterward, referring to the playoff finale. “Just thinking about Miami. Thinking about how we can win a championship in this car. At the end of the race, you’re going to have some bumping and grinding at the end.”

There have been smaller incidents along the way these past several years: a spin-turned-fight with Kyle Busch at Las Vegas Motor Speedway (2017), a few issues with Kevin Harvick (2010, 2015) and even some tussles with current teammate Brad Keselowski (2020).

“Aggressive sometimes works for me,” Logano said. “I usually stay that way.”

The question is whether it’s fair to say his aggression is still as extreme as Hamlin makes you believe.

Flashback to Bristol, June 2020: the very track these drivers raced on this week. It was Logano on the wrong end of some bumper cars behavior as Chase Elliott made contact while battling for the win. (In that case, both drivers lost as Keselowski took advantage of the incident).

Logano did recover to make the postseason easily, then advance to the Championship 4 behind an impressive battle with Harvick at Kansas Speedway. On older tires, Logano was able to eke ahead of Harvick and stay there with the low-horsepower, high-downforce package that makes it impossible to pass. It’s the type of subtle aggression a driver of his caliber can utilize in several ways. He’s done it as a lapped car, preventing Kyle Busch from winning Bristol last fall or working as a pick to help teammate Ryan Blaney catch leader Kyle Larson at Atlanta Motor Speedway.

That said, 2021 hasn’t been filled with bulldozer-type moments. Instead, Logano was the one blowing chances over the first few races, letting a couple of wins slip away in the closing laps. He got wrecked by Keselowski through blocking in the last lap of the season-opening Daytona 500, then let Christopher Bell slip by without incident for a victory on the Daytona International Speedway road course one week later. At Phoenix Raceway two weeks ago, Truex snuck ahead on a restart and didn’t feel the wrath of Logano’s front bumper.

The No. 22 settled for second (or worse) each time. Would we have seen the same type of behavior a few years ago? At age 30, could Logano be maturing before our eyes?

One could say the same for Hamlin at age 40, too. It’s not like the No. 11 Toyota driver’s been devoid of aggression his entire career. There was the 2017 spin of Chase Elliott at Martinsville that kept Elliott from advancing to the Championship 4. Keselowski and even Danica Patrick have felt the force of Hamlin’s front bumper.

Frankly, you could say a “no contact” finish shows some progress in how both of them are racing. Trash talking aside, the two are giving each other more respect on the racetrack, a gentlemanly truce that appears poised to continue … regardless of what Hamlin might say.

The Gibbs Girls LOVE to keep the “Bad Joey” narrative going, no matter what! No matter what. Yawn, nothing new..move along. JDS. They never miss an opportunity, you can set your watch to it, saying something nasty, snarky and untruths. Mean Girls Club is still active.

Watching over the years, not a one of them bitchin’ is a Saint. Early years they all picked on Logano and bragged about it. For years he has been their equal or better and they are not getting any breaks from Logano. They have short memories. The kid who got bullied, has the bullies whining about him and his “aggressive” driving! He has fought back. Too rich, and funny. What a bunch of hypocrites. Have they watched themselves? LOL. And NASCAR and the media love to fuel this narrative. Yesterday nothing was done wrong, just racing.

Do you keep a shrine to Joey in your house? Asking for a fiend. LMAO!

Its a fact that the great drivers in nascar are mostly the aggressive ones its just a attitude a driver has. But joey doesn’t hide it i have seen many interviews where he admits it and actually says he is not out there to make friends the other drivers are his competitors. And he also knows his driving style keeps him in the seat of one of the most competitive teams in nascar and if he doesnt produce someone else will be driving that car. And yes im sticking up for my favorite driver bc he really doesnt care what people think he just tries to pass cars in front of him and stay in front of the ones behind him. I think he is a great driver that gets no respect but he dont care about that just keep winning and doing what you do.

The Logano vs. Hamlin feud has been going on much longer than a decade.

Back when Joey was running in the Nationwide Series, Cup interlopers like Denny Hamlin and Carl Edwards were regularly roughing him up. That’s where it started.

I respect Hamlin as a damn good driver, but he’s an asshole. So glad Joey is long gone from JGR.

How many championships has Denny won? Karma is a bitch.

Seems to me it’s only Denny or his crew chief doing the crying. Easy to see why. At short track Bristol, Denny’s crew chief all but told Denny to use the bumper. Remember who it is he told him. So Denny, not being as smart as Joey, tries to go to the top on the final restart, duh, guaranteeing Joey an easy win. It’s all Denny whining. Denny knows Joey won’t hesitate to pay him back. How the back feeling Denny !

As an HMS fan, I’m all for the Joey vs. Denny/Gibbs feud… Wreck away boys…

At California the last thing I see is Hamlin furiously trying to wreck Joey causing himself to lose control and crash hard in to the inside wall.
Regarding Stewart throwing fists at Joey because of the block on the restart, just remember what Stewart did to Regan Smith at Talladega to win the race.
Two of the biggest Hippocrates in NA$CAR, Tony Stewart and Denny Hamlin.

WJW Motorsports
Reply to  Tom B

He’s the one that drives like a little Bit**… Imma bust his @ss… all time classic.

kb
Reply to  Tom B

I get called all sorts of names for defending Logano in circumstances like Fontana and others that Joey was called the devil, when it was in fact HIS TORMENTORS that dug their own misery! ALA FONTANA! To name many!

I speak up because the majority of the narrative is so untrue. Which is par for the course in
todays sensationalist “reporting” rather than the facts. YOUTUBE IS MANY FOLKS FRIEND OF THE TRUTH, but they rather keep the “I hate so and so” narrative going to justify their obsession! And not believe their eyes.

HAMLIN was the architect of his own misery at Fontana, and he played the pity circuit, especially with that ahole hack Marty Smith. He did indeed dive down on Logano, but the Kings of Sensationalism want that conflict at every race, no matter if Logano passed by Hamlin or another Gibbs driver without saying hello and bringing them a tray of Dunkin at that track that day! Denny in this instance went on the high side and screwed himself for what might have been. The spin on this nothing burger is just disgusting.

Hilarious. Yeah Joey is an aggressive driver, but he doesn’t have a monopoly on it. There are a lot of guys that could throw stones but Hamlin isn’t one of them. likewise for Kyle Busch, Harvick or Keselowski. They’ve all crossed the line several times over the years. Hamlin is the new Stewart…. do as I say not as I do.

I hate both Logano and Hamlin. However, my list keeps growing. I just added Chase Elliott to my list of hated drivers since he is using that paint scheme honoring Alan Kulwicki. I hope he wrecks it on Lap One.

What could you possibly have against kulwicki?

I always found Kulwicki creepy, weird and kind of a general a-hole. Rumor has it that he lost Xerex sponsorship because of his behavior at a banquet. I also thought his “Polish Victory Lap” was playing into an ethnic stereotype.