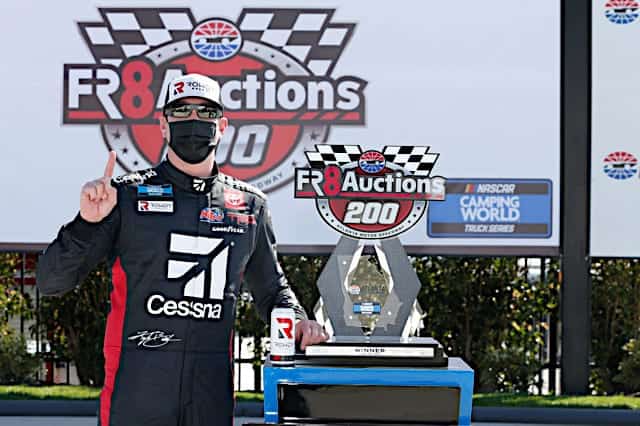 “It’s just a great opportunity to race in great stuff with KBM (Kyle Busch Motorsports), Cessna Beechcraft. This Toyota Tundra was awesome,” Busch said. “I can’t say enough about my guys, everybody at Kyle Busch Motorsports. They do such a great job with a lot of hard work. Without their preparation and dedication, we wouldn’t be as successful as we’ve been as an organization.

While Busch clearly had the dominant truck, John Hunter Nemechek started out looking like he might repeat his Las Vegas win. He took the stage one and two wins but when stage three went green to the checkered flag, the driver of the No. 4 Toyota lost some time to Busch during green flag pit stops. He went on to finish third.

“I felt like we were strong in stage one and stage two. I felt like we could hang with Kyle (Busch), and then we got around in him in lap traffic at the end of the stages,” Nemechek explained. “Solid points day overall for our Mobil 1 Toyota Tundra. I can’t thank everyone at KBM (Kyle Busch Motorsports) enough and all of our partners for supporting this deal. Overall, I’m happy with the day, but I’m disappointed.

“I was hoping to beat Kyle today, but I didn’t have anything for him there at the end. I’ve got to go study some green flag pit stop stuff and get better there. It’s always a work in progress. We will be back next week at Bristol dirt and hopefully go get us a win there.”

Along with the Overton’s wrap on his No. 3 Chevrolet, Anderson utilized his truck to recognize Women’s History Month. Anderson used the space on his truck to write the names of women and women-owned businesses that were nominated on Twitter to “honor and celebrate.”

Celebrating #WomensHistoryMonth in style. @j66anderson is carrying the names of inspiring women on his Camping World truck at @amsupdates. pic.twitter.com/bDdgPBnTXT

Typically, a ninth-place finish isn’t something to be celebrated, but for Moffitt and the No. 45 team, it should be. When the truck was started to ensure it was race ready, it suffered an engine failure, forcing the crew to change the motor within about an hour prior to the race. Moffitt was forced to drop to the rear of the field for the start. He was inside the top 10 by the end of stage two and remained there when the checkered flag flew. The ninth-place finish marks Moffitt’s first top 10 of the year.

After a fourth-place finish last weekend at Las Vegas Motor Speedway, Stewart Friesen had plenty of speed and ran inside the top 10 for much of the first half of the race, finishing fourth and third in the first two stages. But an uncontrolled tire penalty under the stage two break dropped him to the rear of the field where he was forced to race his way to the front. He ultimately ended up 10th, a result that’s hardly indicative of the speed he had.

A bunch of speed today, but a pit road penalty cost us a shot at a top 3. Win as a team lose as a team. All good. Glad we have these HFR Halmar @ToyotaRacing Tundras going in the right direction. JZ @JZ_FriesenOneZ is on the wheel today too @ShortTrackSS and in the redraw! ✌️

Though he didn’t get the victory he’d hoped to grab after losing a dominant Atlanta showing last year on a late-race restart, Austin Hill finished second, marking back-to-back top-five finishes. After results of 22nd and 33rd at Daytona International Speedway and the Daytona road course, respectively, Hill has posted finishes of third and second, propelling him from 23rd to sixth in the point standings.

Although it wasn't a win, @_AustinHill has a lot to be proud of after a P2 finish Saturday. pic.twitter.com/uAouLZjTaK

Nearly 14 years after his most recent Truck Series start, Bill Lester quietly made his return at Atlanta. Piloting the No. 17 David Gilliland Racing Ford, he started 31st and remained toward the back of the pack throughout the race, likely a product of zero track time prior to the green flag. By the time the checkered flag flew, Lester was 36th, seven laps behind the leaders. Interestingly enough, his return to racing came 15 years to the date since after his NASCAR Cup Series debut, which also came at Atlanta.

The Truck is ready to go and so am I! #WinningInReverse #NASCAR pic.twitter.com/zo7PU0gGKl

Rookie Kris Wright was forced to sit out of Atlanta after a positive COVID-19 test. In his place, Josh Berry piloted the No. 02 Young’s Motorsports Chevrolet to a 22nd-place finish after starting at the rear of the field due to the driver change.

I would like thank @TylerYoung02 & @youngsmotorsports for letting me wheel their truck. Ended up p22 basically with hardly any yellows. Helped me a ton and I am really thankful for that.

P3 on the day. Fast truck, just not enough. Proud of everyone @KBMteam! Thank you @ToyotaRacing and @Mobil1 #teamtoyota #here4wins pic.twitter.com/085F5epFFB

Hard fought day to say the least wish we got to start the race how we ended thought my @GMSRacingLLC team did a awesome job with adjustments all day. Just happy we are finally getting some momentum rolling. P6 today @amsupdates

Worked hard all day and @ThorSportRacing guys made good adjustments, just never had what we were looking for in our Tundra. P11. We will be ready to sling some dirt next week! Thanks @ChampionPowerEQ @CampingWorld @CurbRecords @ToyotaRacing @BlasterProducts pic.twitter.com/1thpFyX9Xo

Unfortunately we fought loose 2/3 of the race, resulting in a P14 finish.

A big thank you, to @marcuslemonis and @Overtons for allowing us to be here! pic.twitter.com/2HXZu0PoIQ

Speeding road penalty cost is today, cost us a good finish. I own that one. Pit crew guys killed it on pit road ?? were gearing up to get dirty next week @BMSupdates

Tough day! Gambled in the last stage on strategy hoping for a caution that never fell to give us some good track position on fresh tires. Proud of my @GMSRacingLLC guys effort all day today!

Up Next: The Truck Series heads to Bristol Motor Speedway for the Pinty’s Dirt Truck Race next Saturday night. A pair of practice sessions on Friday (March 26) will run ahead of four qualifying races Saturday (March 27) afternoon. The race itself will run at 8 p.m. ET on FOX Sports 1.

JHN should be happy that Kyle pulled over twice for the stage wins.

Tom B
Reply to  Shayne Flaherty

What are teammates for, especially when he is the truck owner?
Is it Kyle’s talent or the race truck? Remember Greg Biffle had the same results and he was retired for several years.