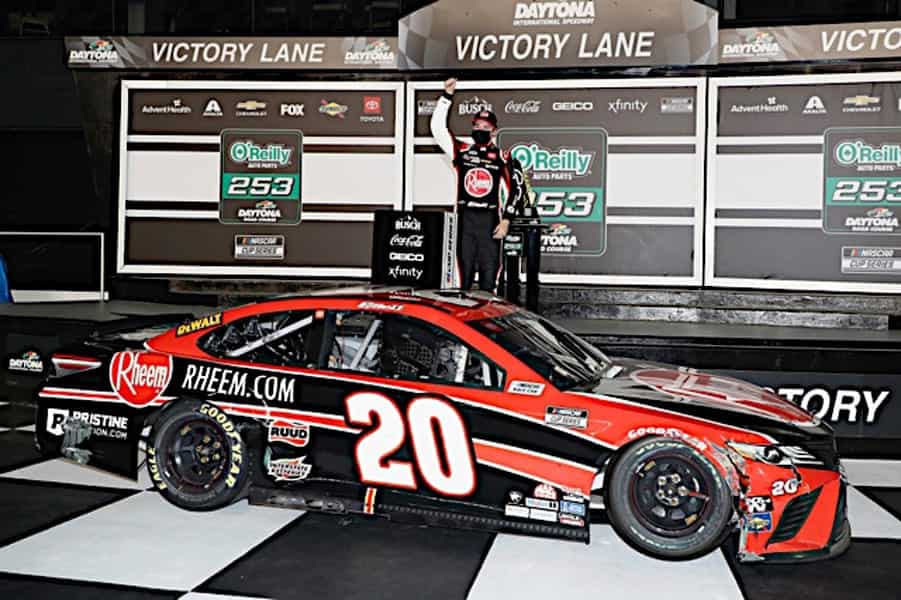 The 2021 NASCAR Cup season has provided everyone with intriguing storylines and has made some in the industry wonder if that is going to be the case all season.

This season was a brand new kind of season for NASCAR, as a new schedule that features a dirt race, seven road-course races and some additional curveballs. Through four races, NASCAR has seen four different winners, three of which did not win a race at all in 2020. With so much change in store for 2021, it’s led many to believe that NASCAR’s modern-day record of 19 different race winners in a season, set back in 2001, will be in jeopardy.

It’s still early in the year but the curveballs that are in store with the schedule have led many to believe the record is in jeopardy. Others believe that that record is too hard to reach.

Joy Tomlinson and Clayton Caldwell debate whether or not this record is safe or if this record has a chance to fall.

Yes, The Record Will Fall

Yes, the record will be broken this year. There have already been four different winners so far: Michael McDowell, Christopher Bell, William Byron and Kyle Larson.

We’ve already come close to tying the record: in 2011 there were 18 different victors, while 2013 had 17 distinct winners. While the number of varying victors has lessened since NASCAR set the playoffs to its current format in 2014, none of the seasons were quite like 2020. There weren’t any practice or qualifying sessions after the first four races, except for the Coca-Cola 600 at Charlotte Motor Speedway, due to the COVID-19 outbreak. NASCAR is taking a similar approach this year, with practice and qualifying mostly at the newer tracks on the schedule.

With less practice and qualifying, will the cream rise to the top, or will other drivers find themselves in victory lane? I think the latter will come to pass. As I mentioned, there are several new tracks on the docket for Cup drivers, including the Bristol Motor Speedway dirt race later this month. Larson and Bell are among the ones likely to excel there, but there are others you should keep an eye on. Austin Dillon, Bubba Wallace and Chase Briscoe have all won at Eldora Speedway. Briscoe also competed in the Chili Bowl Nationals, as well as Chase Elliott, Ryan Newman, and Ricky Stenhouse Jr. There’s also other dirt racers such as Shane Golobic who look to spoil the party and eke out a win. I mean, who knows what could happen with 40 cars racing on the dirt at Bristol?

Then there’s Nashville Superspeedway, a place NASCAR hasn’t run at since 2011. While the Xfinity and Camping World Truck Series held races there, this will be the first time Cup will compete on the 1.33-mile track. Several drivers raced there previously, but it’s been 10 years. An Xfinity car runs quite a bit different than the current Cup car, so it will be interesting to see who will come out on top.

Lastly, there’s several new road courses scheduled, including Circuit of the Americas, Road America and the Indianapolis Motor Speedway road course. Briscoe and Ross Chastain could be ones to watch here as well as road course ace Elliott. And don’t forget about Kaulig Racing’s part-time effort with AJ Allmendinger; he ran up front and finished seventh at the Daytona International Speedway road course last month.

While there are many new courses this year, most of the schedule consists of tracks drivers competed on last season. The often hectic superspeedways like Daytona and Talladega Superspeedway can sometimes produce surprising winners, like what happened in the Daytona 500. Erik Jones, Dillon and Aric Almirola could all hoist the trophy at these tracks. Heck, even Justin Haley won in 2019 for Spire Motorsports thanks to lightning and rain ending the summer Daytona race early.

Then you have short tracks like Martinsville Speedway and Richmond Raceway, intermediate courses such as Atlanta Motor Speedway and Kansas Speedway, and the Tricky Triangle, Pocono Raceway. Dillon won at Texas Motor Speedway last season, while Cole Custer took Kentucky Speedway. Though Kentucky Speedway isn’t on the schedule this year, Custer could still pull off a victory at a different 1.5-mile track. Tyler Reddick also nearly won Texas last year and was surging through the field at Homestead-Miami Speedway a couple of weeks ago, finishing second to Byron. Even Chris Buescher led several laps at the Florida track before getting mired in traffic and ending in 19th. All these drivers are fully capable of pulling off an upset.

Plus, several drivers in top-tier rides are all chasing their first victory of the season. Joe Gibbs Racing’s Kyle Busch, Martin Truex Jr. and Denny Hamlin can win in many places, as well as Kevin Harvick, Alex Bowman, Elliott, Brad Keselowski and Joey Logano. I highly doubt Stewart-Haas Racing’s struggles will last long; after all, Harvick’s worst finish before Las Vegas was sixth. He’ll likely be a strong contender at Atlanta and Michigan International Speedway, as he won at both venues in 2020.

The theme this season should be any given Sunday (or race day), as 2021 has already shown a few surprises. COVID-19 regulations forced a schedule change already, and there could be others depending on what happens after the spring break. However, even if there are no more adjustments to the calendar, there should be a wide variety of winners, enough to break the single-season record. – Joy Tomlinson

Lots of Winners? Sure! But 20 is Not Realistic.

There’s no question. The 2021 season has been pretty incredible so far. Four different drivers have won races to start the season and while we have the most unique and diverse schedule in NASCAR’s modern era, breaking the record of most different winners in a season would have to require some crazy things to happen.

If you are keeping score at home, it is a 98-race stretch in which NASCAR has had 20 different winners. That’s including the four different winners to start the 2021 season. To break the record is asking a lot.

Like the start to every season things happen that are unexpected. People try and predict things and are usually proven wrong. However, midway through, like any season, those unexpected things eventually become a normality. For example, it is clear that Hendrick Motorsports has found some speed on the 1.5-mile tracks and while some may be shocked that is the case, I don’t believe that is going away anytime soon.

With the lack of practice and limited track time these teams have added to the parts freeze in place for the 2021 season, it will make gaining ground on the competition extremely difficult. Also a factor in this is the amount of money teams are pouring into research and development in 2021 for a car that will be obsolete in 2022. Teams see little benefit to pour hundreds of thousands of dollars for only a few races left with this current generation of racecar. All the money is being poured into the Next Gen car that will debut in 2022. This is different than any other year and it makes me believe that the haves and the have-nots early in 2021 will remain so throughout the season.

Sure, there’s always going to be some surprise winners on the circuit. Who could have predicted the miraculous win that Cole Custer pulled off in 2020? However, those wins are few and far between and while the 2021 season has had four different winners to start the year that number will dwindle quickly due to numerous factors including a couple of the reasons I just laid out.

While there are a few more wild card races on the schedule than in past years, I don’t think there are enough to make the number of different winners go over the number of 19. One race at the treacherous Circuit of the Americas (COTA) and the Dirt race at Bristol Motor Speedway may add to the list but from that point forward, there are tracks that many NASCAR drivers and teams are familiar with or require a similar setup to other racetracks.

You have to take into consideration the year the record happened. The sport was a completely different in 2001. While that year will live in a lot of people’s memories forever for many reasons, there is one factor that is overlooked when looking back on that season. That is the number of competitive, winnable cars in the field.

In 2001, NASCAR’s maximum car count for a race was 43. That number in 2021 has dwindled to 40, but that number is misleading. The charters only allow for 36 full-time teams to race on weekly basis. Sure, there are a few extra entries, known as open teams, but generally they are teams that are of the part-time variety and rarely race towards the front.

Plus, not every charter team is capable of winning a race. If you calculate a few of the back marker teams that make races on a weekly basis, the number of teams that can even run remotely close to the lead lap on a weekly basis drops to about 25. That doesn’t even count the winnable cars, which some may tally somewhere around 15 to 20 and that is being generous depending on what type of racetrack they are at and if everything breaks right.

No matter what the number is it’s a far cry from the number of winnable cars in 2001. That year, full-time, fully funded teams were going home on a weekly basis with a 43-car field. It was a completely different world, and the depth of the field was much deeper.

In addition, 2021 will feature a playoff system, something that wasn’t around in 2001. It’s very rare to see non-playoff drivers win a playoff race because many playoff teams are putting much more emphasis on those particular races. Usually, playoff drivers and championship contenders have a win by the time the playoffs come around and they are the ones knocking out wins come playoff time. That means if a non-playoff driver wants to win a race, they’ll most likely have to do so within the first 26 races of the season. Asking to pull off 20 different winners in 26 races is nearly impossible.

In the end, I do think we will have somewhere close to 15 different winners in 2021 and that is still a pretty good number which will create a lot of buzz and a lot of attention come playoff time. However, asking to break the record set in 2001 just isn’t possible. – Clayton Caldwell

I love you Kyle Larson