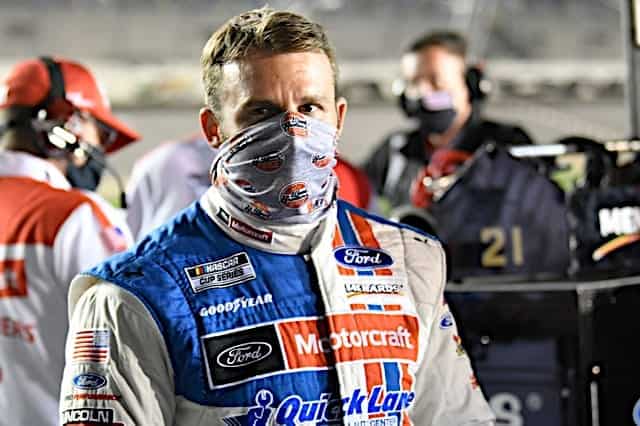 Raise your hand if you thought that, two races into the 2021 NASCAR Cup Series season, the two race winners would be Michael McDowell and Christopher Bell.  If you made that prediction a few weeks ago, a fellow race fan might have assumed that you’d spent too much time around the gasoline fumes on pit road.  But sometimes nothing is stranger than the truth.  The 2021 Cup Series season has begun with two very unexpected winners.

McDowell was a highly unlikely winner of the Great American Race.  It’s true that McDowell has enjoyed some good runs on superspeedways before, and that Front Row Motorsports won at Talladega Superspeedway in 2013 with David Ragan.  But McDowell had rarely been close to victory lane himself.  In 357 starts prior to the Daytona 500, he had only three top fives and 12 top 10s in the Cup Series.  His best finish was fourth, also at Daytona, with the now-defunct Leavine Family Racing in 2017.  Professional stock car racing is a cutthroat world where drivers who do not produce good results right away can easily get chewed up and spit out.  Credit McDowell for beating some long odds to win the biggest race of them all.

Speaking of producing good results right away, Bell has made the most of his opportunity with Joe Gibbs Racing.  He took some heat for triggering the early crash in the Daytona 500, and tire issues eventually spoiled what looked like a promising run.  But on Sunday at the Daytona International Speedway road course, Bell was flawless when it mattered most.  He showed speed throughout the afternoon, keeping within striking distance of a dominant Chase Elliott late in the race.  But after most of the leaders pitted during a caution on lap 57 for rain, Bell found himself among several fast cars stuck back in the back with fresh tires as the laps wound down.

After green flag racing resumed, Bell’s biggest competitors, one by one, made costly errors that knocked them out of contention.  Martin Truex Jr. spun in turn one after a restart, losing valuable track position.  Kyle Busch got damaged in the stack-up following Truex’s spin, ruining his race.  Kyle Larson’s charge through the field ended when he slammed into the tire barrier at the exit of turn six.  Elliott survived a wild ride through the infield grass and nearly ran over a sponsor sign.  But a few laps later, he spun in turn six as well, ending his shot at victory.  With so many veterans making mistakes, how unbelievable was it to see Bell, in just his 38th Cup Series start, chase down Joey Logano in the final laps and claim his first victory at NASCAR’s highest level.

McDowell and Bell have a lot of reasons to celebrate their wins, including their likely participation in the 2021 playoffs.  The current rules dictate that the Cup Series playoff field consists of the top 16 drivers in the points standings with at least one win after the 26th race, as long as the winning drivers are in the top 30 in points.  Since NASCAR implemented a 36 race schedule in 2001, there has never been a year where 16 different drivers won a race in the first 26 races.  Chances are high that one win each will be good enough to get McDowell and Bell in the playoffs.  And even though the playoffs are a long way out, that’s bad news for more than a few drivers with postseason aspirations of their own.

Just as it was unlikely for both McDowell and Bell to have wins early in the season, having both of them in the playoffs is a scenario that few people predicted.  Bell figured to be one of the drivers who would hover around the bubble this year, a potential contender but not a shoe in for the postseason.  McDowell’s only realistic shot to make the playoffs was to do what he did at Daytona – grab a win at a track where the competition is on a more level playing field.  But regardless of how they got there, Bell and McDowell are already occupying two of the 16 playoff positions, and none of the title favorites have even won a race yet.  As more of the top contenders reach victory lane, the pressure will only heat up for other borderline contenders fighting for the last few playoff spots.  These drivers will have to either follow Bell’s example and win a race or hope that they can accumulate enough points to make the cut.

For example, I wrote last month how a few surprise winners could be disastrous for Aric Almirola’s playoff hopes.  Almirola had a fast car in the Daytona 500 but crashed out early, missing one of his best opportunities to win a race in 2021.  After an up and down race on Sunday, he is currently 21st in points.  It is a good thing that Almirola picked up 10 additional points for winning his qualifying race, or he would be a lot worse off.  Keep an eye on where the No. 10 car is relative to the playoff cut line as the season progresses.

Another driver to watch, one who is in far worse shape than Almirola, is Matt DiBenedetto.  After two races, DiBenedetto has only accumulated five points.  Remember last year that the No. 21 team was in position to make the playoffs but faded down the stretch.  DiBenedetto did squeak into the postseason, but it was his hot start to 2020 that really saved him from getting left out.  Now, with no hot start to fall back on, DiBenedetto and the Wood Brothers will have to rally to get back in the playoff conversation.

Plenty of other playoff hopefuls have already put themselves in a hole.  Tyler Reddick is 34th in points after crashing in both races.  Popular rookie Chase Briscoe lost out on a top 10, and a lot of points, when his car gave up the ghost in the closing laps of Sunday’s race.  Even William Byron, who reached the 2020 playoffs by winning the regular season finale in spectacular fashion, is clinging to 30th in points.  All of them have a lot of ground to make up in the next few weeks.

The good news for these drivers is that fortunes can change quickly in NASCAR.  There is plenty of opportunity over the next six months for all the Cup Series drivers to secure playoff positions.  But it is worth wondering how two surprise winners will affect the race to set the postseason grid.  McDowell’s and Bell’s moments of triumph are sure to cause some sleepless nights for a few others.

i’m thinking ryan blaney has to be feeling the pressure to win.