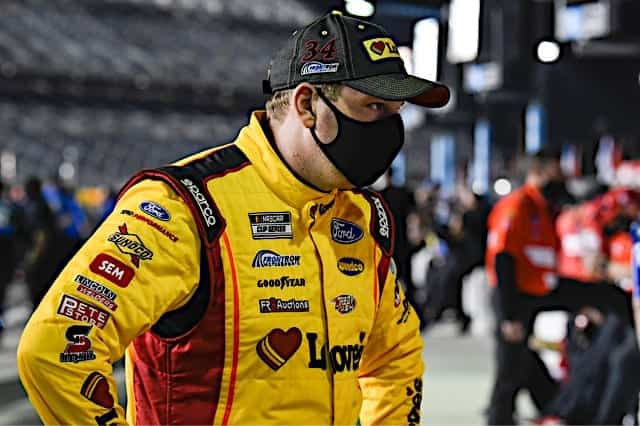 For Michael McDowell, it was worth the wait.

The No. 34 Front Row Motorsports Ford driver earned his first career win at Daytona, taking the underdog team to victory lane in his 358th career start. McDowell was in the right place at the right time when the seas parted in front of him, teammates Brad Keselowski and Joey Logano making contact while fighting for the lead with Team Penske.

McDowell crossed the finish line in front of Chase Elliott and Austin Dillon, but was also out front when the caution lights on the final lap came on due to the wreck. The Front Row Motorsports driver had been in the mix all race long, running near the front and staying consistent on pit stops. That left him third and in position to take advantage when the last-lap wreck occurred.

“So many years, just grinding it out and hoping for an opportunity like this,” McDowell said. “I’m so thankful. Such a great way to get a first victory. Daytona 500! Are you kidding me!”

McDowell becomes the third driver this century to earn their first victory in the Great American Race, joining Trevor Bayne and Michael Waltrip.

For Keselowski and Logano, it was heartbreak after they entered the last lap 1-2. Fords were well positioned after the final round of pit stops, holding all spots inside the top five but the Team Penske collision led to a Big One on the backstretch.

“Went to make the pass to win the Daytona 500 and it ended really bad,” Keselowski said. “Don’t feel like I made a mistake but I can’t drive everybody else’s car.”

“Pandemonium, I guess,” Logano added. “Chaos struck. It ended up being a really big run coming at me and we all collided in one spot.

Retweet to congratulate Michael McDowell on his #DAYTONA500 WIN after a huge crash coming to the finish!@Mc_Driver | @Team_FRM pic.twitter.com/lTsyYF7Gxq

That Ford was McDowell, who became the third driver in the last five years to win leading only the last lap of the Daytona 500.

The surprise victory came long after the field took the green flag shortly after 2:30 p.m. ET, with Alex Bowman leading the first lap and a track-wide salute to Dale Earnhardt on the third. Fans in the stands held up three fingers to salute the 20th anniversary of Earnhardt’s death in the 2001 Daytona 500, but before the lap was over Derrike Cope hit the wall to bring out the first caution.

Once the race was back underway, it didn’t take long for the track’s trademark Big One to hit, albeit uncharacteristically early. On lap 13, Aric Almirola got a push from Christopher Bell at just the wrong angle, sending the No. 10 spinning to the outside and into Bowman. The pair collected 14 more cars, bringing the total number of victims up to nearly half the field. All three Front Row Motorsports drivers and both Roush Fenway Racing cars were involved, as well as the likes of William Byron, Martin Truex Jr. and Ryan Blaney. In the end, nearly 30 percent of the field (11 cars) were inside the garage by the time 15 laps were completed.

The massive pileup was quickly followed by a nearby lightning strike, putting the race in a holding pattern, and rain swept in soon after. Track drying efforts proved futile, causing a more-than-six-hour delay before racing got back underway around 9 p.m. ET.

Kevin Harvick escaped the wreck and led the field back to green under the lights, but Denny Hamlin found his way to the front before another caution flew, this time for an incident between rookie Chase Briscoe and Quin Houff. Houff hit a piece of debris from Byron’s car and cut a tire, causing the incident.

Hamlin won the stage with several close calls happening behind him, including near-contact between Bubba Wallace and Joey Logano. Going on to win the second stage as well, he led a race-high 98 laps and appeared to be in position to win three straight Daytona 500s.

But history was not on his side. During the final round of green-flag pit stops, the Toyota teams of Hamlin, Kyle Busch and Wallace pitted together only to come back on track spread apart. They were sitting ducks for the freight-train draft of Fords and Chevrolets that powered past them, pushing Hamlin to ninth on back.

“Dominant car,” Hamlin said after the race. “Just came off pit road too fast, I guess.”

In the final stage, those pit stops happened by manufacturer and teamwork got the Fords out in front. Logano, Kevin Harvick, Keselowski, McDowell and Cole Custer formed a 1-2-3-4-5 freight train, forcing the rest of the draft in line. A lead draft of about 15 cars remained that way until less than two laps to go, giant runs changing the pack quickly and causing the shuffling that lead to the wreck on the backstretch.

“It’s to be expected, you know,” Kyle Busch said of the last-lap mayhem. “Just a matter of time before it I saw a window on the outside and then I saw the 2 car on my hood.”

The wreck was vicious, as Keselowski was hit by Kyle Busch and spun up into the catchfence, ripping the back of the car apart as it burst into flames. Rookie Austin Cindric, who ran up in the top five much of the race, Custer and several others were involved. Thankfully, ll drivers exited their cars under their own power.

McDowell was out front when the caution lights waved, securing his first career win on the biggest stage. Chase Elliott was scored in second, his best career Daytona 500 finish, followed by Austin Dillon, Kevin Harvick and Hamlin.

The Cup Series will return to Daytona next weekend for a race on the 3.57-mile road course. The O’Reilly Auto Parts 253 wil take place on Sunday, Feb. 21 at 2:30 p.m. ET with television coverage provided by FOX.

When is NASCAR going to end the ridiculous so-called plate racing (I know; it’s a tapered wedge now–same difference) that keeps cars bunched in packs and causing these horrific wrecks. NASCAR says it’s all about safety; but Newman almost got killed last year, and someone could easily have yesterday/last night.

If NASCAR is all about safety, as they claim, they will take steps to end the carnage and danger of plate racing.