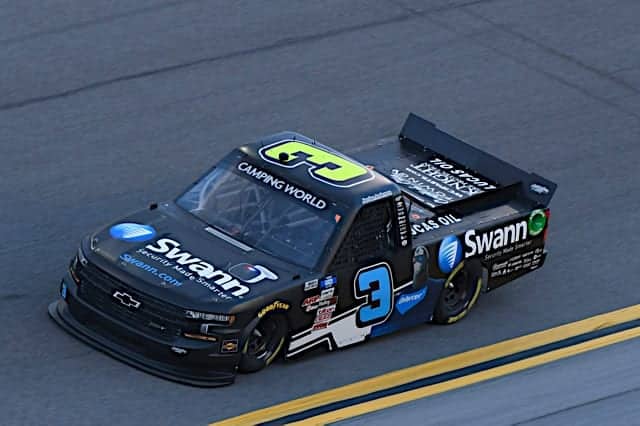 Jordan Anderson was outside the top 10 when the NASCAR Camping World Truck Series field took the white flag in Friday’s NextEra Energy Resources 250.

He sat eighth when there was half a lap to go at Daytona International Speedway, mired in the middle of the pack, and lost another spot to David Gilliland when the field came out of the final turn.

But when the checkered flag waved, Anderson crossed the line in second.

The result was Anderson’s second straight runner-up finish in the season opener and just his second career top-five finish; both of them against ThorSport Racing trucks. In 2020, Anderson and Grant Enfinger banged fenders all the way to the start-finish line, while on Friday (Feb. 12) Anderson had a run on Ben Rhodes coming to the finish but came up less than a half-truck-length short.

“Never give up, never give up,” Anderson said in his post-race interview on Fox Sports 1. “I know I’ve got my mask on, but I’m still smiling. ‘Truck Night in America’ … I need to go back to Chevrolet and see if they can make these Silverados a little bit longer. Two years in a row, to finish second here, it’s a dream come true.”

Rhodes got by leader Cory Roper entering the tri-oval, while Anderson avoided a crash that collected nearly 10 trucks to put himself third. Roper faded back as Rhodes passed him, while Anderson made a run on the inside and nearly nipped the No. 99 at the line, putting Roper back in third.

Anderson qualified 20th earlier in the afternoon and ran in the middle of the pack for most of the night, finishing outside of the top 10 in both stages. His evening seemed to take a turn for the worse just past halfway, when Austin Wayne Self was turned down the frontstretch and hooked the No. 3 on lap 60. Anderson made minimal contact with the outside wall, but 20 laps later, he was still mired in 25th.

To jump from there to second, with the track clearing in front of him almost miraculously was a major accomplishment.

“Back in December, we decided that we wanted to start an Xfinity team up and we were literally this close to shutting down our Truck program…I’m almost speechless,” Anderson explained. “…So much energy, so much emotion. … I shouldn’t be here, I shouldn’t be racing in a national series. Coming from Columbia, S.C., nobody in my family raced, [but] my dad’s here with me.”

The race was Anderson’s 125th start in the Truck Series, a career that dates back to 2014. He raced for the likes of Mike Harmon, Jeff Bolen, Rick Ware and Tracy Lowe en route to starting his own team for the 2018 season, when he immediately recorded a career best of ninth in the season opener at Daytona.

“My dad and I…came here originally for the first time in 1999 and watched Speedweeks down here,” Anderson said in his post-race press conference. “As a kid, growing up and wanting to be a racecar driver, Daytona’s the holy grail of every single track that we go to. …To be able to come here two years in a row and finish second, that was a pure Moses moment that we just had earlier tonight: to go from 11th or 12th coming to the white flag and just the way everything worked out.”

“My whole life,” Anderson added, “having to fight and claw for everything that we have, all the partners and sponsorship that we’ve been able to put together and the people that have jumped behind us, to just be here on this national stage is so special and means so much. You asked me how I can get excited about it, just being here is exciting; to have an opportunity to race in NASCAR, the Camping World Truck Series, to be here in the series and compete is amazing enough…

“I think I’m most happy because we were, a month ago, so close to shutting down our truck team. …To come that close again to winning one of these things, the whole last lap is a blur.”

Since his team’s top-10 debut, Anderson has since scored four more such finishes, including Friday’s result, and was set to debut the self-owned team’s Xfinity Series car on Saturday at the superspeedway before rain washed out qualifying Saturday (Feb. 13). The No. 31 will be driven full-time by Anderson, who declared for points in NASCAR’s secondary series for 2021.

“To go through all that we’ve gone through, to never give up; you asked me earlier today what I would say is my story, and it’s for every kid that races late models, legend cars, dirt late models out there: Never give up,” Anderson concluded in his post-race interview. “If you want to be here, just keep digging. I’ve got so many people to thank, you guys would probably start playing the exit music on me. Just so amazing to be here. We were like 12th on the final lap… [and we’re] going Xfinity racing, second at Daytona… let’s go!”

Asked in his post-race press conference when he would be back in the No. 3 truck, Anderson pinpointed Las Vegas Motor Speedway as his return to the Chevrolet. Bobby and Roger Reuse will drive four races each in the No. 3 truck for Anderson, with the former running the race at the Daytona road course next week.