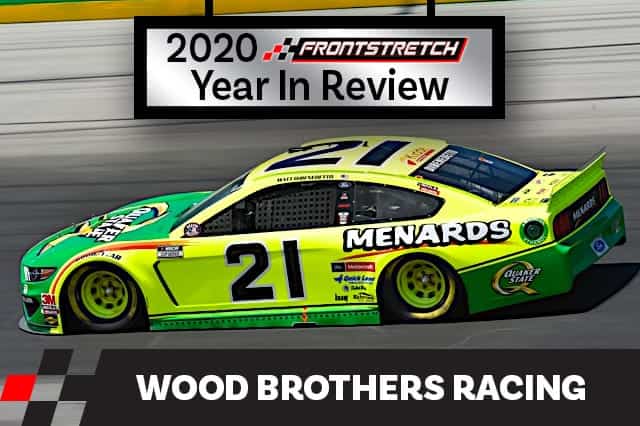 When Matt DiBenedetto fires the engine on his No. 21 Ford for the 63nd running of the Daytona 500 next February, his second full year for the team, Wood Brothers Racing will be starting its 68th season in NASCAR, five more years of stock car longevity than the Great American Race itself.

In a sporting context, legendary is an oft-misused word, a title that’s bandied around and lightly bestowed – ascribed often without anything like the necessary credentials to back it up. But in the case of the venerable Wood brothers, the term is both well and hard earned over just shy of seven decades of commitment to the craft.

Big picture-wise in 2020, making the playoffs, a career first for the driver, and finishing 13th in the final standings represents a solid season for the team, especially given the unique challenges brought on by the COVID-19 pandemic. DiBenedetto also recorded career bests in top fives (three) top 10s (11) and average finish (14.3), besting his previous high water mark by some 3.5 spots – a significant improvement.

“We had a lot thrown at us, and it was especially hard on us being a new group,” DiBenedetto said in a season-ending team release. “There are a lot of things we would have learned in practice and been able to apply to the car in a normal year. Instead, we had to learn during the race.”

The chase for the elusive 100th victory will, however, continue into 2021.

In what is becoming something of a hallmark of his career, DiBenedetto came close to the maiden victory he — and his team — so craves on three separate occasions in 2020. For the record, the last WBR Cup victory came in June 2017 at Pocono Raceway with Ryan Blaney winning his ever first Cup race. Before that it was Trevor Bayne’s upstart and upset victory in the 2011 Daytona 500.

The Grass Valley, Calif., native’s first near-miss came at Las Vegas Motor Speedway when an untimely caution on the white-flag lap saw him miss out on one last shot to catch race winner Joey Logano. “This is all just too surreal,” DiBenedetto said post-race. “Tough to be that close, but hey, this is only the second race of the season. So it was the strength of this team. It’s so cool to have the backing of all the people that allow me to drive this thing.”

In the 17th race of the year at Kentucky Speedway, DiBenedetto finished third behind debutant winner Cole Custer with a strong finish. “I think if I’m correct we went from 18th to third in the last, like, seven laps,” DiBenedetto said afterward. “We made a monstrous restart. My spotter Doug Campbell deserves a lot of credit for helping me. We went around most of the field on the outside, made a power move. Credit to him, the team, Wood Brothers for giving me a super-fast car.”

As the playoffs drew closer, DiBenedetto’s once comfortable points advantage was whittled away to the point that it was decidedly meager with just the regular season finale at Daytona remaining – a scant five points over William Byron and just nine markers ahead of Jimmie Johnson. And by the end of the first stage, DiBenedetto was already on the wrong side of the playoff cutoff line. But in the end after a race replete with drama, he snagged his playoff spot.

“You couldn’t have scripted it any crazier than that,” DiBenedetto said afterward. “We had a decent points cushion, and we were really getting in a groove, the last few weeks were just rough on us. And that’s just part of it.”

DiBenedetto didn’t make it past round one of the playoffs, finishes of 21st, 17th and 19th not being nearly enough to progress. But just making it represents success that he can build on in 2021. The fourth playoff race was another of DiBenedetto’s near misses – finishing second again – this time behind an ebullient Kurt Busch.

“Man, I’m just so proud,” he said. “I want the Wood Brothers 100th win so bad. I love driving for this team, I hope I get to drive for them for a long time to come. … It’s tough to come that close, but really proud of the team, pit crew, my crew chief Greg Erwin, all these guys. We’ll get us one.”

DiBenedetto went on to finish second yet again at Talladega Superspeedway, but in the final reckoning a penalty from NASCAR for pushing Byron beneath the yellow line saw him relegated to a 21st-place finish. Having led the field to green at the final restart, it was certainly another tough result.

The crushing disappointment of Talladega was, however, quickly erased just four days later with the announcement that he would return to the No. 21 in 2021. Austin Cindric will be waiting in the wings to take over in 2022, but for now, DiBenedetto’s future is secured.