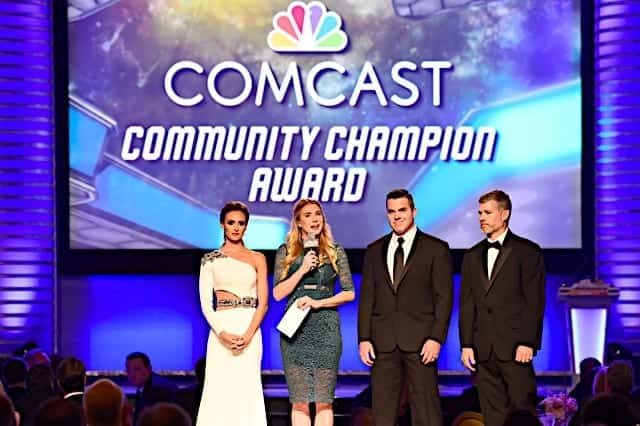 Since Comcast entered NASCAR as the entitlement sponsor of the NASCAR Xfinity Series, it’s given back to the community. The company focuses on awarding people within the racing community for philanthropic initiatives via the Comcast Community Champion of the Year award.

The award, presented every year during championship week, has been granted to drivers, pit crew members, track presidents and even fabricators back at the race shop. Many short videos are submitted, but the winner is selected by a panel that consists of Comcast and NASCAR executives, plus the previous year’s champion. First place is award a donation of $60,000, while the other two finalists receive $30,000 apiece.

Over the past six years, there have been no shortage of feel-good stories. So Frontstretch recently caught up with four previous finalists ahead of this year’s award to give an update on how the foundation is doing as well as how the donation from Comcast helped their community efforts.

Just a few months prior to graduating high school in 2011, Joey Gase‘s mother, Mary Jo, passed away due to a brain aneurysm. At the time of her passing, her family wasn’t aware she was an organ donor but later found out when going through her wallet.

Mary Jo Gase happened to be an organ donor through the Iowa Donor Network. Since her passing, her organs have helped save the lives of more than 70 people.

As Joey Gase chased his dream of being a NASCAR driver, Donate Life became heavily involved as one of his sponsors, even outside of Iowa. According to Gase, there are 58 organ procurement organizations across the country, and his racecar helps promote the organ donation and honor all of those affected by it.

Five years ago, the wait list for people needing organs was growing. Since then, that’s reversed.

“I think what we’re doing is really, truly helping in the racing world, getting people to register and informing them about donations,” Gase says. “In general, more people are signing up and becoming organ donors, which is awesome.

“Another thing we’re trying to promote now are organ donations from when you pass away, but you can also be a living organ donor. … You’re seeing more and more people beginning to do that as well.”

In 2015, Gase won the inaugural Comcast Community Champion award for his efforts with the Iowa Donor Network. He says the exposure from winning the award helped the donor organization a great deal.

“The money went a long ways for Iowa Donor Network, but on top of that the publicity side of it and raising awareness for donations,” Gase says. “We got the award at the Xfinity and [Gander RV & Outdoors] Truck Series banquet, so that was broadcasted live on TV with my speech. Hundreds of thousands of people saw that, and all the things they are continuing to do to raise awareness.

“It goes so far and so cool that there are so many people that come up to me and hear my mom’s story from the Comcast Community Champion award, or what we’re doing with our Donate Life partners and saying, ‘I was never a registered organ donor until I heard your mom’s story’ or whoever is on the car that weekend.”

Prior to 2014, Kyle and Samantha Busch used the Kyle Busch Foundation as a way to give back to the community and buy prom dresses and bridal gowns for women.

While struggling to conceive for their first child, the Busch family ultimately had to settle with in vitro fertilization, allowing them to have their son, Brexton. While going through their own journey, the couple realized how quickly the bills can stack up. At that point, many couples’ journeys are over before they really began.

The Buschs worked with their local REACH (Reproductive Endocrinology Associates of Charlotte) infertility clinic to set up the process of creating the foundation. There, applicants document how long they’ve been trying to conceive for, what they’ve been through and write an essay. Then the application goes through REACH and helps determine what couples could benefit the most financially. At that point the Buschs narrow it down even further.

“We knew this was our calling and we knew that there wasn’t many groups out there supporting IVF financially for couples,” Samantha recently said. “We really felt like we always prayed about it, God was like, ‘You’re going through this journey for a reason.’

“Seeing the couple – it was like a visible weight was lifted off their shoulders when we told them that we would be paying for their treatment. We started working really hard for that.”

On Oct. 26, Samantha presented a $10,000 check to Cynthia and Erik Jackson, making them the 62nd couple the Buschs have helped on their journey. Thus far, 30 new babies have been born, on par with the roughly 50% IVF success rate.

While sharing her own personal story, Samantha was a finalist for the Comcast Community Champion award in 2016, and received $30,000 for her community efforts. That check alone was able to help two couples, as Bundle of Joy grants range between $10,000 and $20,000.

“It’s so nice that Comcast gives back in that way and realizes that obviously the drivers do what they do on the track, but I think for many drivers and people in NASCAR, their foundations are so important to them.”

Many people do not know the name Wade Jackson, who’s a fabricator at JR Motorsports. But his charitable story is inspirational.

Jackson’s son Jacob was born with a congenital heart defect. While growing up, the Jacksons looked for summer camps for their son to attend, but many camps couldn’t take on the “liability,” says Jackson. That’s when Jacob and his mother Kim flew out to California in the late 2000s to attend Camp Taylor on three separate years, one week apiece.

Jackson notes those weeks changed his family’s life. Knowing there wasn’t a camp on the East Coast like this, that’s when Jackson made a difference. In 2010, the family opened Camp LUCK, a family camp intended to provide a place for kids with heart diseases to gather together and experience community activities. After the first year, Camp LUCK opened up its Kids Camp.

Unfortunately, Jacob passed away from a stroke in December 2010 after having open heart surgery when he was just 17 years old.

Since then, the Jacksons have dedicated Camp LUCK in Jacob’s name, knowing he’d be proud of their efforts of and turning it into his legacy. At the camp, kids can go rock climbing, mountain biking, canoeing, fishing, zip lining and more.

“As the kids are growing older and maturing, they are maturing from campers into counselors and junior counselors,” Jackson says. “It’s really neat now because we’ve been doing it for 10 years to see the kids that were kids are now 16, 18 years old and wanting to stay in touch with the camp and still be a part of it.”

Over the past 10 years, Jackson has worked tirelessly to grow the camp where, families can spend a weekend together at the site. In 2016, he won the Comcast award, and a $60,000 donation was given to Camp LUCK in his efforts.

“It ensured that we would be able to keep giving to those kids and those families because a lot of those families – for the siblings – they miss out on vacations, they have to go to the hospitals,” Jackson says. “They can’t go do stuff because they’re having to leave a family member behind for them to go and do different activities.”

Camp LUCK has had approximately 1,300 kids on site over the past 10 years.

In 2012, Krissie and Ryan Newman founded the Rescue Ranch, located in Statesville, N.C. Their goal was to promote humane education by focusing on rescuing on a fundamental level through hands-on learning and care for animals.

The learning isn’t solely centered around companion animals, but outdoor animals and agricultural animals as well. The last headcount Newman had heard was 83 animals on the premises, with roughly 25 to 30 different varieties. Most of the animals are donated to the ranch with the intention of using them for educational purposes.

Over the years, the Newman’s raised $500,000 for an inclusive playground where kids visiting the camp can play. Meanwhile, it also put together a Special Needs Summer Camp week to create more opportunities for children to learn. Newman says he’s still working on creating an adoption center for the pets.

Though animal care is something Newman is passionate about, growing the ranch hasn’t been all glitz and glamour.

“It’s been a struggle, I’m not going to kid you,” he says. “The financial side of things, some of the newness wares off. We’ve still got a great rapport with people in the community with camps, summer camps, educational opportunities, field trips and things like that, but it’s a challenge to continue to grow that.”

In 2018, Newman was one of the finalists for the Comcast award, receiving $30,000 for his effort. Having that platform to make more people within the racing industry aware of the ranch is what mattered the most.

“It was great on the awareness side,” Newman says. “On the financial side, whether you win or you still get a check and that’s one of the things that we’re very grateful for. That check in turn helps educate kids and learn our programs, and helps pay for the educators. That’s key; that the awareness comes along with it.”

This year’s Comcast Community Champion of the Year will be held virtually on Friday, Nov. 6. Bubba Wallace‘s To Live to Be Different Foundation, Matt Kaulig’s Kaulig Charitable Giving Programs and Clay Campbell’s Campbell Family Foundation are the 2020 finalists.

Who will win the suspense is killing me…oh wait its BUBBA!!!

What about the others?