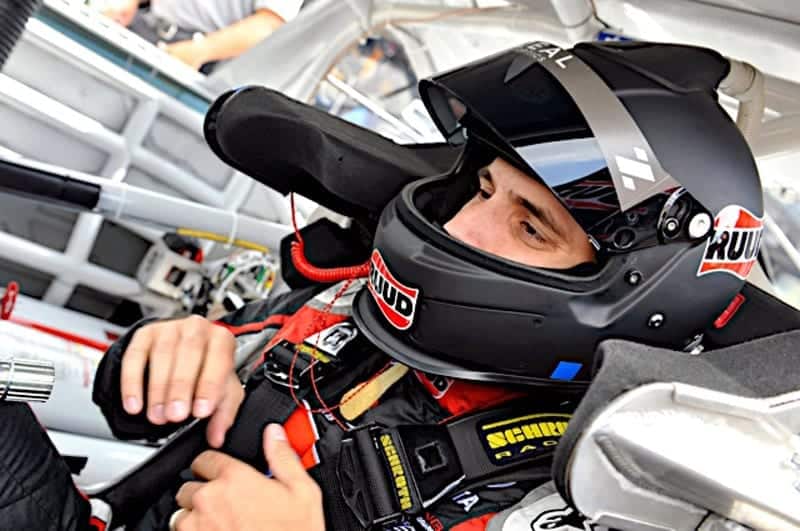 Meanwhile, when the green flag flies, James Buescher will make his first start since 2015, piloting the No. 42 Niece Motorsports Chevrolet with backing from FHE Fraclock.

“I am thankful for everyone at Niece Motorsports and FHE for believing in me and providing me this opportunity to get back behind the wheel and once again showcase my talents,” Buescher said in a team release. “When I exited the sport back in 2015, it was not on my own terms. We had a lot going on at home in 2015. Sometimes you have to take a step back and pay attention to God’s plan for your life.

“Right now, everything has fallen into place to come back and race at my home track at Texas Motor Speedway, and I could not be more excited! It’s going to be challenging after more than five years away from racing, but I am up for the challenge and can’t wait for the green flag to drop.”

Growing up in Plano, Texas, Buescher spent time racing Bandoleros at Texas Motor Speedway and became the Young Gun national champion in 2004. In the years that followed, he raced in the ASA Late Model Series, ARCA Menards Series and the ARCA Menards East Series.

Fast forward to 2008 when Buescher actually began his NASCAR career in the Xfinity Series. He made six starts for Braun Racing, including a best finish of seventh at World Wide Technology Raceway at Gateway. Buescher also made his Truck Series debut in the 2008 season finale at Homestead-Miami Speedway with Billy Ballew Motorsports.

The following year, Buescher replaced Brendan Gaughan at Circle Bar Racing where he posted one top five and three top 10s in 25 races, including a best finish of fifth at the Milwaukee Mile. It was the only season he spent with Circle Bar as he moved to Turner Scott Motorsports in 2010 in what was scheduled to be a nearly full-time partnership. Buescher didn’t run the first three races and made a one-off start with Stringer Motorsports at Nashville Superspeedway where he finished 13th.

Buescher ran the balance of the 2010 season with Turner Scott and finished 11th in the championship standings with six top fives and 10 top 10s. He remained with the organization in 2011 and, after failing to qualify for the second race of the season at Phoenix Raceway, he racked up 10 top fives and 19 top 10s to earn him an average finish of 6.7. Despite missing Phoenix, Buescher finished the year third in the standings, just 29 points behind champion Austin Dillon.

After coming so close to winning the championship despite missing a race, Buescher remained with Turner Scott where he finally scored his first career win at Kansas Speedway. That season, he won three more times, all on mile-and-a-half tracks (twice at Kentucky Speedway and once at Chicagoland Speedway) and went on to win the championship by six points over Timothy Peters after sitting atop the standings for the final four weeks of the season.

Buescher spent one more full-time season in the Truck Series in 2013 and finished third in the championship standings with two wins, four top fives and 14 top 10s. He moved to the Xfinity Series in 2014 with RAB Racing and backing from Rheem. That season was mediocre at best and the organization opted to place its the majority of its focus on the Cup Series instead.

The following year, he was picked up by NTS Motorsports for “select races.” Translation: part-time schedule, pending sponsorship. After running the first three events, Buescher was sidelined, despite a press release from GunBroker.com stating it would back him in five events. But two straight weeks saw Buescher on the entry list, only to be replaced late in the week.

“I want to thank all my fans for continuing to stick behind me. I was looking forward to getting behind the wheel of the No. 31 NTS Motorsports Chevy but unfortunately, plans changed,” Buescher said in a statement at the time. “I want to thank Bob Newberry and everyone at NTS Motorsports for giving me an opportunity early this season; we had a great run going and I was looking forward to seeing how it was going to turn out.

“At this point, I’m not sure when I’ll be back at the track, but when I do return I look forward to being a threat to win every single time out.”

Despite claims from NTS owner Bob Newberry and Buescher that he would be in a truck again at some point that season, he hasn’t made a NASCAR start since. At just 25 years old, Buescher was forced to walk away from the sport to support his family.

“I would have loved to continue racing, but I had two infant children at home, and it’s hard to run that travel schedule with two little ones, as a lot of drivers now,” Buescher told NBC Sports in April. “Traveling just made things pretty hard for us.

“As time went on, the phone wasn’t ringing to go drive a good race car. I had opportunities to go racing, but I had spent the previous season (2014 in the then-Nationwide Series) running 10th to 15th most of the year. You’re still driving a race car but it’s not fun, not for me anyway. I want to race and win.”

Since making his last start in NASCAR, Buescher and his wife Kris have built a successful real estate company and have since joined Compass Realty. The pair also continues to run The Buescher Foundation, which was founded in 2014 and helps couples with the costs and other resources related to adoption.

“It was time to do something else,” Buescher said of his former career. “My family has been home building and in real estate my entire life.

There’s no telling what this one-off race might mean for Buescher’s future in NASCAR, but it’s clear based on wife Krishtian’s Instagram post that there’s quite a bit of excitement surrounding his return.

“Well, the secret is out! This is such a surreal moment,” the post read. “For the last couple of years, James has been telling me that he really misses racing and would love an opportunity to get back into it. I just kept saying I’ll support you if something comes up.

“A couple of weeks ago, someone challenged me to pray specifically for that since it was something he really wanted to do. I took on the challenge and here we are! I could not be more excited for him and cannot wait to see him back on the track!”

I wouldn’t have high expectations for Buescher for a couple of reasons. Obviously, being out of racing for the last five years puts him at a disadvantage already, but throw in the lack of practice and qualifying, and you’ve got his first laps coming when the green flag flies on Sunday.

There’s no doubt that Buescher is talented, though, so it will be interesting to watch how quickly he’s able to adapt. And it wouldn’t be surprising to see a potential future ride hinge on how he runs this weekend.