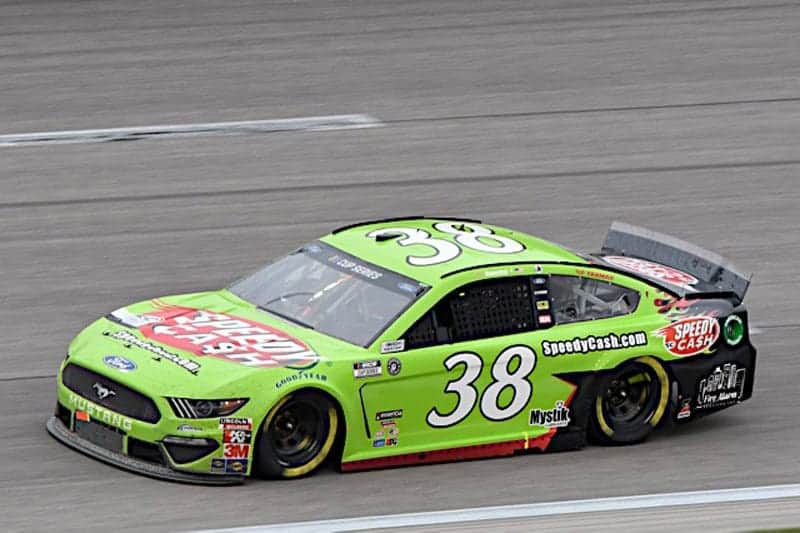 John Hunter Nemechek was back on top of the underdogs on Sunday as the rookie driver finished 17th in the Hollywood Casino 400. Nemechek earned his only career Xfinity Series win at Kansas Speedway, so perhaps we should have seen this coming. Not only that, but his first Gander RV & Outdoors Truck Series victory came at Chicagoland, a track very similar to Kansas.

While the race started well, it wasn’t all smooth sailing for the Front Row Motorsports driver. Contact with another car late in stage two damaged the right-front fender and forced the team to make repairs over the course of several pit stops prior to the start of the final stage. With the damage remedied, Nemechek was able to work his way back up through the field, earning his fourth top-20 finish in the past five races. It also marked the third time this year that Nemechek has put together such a streak.

“Our No. 38 Speedy Cash Ford Mustang was ‘speedy fast’ today,” Nemechek said after the race. “We fired off pretty decent and made a couple of slight adjustments throughout the day to get us to an even better place. We picked up some damage at the end of stage two, but my guys on pit road did a great job and we were able to overcome and stay competitive for the rest of the race.

“We never gave up and managed to come away with a top-20 finish. I’m really proud of my FRM team and so thankful for the effort these guys put in each and every week. A huge thanks to our partners at Speedy Cash for coming on board with us this weekend for their final primary race of the year. Hope we can see them again soon.”

Hot on the No. 38 car’s rear bumper was Bubba Wallace. Wallace put together a solid day that culminated with his 18th-place finish. Joining him was the second FRM driver, Michael McDowell, who rebounded from a disappointing day at the Charlotte Motor Speedway ROVAL to finish 19th.

On Saturday, the Xfinity Series took to the Kansas Speedway for its event, but it was Truck Series standout Austin Hill who finished fifth. Hill, moonlighting for Hattori Racing, earned his first top-five finish in just his ninth Xfinity start.

Right behind Hill was Josh Williams, who had another great day with his sixth-place finish. Former Truck Series champion Brett Moffitt came home seventh. Also finishing the day in the top 15 were Brandon Brown in 13th, Tommy Joe Martins 14th and Jeremy Clements in 15th.

The Truck Series rundown wasn’t much of a surprise as Derek Kraus once again was the best in class with his ninth-place showing. Former Daytona 500 winner Trevor Bayne was 10th in his fifth race for owner Al Niece. Bayne’s teammate Ryan Truex wound up getting the 12th spot, Tyler Hill was 14th and Parker Kligerman wound up 15th at the checkered flag.

It’s time for the Cup underdogs to do the Texas two-step as the series heads back to the Lone Star State. The underdogs at Texas Motor Speedway have been all over the place the last few races there. Wallace, Ty Dillon and McDowell have each been on top and none of them have performed consistently well. So it’s a toss up as to who will reign this weekend. I’d say McDowell is probably the guy to beat in this category.

As for the Xfinity teams, David Starr wound up 13th in the Bobby Dotter-owned No. 07 at Texas earlier this year. Couple that with the fact that Gray Gaulding finished 12th in the same car at Texas last fall and it looks like that may be the underdog car to beat.

The Truck Series race at Texas will be a home-state show for Austin Wayne Self, which could provide a little extra motivation for that team to put on a good show. Look for Self to run well, and I’d anticipate Truex continuing his recent success.

Can’t be any worse…

Hell, put me in!!! pic.twitter.com/oGfKBcrmjg

Caught this moment @Josh6williams was having after finishing 6th tonight.

Excellent finish for that team pic.twitter.com/z7g0oh9BzV

Maybe the 38 was told to stop spinning out on his own. Oh well, there’s always the next event.