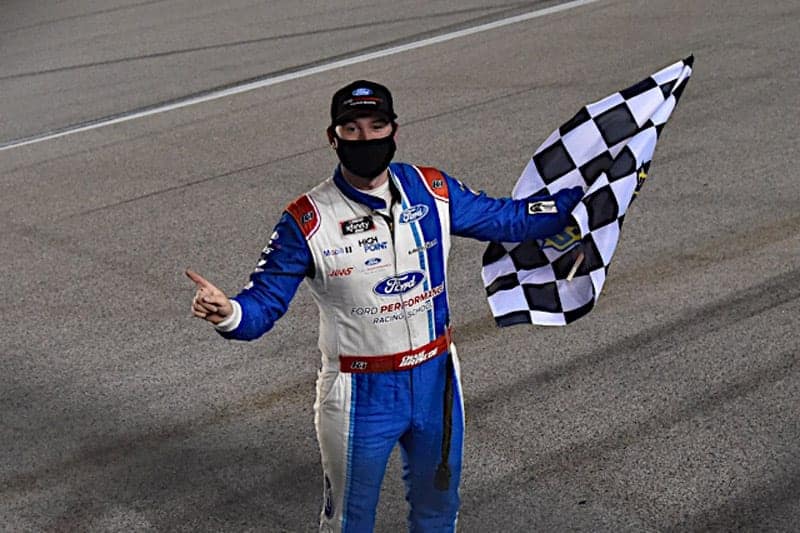 There was a moment this weekend at Kansas Speedway that typifies the spirit of NASCAR fans in one simple image. It was a picture Clint Bowyer tweeted post-race.

I think this perfectly sums up my run in @NASCAR and @kansasspeedway in particular. My fans ALWAYS have more fun than the others. Huge thank you to the KC area for all the support over the years, it’s been felt the whole ride.

I’m sure between now and the checkers in Phoenix, we’ll see some more tributes to the retiring veteran, but I can’t help but feel a tinge of sadness that he won’t get a chance to conclude his driving career properly in front of a packed house; he deserves it. Bowyer has been a wonderful advocate for the sport – and importantly his sponsors – for the past 16 years since his first full-time Cup season in 2006.

He’ll end his top-echelon career with 541 straight starts and at least 10 wins – an impressive effort. Truth is, the decision on 2021 may have been made for him by his team owners (more on that below), but there’s no question this is an excellent move for both the driver and the sport. Bowyer’s easy charm and quick wit will be a good foil for Mike Joy and Jeff Gordon, and he’ll bring some color and a fair bit of excitement each week. I wonder if there is a ‘Boogity Boogity’ catchphrase in his future? Wouldn’t surprise me. I’m looking forward to watching him as a broadcaster next season, but I will also miss his on-track presence. Best of luck, Clint!

Briscoe Gets His Shot

Back in February, prior to the season getting underway, Chase Briscoe was asked by David Smith (then of The Athletic) what he thought it would take to get a Cup ride.

“I feel like this is my make-or-break year,” said Briscoe. “If I go win eight or so races, then I feel like it shows I’m ready for Sunday. If I only win one or two races, I’m probably out the door and not racing anymore.”

Talk about calling your shot. Saturday’s win at Kansas Speedway was Briscoe’s ninth of the season. Two days later, the story broke that he would be taking over driving duties in the No. 14 car from the retiring Bowyer. It’s hard to argue anyone deserves it more. The kid can wheel a car. He’ll be 26 years old when he takes the green flag in the Daytona 500 after just 108 minor-league starts (83 Xfinity, 25 Trucks). If he doesn’t win another race, he’ll finish with a serious win percentage in the Xfinity Series – a ridiculous 13.2%. Briscoe began his career racing sprint cars, winning a 410 sprint car race at 13 years old and beating the old record set by none other than Jeff Gordon by a full year. Looking forward to seeing what he can bring to a good ride next year.

In an appropriate full-circle moment, the 2020 NTT IndyCar Series will conclude its pandemic-interrupted season on the street course of St Petersburg, Florida – the venue where it was supposed to have started all the way back in mid-March. And for Scott Dixon, chasing a sixth championship, a ninth-place finish would be enough for the title. The veteran open-wheel racer, now in his 20th year of competition, has led the standings from the very first race, and it would be something of a surprise were he not to finish it off at the final hurdle. In the past few years, the series has awarded double points for the final race – a factor that enabled Dixon to come from 47 points behind to beat out Juan Pablo Montoya to the 2015 title in a thriller at Sonoma. Could the same happen on Sunday to Dixon’s seemingly unassailable lead? Maybe, but I seriously doubt it. That being said, this is racing and stranger things have happened. Should be a fun one this weekend.

Huge congratulations to six-time world champion Lewis Hamilton on equaling the all-time wins total – 91 and counting – in Formula 1. The critics will decry his efforts, suggesting that his superior equipment is so dominant a factor as to be borderline unfair. Chase Elliott on a road course these past two seasons would be an apt comparison. But to criticize Hamilton for this reason would also obscure two vital factors: how hard he works at his craft and his immense natural talent.

No one comes close to putting down a qualifying lap like a flying Hamilton at the top of his driving game. Sometimes the great champions are most respected after their driving days are over, and this might be the case with Hamilton to some degree. Hamilton may very take over the outright lead in wins this weekend at the Autodromo Internacional do Algarve in Portugal, but whenever it happens and however many more wins he achieves in his glittering career, you do suspect that the final number will be a mark similar to Richard Petty’s 200 wins – no one else is getting close.

Next Up: Texas Motor Speedway

We’re getting to the serious business end of the season and with three races to go, we head to Texas Motor Speedway, site of next year’s All-Star Race, this Sunday for 501 white-knuckle miles or 334 laps on the mile-and-a-half track if you prefer. This will be Cup race number 40 at TMS, a streak that extends all the way back to 1997 and an inaugural race won by NBC broadcaster Jeff Burton. Shockingly, Jimmie Johnson leads the way with seven wins, while Kevin Harvick and Denny Hamlin both have three wins. Matt Kenseth has a pair of wins and Austin Dillon, Joey Logano, Kurt Busch and Ryan Newman all have one win apiece. For the seven remaining drivers in playoff contention, while Logano sits pretty waiting for the season decider, it’s hard to overstate the importance of this race, especially for those on the wrong side of the cut line. If you’re not looking forward to this one, I can’t help you. Enjoy the race, folks.

Maybe if those fans were spinning around…