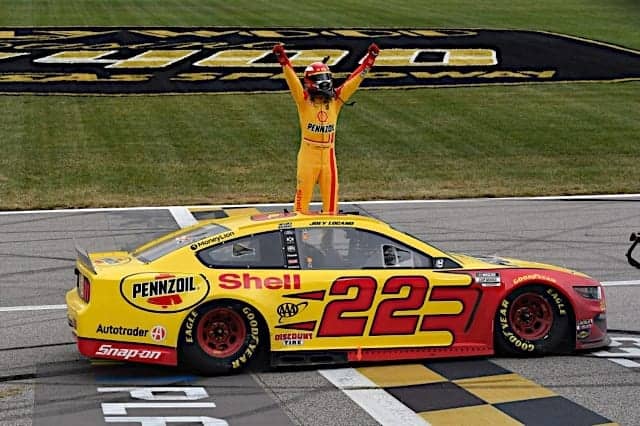 While 2020’s victory lane might have been dominated by Denny Hamlin and Kevin Harvick, Joey Logano became the first driver to punch his ticket to the Championship 4.

In Sunday’s Hollywood Casino 400 at Kansas Speedway, Logano beat Harvick off pit road during an exchange of stops with 45 laps to go. He made the advantage stick, blocking multiple charges at the lead by Harvick. Breaking Harvick’s momentum was the ticket for Logano to cash in for the victory.

“I felt like if I could hold him off for 15 laps, we’d have a chance,” Logano said after the race.

Harvick fought off a hard-charging Alex Bowman, who was ahead of Brad Keselowski and Kyle Busch. Chase Elliott took the checkered flag in sixth, with Ryan Blaney, William Byron, Martin Truex Jr., and Christopher Bell rounding out the top 10. Truex rebounded to ninth after starting the race from the rear of the field due to a penalty for failing pre-race inspection multiple imes.

Harvick led the most laps of any driver, doing so three different times for 85 laps. His first stretch kicked off 31 laps into the event, after which he paced for the field for 33 laps.

He had a fast car, but @KevinHarvick is forced to settle for a second-place finish. #NASCARPlayoffs pic.twitter.com/dFuMSl8uFf

Hamlin looked to be a leading contender for the win, leading three times for a total 58 laps and winning the second stage. Those chances were diminished early into the final stage when Hamlin scraped the wall. The No. 11 had to make an unscheduled pit stop and take the wave around to get back on the lead lap. Hamlin finished a disappointing 15th.

HAMLIN IN THE WALL! @dennyhamlin with significant damage to his No. 11 machine. pic.twitter.com/ADYToHgME2

Elliott, who won the first stage, finished sixth despite radio issues during the race that limited communication with his No. 9 team. Meanwhile, Kurt Busch finds himself in a must-win situation after blowing an engine, sitting 71 points below the cutline.

“We knew we’d probably have to win here, Texas [Motor Speedway] or Martinsville [Speedway], but we’re in the top eight for a reason,” Busch said. “We had an engine failure. There’s nothing we can do about it now.”

The caution flag played a limited role on Sunday, waving three times for on-track incidents; the first coming 143 laps into the race when contact between Matt Kenseth and Erik Jones significantly damaged the No. 42 car.

The final caution of the race, which set up Logano’s pit crew to make the race-winning pit stop, occurred as a result of Tyler Reddick being off the pace after contact with the wall.

The NASCAR Cup Series returns on Sunday, Oct. 25 for the Autotrader EchoPark Automotive 500 at Texas Motor Speedway on NBC.

I find it hard to believe that if you start side by side on the restart that your crew lost you the race on the pit stop. If you can’t pass that lead car when starting side by side, then you didn’t have a fast enough car or he out raced you.