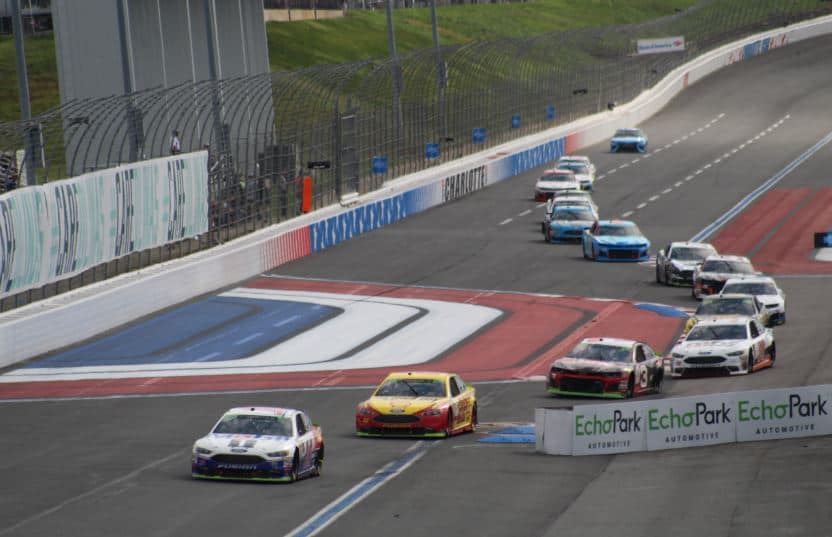 Well, Clint Bowyer is making a move, announcing Oct. 8 that he’ll be moving to the FOX broadcast booth in 2021.

Bowyer’s choice to leave NASCAR Cup Series racing for broadcasting was a good decision. He isn’t completely lost out there, as evidenced by his playoff run this season. But he also is performing nowhere near the best driver on his team and really hasn’t been the same driver since the Michael Waltrip Racing cheating scandal in 2013.

If there was one word to describe Bowyer’s career in Cup racing, it would probably be OK. After 536 starts, the Kansas native has 10 wins, 82 top-five finishes and 224 top-10 finishes. His two best seasons came in 2007, where the sophomore driver had a dark-horse playoff run that ended with a win at New Hampshire Motor Speedway and third in points.

In 2012, Bowyer had a stellar season in which he finished second in points and set career highs in most statistical categories. But after the MWR scandal, Bowyer spent a couple of fairly lifeless seasons at MWR before the team dissolved after 2015. Bowyer was given a golden ticket, handed the keys to Stewart Haas Racing’s No. 14. The only catch? He had to spend a lame-duck season with HScott Motorsports in 2016, and Bowyer struggled mightily.

After joining SHR, Bowyer has kind of just been there. His two highlights at SHR came in 2018, a win at Martinsville Speedway and a rain win at Michigan International Speedway. They were the first wins Bowyer had at the Cup level in six years.

Bowyer going into television full time is a smart move. He impressed this spring with FOX’s coverage of the Xfinity Series, where he and Jamie McMurray seemed to gel. These big network jobs don’t come around often, and once they’re filled, they’re filled for a very long time. If Bowyer had raced another couple of years, it’s doubtful that network job would still be open. Now he can still be a visible part of NASCAR for many years to come.

It’s pretty clear that Chase Briscoe is going to that ride.

Nothing is ever official until it’s official, of course, but look at his resume. Dirt track star, the kind team co-owner Tony Stewart loves. Would be a promotion from within SHR. And oh, yeah, he’s won eight races this season and is competing for an NXS championship.

Briscoe’s ascension to the seat would basically seal up Rookie of the Year, as it doesn’t seem there are going to be any other rookies in high profile seats next season (unless Hendrick Motorsports makes a surprise pick for the No. 88 Chevrolet).

Briscoe is ready for Cup. He’s got the experience on pavement now. He reminds me of a more reserved and slightly less aggressive Kyle Larson behind the wheel, which may actually be better than getting Larson from a pure driving standpoint; Larson’s high line style won him races but it also bit him in the ass a lot.

What will happen to Matt DiBenedetto after next season?

Matt DiBenedetto had a bittersweet morning.

For IMMEDIATE release. Release it far and wide. Wrote a poem about it. Here ‘hit goes:

On one hand, the Californian was granted one more season with Wood Brothers Racing. On the other hand, however, it was also announced that Austin Cindric would be farmed out to that ride by Team Penske beginning in 2022. Unless WBR were to expand, this means DiBenedetto will be looking for a ride for 2022 and beyond.
It’s becoming clear that due to a multitude of factors, not the least of them being a regressing economy, we’re about to see a big change in silly season.
Gone are the days of huge multi-season contracts. There really aren’t many who are going to be getting them in the future — Kevin Harvick, the Gibbs drivers, Chase Elliott, Joey Logano.  Those are just about the last really untouchable drivers, the guys who are going to get the three- or four-year deals.
Meanwhile, if a driver like DiBenedetto goes on a big run, chances are a big team is going to be able to make a run at them if the sponsor agrees. Brad Keselowski didn’t even take the multi-year contract and just reportedly went with a one-season extension. It’s about to be the late ’90s up in here.
As far as how the No. 21 performs next year, it could go a few ways. Maybe it’s an obvious lame-duck year and it doesn’t perform very well. Maybe the team rallies around DiBenedetto and can get him winning some races. Or maybe Keselowski leaves Penske and it calls an audible, putting Cindric in the No. 2. There’s no good way to predict it right now.
Will the Charlotte Motor Speedway ROVAL become passe?
This weekend will mark the three-year anniversary of the Charlotte Motor Speedway ROVAL events.
The move was to try to shore up interest for a race weekend at Charlotte that was traditionally run on the oval, an event that was flat on TV and in fan interest. The first ROVAL weekend was a big success, with wackiness and a surprise winner in noted road-course expert Ryan Blaney nabbing the win.
Last year’s weekend wasn’t as big, but it still had a pretty decent ending, with Elliott triumphantly driving through the field and winning to advance to the next playoff round.
It’s unclear as to how this weekend’s races will go over. Obviously the attendance will be handicapped due to COVID-19, but how it’s presented on TV will be the key. NBC’s horrible coverage of the Daytona International Speedway road course in August really doesn’t spring confidence that this race will be produced well at all, and even disregarding the TV coverage, that race really wasn’t much to write home about.
With a total of six road-course races on the schedule next season, if this year’s ROVAL weekend fails to live up to the hype and is followed up next year with more of the same, it might be time to rethink the concept.
Running the ROVAL has opened up a number of different ideas NASCAR is starting to implement, such as dirt at Bristol Motor Speedway and more road courses in general. But there’s a chance that this concept has a shelf life, and it may not be a bad idea to rethink these races on the off-chance this weekend doesn’t deliver.

funny how clint bowyer. martin truex and micheal waltrip all tried and failed to fix the outcome of a NASCAR race and none of them were thrown out of NASCAR the way Kyle Larson was for just saying a word no one likes, This right here shows what a giant joke NASCAR is, In NASCAR saying the N-word will get you thrown but fixing a race is OK, and they wonder why fans walk away from NASCAR

Well put. No one likes that word except the NFL evidently.
I’d rather see Kyle come to HMS myself, but can’t argue with the SHR logic. Gene Haas seems to be one of the few remaining willing to blow his own cash self-sponsoring drivers. Plus Tony doesn’t give a rip what the media thinks.

Aric Almirola is extended for one year, so I see this as either hiring Larson this year and Briscoe next, or vice versa. If Stewart wants Larson bad enough, he’ll hold off on Briscoe until after next season when the new car is unveiled.

I think Clint made a wise decision. Going to the booth as the ratings continue to crater is a good career choice. Never was a great driver but a very good driver, and great to listen to on a racecast. Good move Clint.