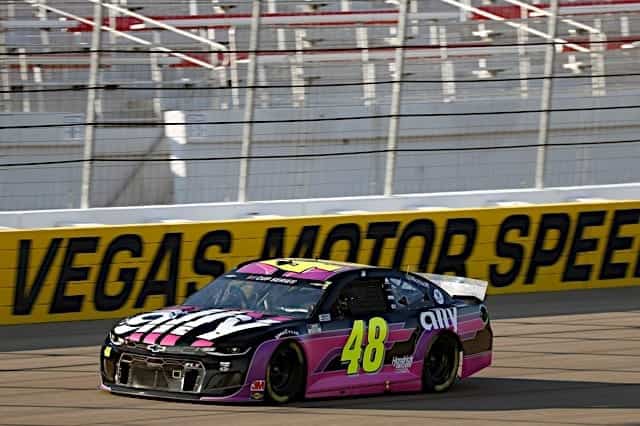 This time of year, the only guarantee that you’re going to get in Las Vegas is hot weather. They got that last weekend. What you also got was strategy and luck playing huge roles. That affects how a race is covered.

Sunday brought 96-degree weather and wind into the equation. It also brought an unexpected circumstance late in the race that jumbled the field. Kurt Busch directly benefited and earned a victory in his 20th full-time season.

Prior to the race, the focus was obviously on the playoffs. Since Las Vegas was the first race of the Round of 12, there wasn’t so much discussion of points, but it was still there. With no practice, it’s legitimately difficult to predict what’s going to happen in the races these days.

Outside of that, the big news of the week is the announcement that Michael Jordan will enter NASCAR as a team owner along with Denny Hamlin. They’ll be fielding a team for Bubba Wallace next year. No number, sponsor or manufacturer was released, but I think we can fill in some blanks on what that might look like next season.

While this will be Jordan’s first time owning a team in NASCAR, he’s not a stranger to motorsports. Previously, Jordan owned a race team that competed in what is now MotoAmerica. Here’s a E:60 clip from 2010 where ESPN’s Hannah Storm talks to Jordan about his love of motorcycles and his team, Michael Jordan Motorsports.

Jordan has previously talked about going to races as a kid growing up in the Carolinas. NBC Sports’ Brad Daugherty, who just so happened to be on-site in Las Vegas Sunday, had a somewhat similar background to Jordan. He narrated a piece about their connections to motorsports during pre-race (note: this actually premiered Saturday prior to the ALSCO 300, but it aired here as well). It does show that Jordan’s interest is not necessarily a lark. He’s more familiar with the sport than you think.

Before we go on, we must reference the fact that Jordan will not be the first black team owner since Wendell Scott in the Cup Series. Daugherty himself is a minority owner of JTG-Daugherty Racing. Thee Dixon owned Mansion Motorsports, which competed part-time in Cup. Readers here might recognize the team best as the team that fielded the No. 85 Ford that Carl Long drove for (Darrell Waltrip had to buy out Long’s seat to race in the 2000 Coca-Cola 600), but the team was active as early as 1990 with Glidden sponsorship and Mike Skinner driving (the rainbow-colored car you might have seen recently is from 1991).

Sam Belnavis formed his own team, BH Motorsports, in 2001 and struggled mightily. Basically, they couldn’t make a race.  He then merged it with Travis Carter Enterprises (which was in need of sponsorship after the KMart bankruptcy and Discover Card choosing to leave after the 2002 season) to form BelCar Racing. This team ran full-time in Cup in 2003 with Todd Bodine driving the No. 54 Ford with National Guard sponsorship.

As a result, you never really heard all that much about him. Kurt was running around 15th for the majority of the race. The No. 1 team’s decision to try to stretch their fuel was an attempt to gamble on heck going down. Sure enough, Jimmie Johnson suffered a right-rear tire failure and brought out the caution. Given the situation, it might have actually benefited Johnson since he stayed in the top 10 despite the failure.

Busch was the highest-placed driver that hadn’t pitted yet. Most of the others that ended up right behind him were a lap down prior to the stops. Basically, this was the best-case scenario for Kurt.

Speaking of Johnson’s failure, there wasn’t a whole of information about what happened there. Despite the track surface being more than 13 years old, tire wear was fairly minimal. You didn’t really hear anything about it all night. I don’t know what the wear looked like or if Johnson ran over something to cause his failure.

For NBCSN, this was pretty far down the list. I have no doubt that they prepared a decent amount of information on nearly everyone, but with limited to near-impossible garage access, it’s hard to gather the information for the broadcasts. Even if they could have unfettered access to the garage, getting that time is highly unlikely because of the decreased crews on-site. Crew chiefs are likely now more hands-on in the garage.

Basically, what I’m saying is that NBCSN really didn’t cover Busch much before the caution on lap 235 put him up front. It forced a scramble. Matt DiBenedetto was in a similar spot. He ended up at the front by not pitting during the lap 235 caution. He had been racing around Busch.

Likely the biggest wreck of the race Sunday night was when Tyler Reddick smacked the wall on lap 160, right before the end of stage two. I had no idea what happened here. The broadcast showed Reddick moving slowly on the backstretch. It was only once Reddick rounded turn 4 and brought his CAT Mining Chevrolet into the pits that it became apparent that he had hit the wall.

Even after reading Reddick’s post-race quotes, I have no idea how it happened. It seems like he just hit the wall. There were no replays of this incident on the broadcast, so I really can’t help you. Not good. I want to be able to help myself here.

Heck, I’m not really sure what caused John Hunter Nemechek’s issues on lap 247 either. The replays that we did get of that missed the start of the incident. Remember that Nemechek was right up there in the hunt at the time. He wasn’t running 25th. He was fourth or fifth.

Overall, the coverage of on-track racing was good at times. The restarts, as usual, were nothing short of a scrum. Plenty of good stuff there. However, you need to be able to provide more outside of that period of time. Here, I found the action a bit lacking at times. There was some discussion on Twitter about one segment of the race where the booth commentated on a couple of laps from Ryan Newman‘s in-car camera. This showed him having quite a handful.

The segment was declared to be nothing more than a sponsored segment from Guaranteed Rate (sponsor of Newman’s car and the in-car camera). I thought that it was a way for viewers to see the other side. Not everyone’s car was on rails. Newman’s clearly was not. Ultimately, he ended up benefiting in the same circumstance as Busch and ended up in the top five. He ended up finishing 15th on a night where he probably should have finished 25th.

Post-race coverage was actually quite substantial. Viewers got a number of post-race interviews and post-race analysis before leaving Las Vegas to air tape-delayed coverage of the Acura Sports Car Challenge at Mid-Ohio.

Sunday’s race was probably the least exciting of the three races in Las Vegas. That wasn’t necessarily NBCSN’s fault. I blame that more on the rules. The fact that the field was all over the track was nice, but it seemed like you just couldn’t pass easily. Hamlin was quite a bit faster than most everyone else and could do it. Everyone else seemed to need help.

There was only so much on-track action for position to go around with the long green-flag runs. I found that this is another one of those events where you really wished that the booth was on-site. I feel like if they were there, they’d be able to point to a few more aspects of the event that would make the broadcast that much more exciting.

That’s all for this week. Next weekend will see NASCAR hold a tripleheader at Talladega Superspeedway. Saturday is a doubleheader for the Gander RV & Outdoors Truck Series and the Xfinity Series, while Cup will race Sunday. Meanwhile, there is a unique weekend at the Indianapolis Motor Speedway on tap. There’s a doubleheader, featuring the INDYCAR Harvest GP for the NTT IndyCar Series in addition to the season finale weekend for SRO America, which will conclude with the inaugural Indianapolis 8 Hours. This is the new American round of the Intercontinental GT Challenge. TV listings are in the TV tab.

We will provide critiques of at least two of the races from Talladega in next week’s edition of Couch Potato Tuesday here on Frontstretch. The Critic’s Annex this week will cover both Friday night’s World of Westgate 200 and Saturday’s ALSCO 300. Next week’s Annex will cover the Harvest GP.

Regarding your observation on not knowing what caused Reddick’s issue, I have noticed similar occurrences ever since NBC took over. I am guessing they are bringing fewer cameras to the track each week. You used to always get a decent replay of any wreck regardless of who it was. I didn’t notice this while FOX was doing the races. Any idea if there are fewer cameras at the track?

The 38 did what he does best…spin out by himself.

There are to many talking heads in the booth and to much time using the in car camera shots.

If winning is the goal of racing why is the 3rd place finisher on the pole. If Covid is the concern time trials could be run by bringing one car (out of the garage) on the track at a time. True champions should have to win from their starting position via time trials our heat race results. This has been the format (until this playoff procedure was developed) since racing began.