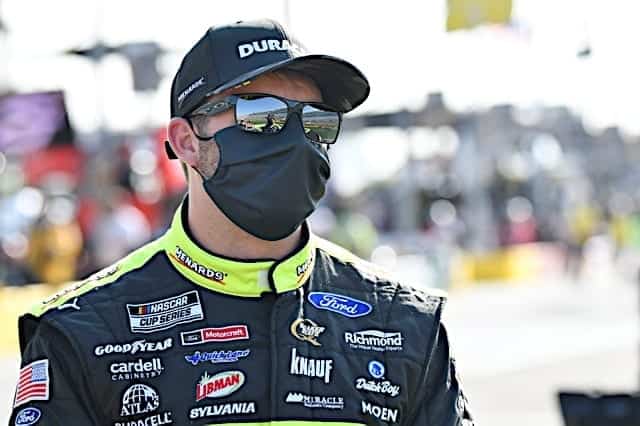 Talladega is the dictionary definition of a wild-card stock car race — just look how many drivers got their first win there. So for those wheelmen currently on the wrong side of the cut line, this weekend offers the best possible chance at booking a spot in the final eight with a victory. Yes, the Roval is also a wild card, but it’s a totally different animal. With that in mind, let’s look at the four drivers beneath the cut line and assess their prospects for this weekend’s 500 miles of white-knuckle high-banked racing this Sunday.

Statistically speaking, Talladega is Kyle’s worst track (with multiple races), as he has an average finish of 20.7. Busch’s lone victory at Talladega came all the way back in 2008, and he finished 19th and 32nd in the previous two races. His last top five came in the first race of 2017, so it’s been a while, an eternity by his own high standards, since he had a good finish at ‘Dega. But this is Kyle Busch. Despite his horrible form in 2020 which has in many ways been strange to watch, you keep expecting him to snap out of it and to go on a spell of winning three of four or something similar. He’ll still be a threat this weekend, no question. And maybe, just maybe, this will be the race he finally gets his elusive win.

Two of Bowyer’s 10 career Cup victories have come at Talladega, but it’s been a while since the last win, with his successes coming in the second race of the 2011 and 2012 seasons, respectively. His last three finishes at the track have been 29th, 25th and 23rd, but in the second race of 2018 he finished second, so it’s not all doom and gloom. Like Busch, Bowyer is on a lengthy winless streak (currently 124 races and counting), but don’t discount the wily veteran on a plate track. Stranger things have most definitely happened.

Consider Almirola strongly for your fantasy lineups this weekend. The Stewart-Haas Racing driver hasn’t finished outside the top 10 at Talladega since the spring of 2016 — a remarkable streak of eight straight races that also encompasses his win in this race in 2018. His only other career victory came in the summer Daytona race in 2014, so clearly plate tracks are his strong suit. His average finish of 14.8 at ‘Dega is his best across any track, so you would have to figure that despite his paltry current points haul, Almirola will be in with a shout on the high banks. One to watch for sure.

And finally Dillon, who had up until Sunday started out the playoffs very well with finishes of second, fourth and 12th before a 32nd-place run at Las Vegas Motor Speedway brought his positive momentum crashing to an abrupt halt. Dillon runs much better at Daytona than he does ‘Dega, unfortunately for him, where he has four finishes of 29th or worse in the last seven races. He did finish sixth in this race last year, but that definitely will not be enough to move the points needle. For Dillon, only a win will do on Sunday, but given his fine form of late I wouldn’t rule it out.

Seven-time Cup champion Jimmie Johnson heading to IndyCar in 2021 (sponsorship permitting) has to be among the best and most surprising storylines in an otherwise insane 2020.

“I know I’m taking a big risk at this point in my career, changing disciplines, but to me, that challenge of starting over and learning something new is super exciting to me,” Johnson said of his 2021 plans to transition to open-wheel racing.

“Let’s not underestimate the challenge here,” noted Dario Franchitti, who made an unsuccessful move the other way in 2008 then returned to win three straight IndyCar titles (2009-2011). “You’ve got to go into these things with a mindset there to try and win. Not necessarily that you’re going to. To win in that first year, it’s going to be tough, but it’s not beyond the realm of possibility for Jimmie to win a race next year. I think his pace is going to surprise people. He’s incredibly talented.”

And if Johnson can’t get back to victory lane in the remaining six races of the season, wouldn’t it be incredible to see him make it all the way back in a different discipline? Either way, like I said, I’m all about this next season — Jimmie’s IndyCar journey will be required viewing.

Just a Matter of Time

It was a frustrating third-place finish for Lewis Hamilton at the 2020 VTB Russian Grand behind teammate Valtteri Bottas, who snagged a second win of the season under somewhat controversial circumstances this past weekend. Hamilton picked up two five-second time penalties for doing two practice starts in an incorrect location prior to the commencement of the race. The penalty served during his pit stop relegated the Brit down to 11th, but the six-time world champion drove all the way back up to a podium finish in third. After a tricky Q2 in qualifying, Hamilton secured a record 96th pole position, and were it not for the penalty would likely have driven off to a record-tying 91st Formula 1 victory. Sunday’s disappointment just delays the inevitable.

The real question is how many can Hamilton win before he hangs up his racing gloves? 100? 110? More? You suspect that the final number, whatever it ends up being, will be viewed in future somewhat similarly to Richard Petty’s 200 Cup victories — an utterly unattainable number.

This column has always celebrated the underdog, and Matty D has long fallen square in that camp. In the end, it was a plucky second-place finish for DiBenedetto, a repeat of his result in the first visit of the season to Las Vegas Motor Speedway and his third top five of the year, equaling his total from 2019. The last time the Cup circus swung through town this season, the date was February 23rd, just weeks before the pandemic lockdown began in what seems now like a totally different world. Strange to think of it now to be honest, given everything that has happened.

For DiBenedetto, this second place wasn’t as crushing as his same finish in last year’s Bristol Night Race, when even race winner Denny Hamlin apologized in his post-race interview. And despite circumstances working out for him with the caution flag at LVMS, it was good to see the Wood Brothers No. 21 car with such good speed at a mile-and-a-half circuit, a point DiBenedetto was quick to make afterwards.

Ahhhh so close! P2 tonight. Team did awesome. Car was charged up and fast! Our time will come ?? pic.twitter.com/keF6oe66Dq

Wouldn’t it be amazing to see Matty D get that long-awaited maiden victory this year to bring up the century milestone for the Wood Brothers alongside his personal landmark? If not this year, I do firmly believe we will see Matty D in victory lane at some point soon, and what a celebration it will be. Few drivers will have deserved it more.

And finally this week, a shout out to the legend that is Mario Andretti. A few years back on a commercial shoot, I had to entertain him one on one for 30 minutes before he was set to begin filming. I had a list of questions as long as my arm, but he was much more interested in asking about me — a topic I tried hard to dissuade! To this day, I consider it the most enjoyable half-hour of my professional career. So it was no surprise to see this Twitter exchange on Monday night:

So I get to help call a race with @MarioAndretti in it in about 70 minutes with @PodiumeSports.

Keep calm. This is not a reason to freak out.

OK, who am I kidding, it totally is! All seriousness, this is pretty badass!

I'm telling myself the same thing….. Keep calm and try not to freak out.

Form is temporary. Class is permanent.

NOT SURE IF ANYONE FOLLOWING HERE WILL CARE BUT F-1’S ONLY EXCITEMENT THIS YEAR HAS BEEN WHEN HAMILTON GETS A WEIRD (ONLY IN F-1) PENALTY AND COMES BACK THROUGH THE FIELD !!