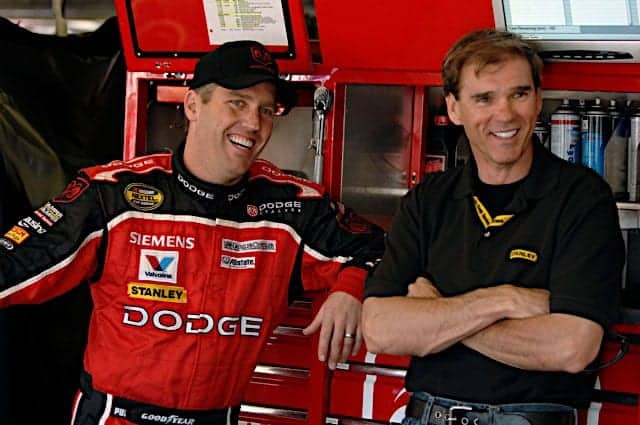 Ever since Tony Stewart and Ray Evernham announced in July that they were starting their own racing series, SRX, a handful of drivers have been campaigning to get in.

“To hear them do that, to me, it opened my eyes,” Mayfield tells Frontstretch. “It really built excitement for me, because I felt like maybe I have a chance to run in that series and go back to doing what I love doing, and that’s running asphalt racing and those style cars. And I was just really excited about them really jumping out there, taking a chance and starting their own series and get TV involved and all that stuff right off the bat.

“I think it could lead into bigger and better things in the future, not just for my sake, but for the sport in general.”

Mayfield’s certainly a talented racer — he won five times in the NASCAR Cup Series. But the reason Mayfield’s interest in the league comes as such a surprise is because Evernham is one of the SRX founders.

Mayfield drove for Evernham Motorsports in the Cup Series from 2002-06, a span that included two wins and two playoff berths in the first two years of the NASCAR playoffs — and this accomplishment was back when the playoff field only consisted of 10 drivers. But the team struggled in 2006, and Mayfield was released midway into the season. Mayfield then filed a lawsuit against Evernham, claiming he was an absentee manager because he was spending all his time with Evernham developmental driver Erin Crocker, who has been married to Evernham since 2009 and has a daughter with him.

Shortly after Mayfield’s and Evernham’s falling out, Evernham Motorsports was sold to George Gillett Jr. Mayfield was banned from NASCAR for violating its list of banned substances the following year, a claim Mayfield fought and denies to this day.

MASSIE: DOES EVERYONE OWE JEREMY MAYFIELD AN APOLOGY? HE SAYS….

So when Mayfield showed interest in joining SRX, it seemed unlikely due to the bad blood he had with Evernham. One fan on Twitter claimed hell would have to freeze over for those two to reunite, to which he received this reply:

“[Evernham and I patched things up] pretty much a long time ago,” Mayfield says. “He and I talked recently a few times. And the past is the past, and we’re gonna move forward. Ray and I have always been great friends, and we had our differences or whatever there in the middle. We’ve put that behind us, and we’ve kind of grown up now and realized what I did wrong and could’ve been better at. And I think he has, too.

“Like I said, that’s all behind us, and I’m looking forward to hopefully a good future and hopefully being in that series.”

Is this really you ? Text me

With their relationship mended, the biggest obstacle to Mayfield being selected to SRX has been removed. Even so, he hasn’t received an offer from the series yet.

“They’re still in the process of figuring out who’s gonna drive the cars,” he says. “They got a lot of stuff going on in a short amount of time to get it all done. They’ve been slowly picking drivers, and we’re definitely on the list. Hopefully we get chosen and be a part of it.

“I’m just really excited about, if I can make that happen, to go back racing again. That’d really be great for us and myself. Ray and I talked several times lately, and I feel good about it. We’ll just see what the process is and who they pick as drivers. Hopefully, we’ll get enough support and fans and everything else that’ll help us out and be able to help get us voted in there.”

So far, SRX has seven of its 12 cars filled, with the confirmed drivers being Tony Stewart, Tony Kanaan, Paul Tracy, Bobby Labonte, Helio Castroneves, Willy T. Ribbs and Mark Webber. Evernham said on Dale Jr. Download that all 12 spots might not have the same driver for every race of the six-race schedule and that some entries might have a rotation. So there’s likely more than five spots left.

Mayfield, 51, falls right in the middle of the age range of the seven announced drivers, with Tracy being the same age as him and Labonte and Ribbs being older. The other four are all in their 40s. With Evernham building all 12 cars equally, Mayfield says he wants the opportunity to showcase his driving talent against a star-studded cast.

“I’ve ran against most of them before, Tony and Bobby Labonte, and ran right side-by-side with them,” Mayfield says. “My problem with the NASCAR thing wasn’t my driving, it was pretty much all the other crap outside of racing that got me. As far as the driving part, I think any of those guys would know that as far as stacking up, I’ll be right there with them.”

One thing going against Mayfield is that he hasn’t competed in a race on a national stage since 2009. That doesn’t necessarily mean he’s past his prime or has let himself go physically, though.

“I feel like I’m in better shape now than I’ve ever been,” Mayfield says. “I feel like mentally, I’m sharper. Oh, yeah, I feel great. I have never felt better. I don’t feel like I’ve lost my edge.”

Mayfield stays in shape by running and working on his dirt late model, which he’s been racing throughout the Carolinas and Georgia. He’s in the midst of building himself an obstacle course, including a tire course and a hill and bars for climbing, on his property to use for his workouts.

“It’s just different things like that we’re trying to basically get in shape,” Mayfield says. “And it’s better than working out, really.”

In addition to racing on dirt, Mayfield now uses iRacing to hone his racing skills. He had dabbled with the service before but started using it frequently after seeing Cup drivers compete in the eNASCAR Pro Invitational Series earlier this year.

“I’m on there quite a bit running cars,” Mayfield says. “I know that doesn’t mean a lot to a lot of people, but I think it really helps your hand-eye coordination. And just racing in general is great on there. I think it really keeps you sharp. And then racing my dirt car, obviously, that’s kind of relieved some of the stress of not being able to race.”

Even if Mayfield isn’t selected for SRX and all his recent efforts are for naught, he still plans to be around motorsports in some capacity.

“I’m just going to continue on with my dirt car and try to build a dirt team into something,” Mayfield says. “And maybe later on down the road a few years from now, put a driver in it and just continue racing.

“Doing what I’ve been doing and what I love to do. I’ll always be involved in racing no matter what. It’s something that I’ll just be able to be a part of somewhere down the line. At what level, I’m not sure. But racing’s kind of all I’ve ever done, all I know and all I know how to do, so I’ll definitely have to do something involved in racing.”

Didn’t ESPN try this with Jaguars back 20 years ago?

Go to Racing Reference and look up Ribbs. He’s a legend in his own mind. He was a winner in Trans—Am which is nothing. His nick name at Indy was chicken Ribbs. He doesn’t belong in this deal. Either does Mayfield. The others have major championships in their resumes. You want drivers that will bring in fans like Jeff Gordon, Montoya, Dale Jr, etc.
I hope the series is successful.

Ribbs couldn’t be more overrated if he tried. However, I think the likes of Dan Gurney, Tommy Kendall, David Pearson and Ron Fellows would be surprised to find that Trans Am was “nothing.”

Yeah I agree with Tony.

I would never say Trans Am is nothing. Especially during the 80s. There were tremendous car counts and plenty of competition. Oh well. I don’t even know if I should have replied. Don’t want to open a can of worms haha

I used to enjoy the IROC races back in the day, so I’m looking forward to this new SRX series.

As for Mayfield and Evernham mending the fence, I’m all for it.

I hope guys like Biffle, Hornaday and Mark Martin get rides in SRX, too.

Mayfield is good driver. He should get a spot. Like see Martin in it as well. Maybe dale Jr too.

Jeremy Mayfield is extreme talented and belongs in any series, especially this new series! Hope he’s chosen- you doubters will see what he’s made of!!