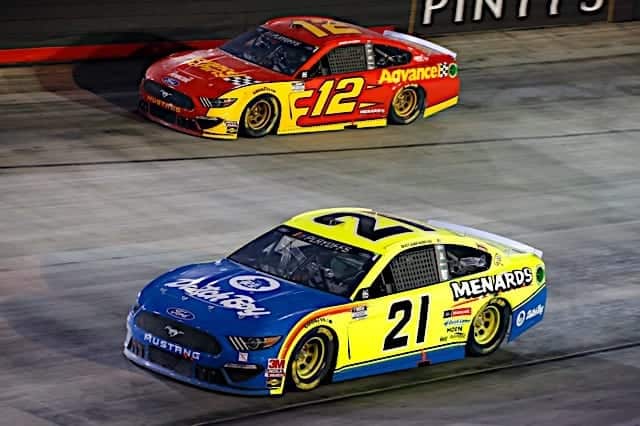 The Round of 16 is over, and four drivers have been eliminated from the 2020 NASCAR Cup Series playoffs.

All four faced their shares of trouble throughout some portion of the race, and some more severe than others.

Byron was the first playoff driver to know for certain his postseason run was over. The Daytona winner just three weeks ago slammed into the back of Christopher Bell, both forced to check up behind a slowing Joey Gase, Byron said.

The damage to Byron’s No. 24 Chevrolet was too severe and unable to continue, the 2018 Rookie of the Year finished 38th was eliminated from the playoffs.

“I think the 51 car, a black and green car, checked up in the middle of the straightaway and as fast as we were running the top, I was riding behind the 95 and I had literally nowhere to go,” Byron said. “You can’t stop in the middle of the straightaway when everybody is so committed to the top like that. Just ridiculous that that’s what takes us out. I thought honestly we had a shot to run top five or seven. The car was really, really good. We just needed a couple good pit stops. We were running probably ninth or 10th there. Just super disappointing. I’ve got to go back and watch that because that was kind of ridiculous.

“Just a terrible situation, but not really sure why that happened or what really transpired for him [Gase] to stop like that. But, go back on SMT like we can now and look at what happened and move on.”

Byron was the only driver entering Bristol on the bubble to earn stage points in stage one, finishing eighth and earning three points. He believed he needed better track position, but the car became too free after an adjustment was made to help Byron turn better.

The team never got a chance to fix its mistake and instead found itself in the garage with a caved-in nose.

Still, the 22-year-old said the first-round exit won’t diminish what he deems has been a solid year with three top fives and 10 top 10s.

“Yeah, I think it’s been a great season,” Byron said. “I think that we’ve performed well. I think we would have liked to perform better, based on how we ended last year. But we got a win and I feel like really the last five or six weeks, we’ve had all top-10 runs, besides Richmond, which is our worst track. I don’t know, hopefully we continue being fast the next few weeks.”

Unfortunately for this year’s Rookie of the Year, Custer was a non-factor on Saturday night.

Despite previously strong runs at Bristol in the Xfinity and Gander RV & Outdoors Truck series, Custer could not find speed or success in an attempt to advance to the Round of 12. Instead, he found front-end damage which hurt his No. 41 Ford’s potential en route to a 22nd-place finish.

“That pretty much did us in for the night,” Custer said of the damage. “I think we got our lap back at that point, and we were just in line with a bunch of guys on the restart. [Drivers] got together and everybody stacked up and everybody just hit each other and we all got our nose knocked in. That’s just classic Bristol I guess. Just part of running back there. We had to run better.”

Custer, who earned his first career win at Kentucky Speedway in July, blamed himself for part of the poor showing.

“I was probably a little bit off,” said Custer, who has two Truck victories at the half-mile bullring. “It’s just been hard to get the feel that I wanted here. I haven’t struggled this much at Bristol before, but it’s definitely been tough in a Cup car trying to figure out.”

DiBenedetto entered Saturday’s race in must-win mode, 25 points beneath the cut line, but the No. 21 car never showed winning speed.

Instead, DiBenedetto was forced to pit under green-flag conditions during stage two for a loose wheel, costing the Wood Brothers Racing team three laps. The team fought its way back to seventh and sat in the free pass position “for what felt like four hours,” DiBenedetto said, but never found the caution it was looking for.

DiBenedetto wound up finding debris from Bell’s Toyota in the closing stages of the race, cutting his right-rear tire and effectively ending any outside hope he had of advancing to the next round of the playoffs by cementing a 19th-place finish at Bristol.

“It’s disappointing,” DiBenedetto said. “It sucks to be knocked out of the playoffs in the first round, but you’ve got to be perfect in these playoffs. I’m glad we made them. We have a lot of things to build on now.”

Perhaps ironic is that the No. 95 car of Bell is the same team with which DiBenedetto finished second in the Bristol night race in 2019, landing him a ride in the iconic No. 21 Ford this season. Bristol has been the site of DiBenedetto’s high highs – his first career top 10 (sixth) with BK Racing in 2016 and his near-win last summer – and low lows – not sealing the victory last season and an early playoff exit this year.

Still, his love for the track remains.

“This place has impacted my entire career,” DiBenedetto said. “This place was heavily responsible or partially responsible for me having the privilege to drive this [No.] 21 car this year too. So there’s a lot that I’m really appreciative for and this place is really close to my heart.”

Perhaps most perplexing on Saturday night was Ryan Blaney, a driver who has previously shown he can dominate around the high banks of Bristol.

His roller coaster night started with top-10 speed, but as the night wore on, the car became unbearably tight, dropping Blaney outside the top 20. The No. 12 team rallied back to the top 10 before the tight condition set in again and Blaney finished 13th, two laps down.

Entering the contest 27 points beneath the cut line, the Team Penske program knew a win was necessary if it was going to advance.

“I was running down fourth and fifth, and then just like a light switch, got really tight on exit again and couldn’t run the bottom,” Blaney said. “Was just super tight on exit and where my strengths were up top, they went away after maybe 80, 90 laps. That definitely stinks. We were kind of back and forth on it, but a shame we didn’t transfer.”

Blaney suffered setbacks prior to Bristol that necessitated his must-win scenario at Bristol. Darlington and Richmond are two of Blaney’s worst tracks, and the results this year did him no favors.

A 10-point penalty for a pre-race weight violation put the team in a hole before the first round began at Darlington on Sept. 6, and that hole was made deeper with a 24th-place result. Richmond hardly went better after finishing 19th.

His early exit is a surprise based on both overall speed this season as well as past Bristol success, having led 60 laps or more in four of his last five starts there. That success was absent on Saturday.

“I mean I’m upset about it. You don’t want to be knocked out with seven races to go and not be able to run for a championship,” Blaney said. “Obviously I’m not very excited about that, but there was a lot of things we could’ve cleaned up as a group together, myself included, and we just didn’t perform. We didn’t perform in the first round like we needed to to transfer, and that’s just something you’ll have. We just needed to step up and we had too many issues.”

Now Blaney’s focus sits on winning again before the season ends and claiming fifth in points at the end of the race in Phoenix in November.

“There’s still a goal that you’re trying to go to,” Blaney said. “Yeah, it sucks that you’re not being able to run for it [the title], but I’m just disappointed. Not really disappointed – it’s hard to put into words. I wish we all had three better races as a team. I know this team could have great races and it was a shame we missed that a little bit.”

With the exception of Blaney, these are drivers who were lucky to make the Chase (it’ not a “playoff”) this year. Blaney is definitely the surprise here, just as Austin Dillon is the surprise driver advancing to the round of 12. For the most part, the round of 16 is an exercise in sweeping out the also-rans. Do we really need 16 drivers in the Chase? No.

Good Point. But NASCAR needs a safety net for some of their favorites to make the playoffs. That’s why there is 16, IMO