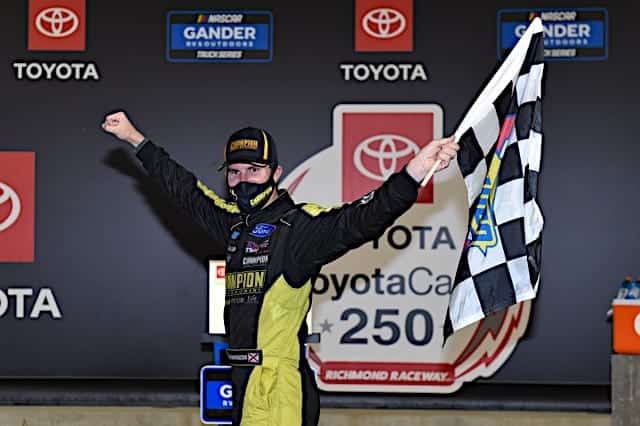 In a Nutshell: Grant Enfinger scored his third win of the 2020 season when he raced down and passed teammate Matt Crafton in the closing laps of the ToyotaCare 250 at Richmond Raceway Thursday night (Sept. 10).

“This win gives us a lot of momentum heading into the playoffs,” Enfinger said. “We needed it. It’s been a rough past month and a half to two months. We just been a little off on speed but haven’t been terrible. It felt great to not only find some speed tonight but to have ThorSport Racing (finish) one-two-three is also awesome.”

Enfinger recovered from going a lap down earlier in the race after contact with teammate Ben Rhodes caused a significant tire rub. Rhodes ended up third, while Zane Smith and Sheldon Creed rounded out the top-five finishers.

When the checkered flag flew over Richmond Thursday night, the 2020 Truck Series playoff field was set. But before the race ended, Austin Hill clinched the regular season championship and the 15 bonus points that come along with it.

Creed, with three victories and five stage wins, will lead the way headed into the playoffs. Just four points back, Zane Smith and Hill are tied. Enfinger and Brett Moffitt round out the top five.

Todd Gilliland and Tyler Ankrum, who had to wait until the checkered flag flew at Richmond to know whether they would race for a championship this season, sit ninth and 10th, respectively. The pair, separated by a single point, are currently below the cut line for the Round of 8 but have three races to make their way into the top eight.

Meanwhile, Derek Kraus, who entered Richmond with a realistic shot at making the playoffs, struggled throughout.

“We kind of knew right away. The first two laps it took off fine. I was able to roll the top really well,” Kraus explained. “I think I was passing for fourth or something, and then all of a sudden, it just started laying on the splitter and hitting the race track really hard. It kind of threw out the parachute after that, and just kind of went to the back. It was just on the splitter really hard, and I couldn’t do anything about it.

“I hope something broke in the front to cause it to do what it was doing. It was on the splitter the whole race, nothing they did kept it off of it or made it any better. We are thinking something broke. My NAPA Toyota guys never gave up on it. They tried their best to do what they could do, but something was probably broke.”

He ended up 23rd and missed the playoff field by 13 points.

The story of Johnny Sauter‘s 2020 is almost comical at this point… Three of his teammates are will race for the championship, while he’s gone nowhere most of the season.

Within the first 10 laps, he was forced down pit road for an unscheduled pit stop for what he thought was a tire going down.

His #NASCARPlayoffs hopes take a hit early with an unscheduled stop. pic.twitter.com/DQJg9YseBa

The problems didn’t improve with the new right side tires either as Sauter struggled throughout the race. Needless to say, he wasn’t at all pleased with the truck or the problems he faced.

In a win or go home situation, @JohnnySauter makes a trip to pit road (unscheduled) on Lap 8.

"We got something broke. Something's wrong," he radios.

"It's plowing. I don't know if you had a unicorn stopper in the motherf*cker. WASTE OF MY F*CK. WHAT THE F*CK."

When the checkered flag flew, three of his teammates celebrated a 1-2-3 finish while Sauter ended up 27th, eight laps down. It’s his third straight finish outside the top 25, and barring some major improvements over the next seven races, 2020 will go down as Sauter’s worst since he started racing in the series full time in 2009.

On pit road, Trevor Bayne says he’ll be in the 45-Truck next week in Bristol. He adds they’re working on plans to be in the truck for the rest of the season.

Number of Rookies in Race: 6

Number of Rookies finishing in the Top 10: 0

Man nothin hurts more than having a set of tires left in the pits @RichmondRaceway luckily got a stage win, wish a caution woulda fallen think we woulda had a shot at the win. Still had fun appreciate everyone on my 21 @GMSRacingLLC team for all hard work.

Wasn’t a perfect night by any means, finished p18. We’ll debrief and get better, but we’re locked in for the playoffs now. Some good tracks coming up for the @safelite #18, time to be perfect.

Long night. Didn’t make the playoffs but we still have 7 more chances to get in victory lane!??

(1/2) Very, very disappointing race – P26. We were running P6 during the first stage. Between the 1st and 2nd stage, during the first pit stop, a miscommunication cost us a lot. The Toyota Tundra got off the jack too quickly and I left on 3 wheels. pic.twitter.com/nGVt5CHRtw

(2/2)By the time we tried to fix the damage, we were already 3 laps down. We won't be part of the playoffs this year, but we haven't said our last word yet ?? Can’t thank enough my partners @Mobil1 and @canac_ca ? pic.twitter.com/ZLkmeOlViJ

Points Update: The playoff field is set and 10 drivers will fight through Bristol Motor Speedway, Las Vegas Motor Speedway and Talladega Superspeedway to make the Round of 8.

Who will be left standing at the end of the #NASCARPlayoffs? pic.twitter.com/4PF2fbM5B4

Derek Kraus leads the rest of the field and is 64 markers ahead of fellow rookie Raphael Lessard. Stewart Friesen sits 13th, followed by Tanner Gray, and Johnny Sauter rounds out the top 15 in the standings.

The @NASCAR_Trucks playoff field is SET and “The Finger” emerged with his third ? of the season ??

(Also, we promote healthy and safe mask wearing on this account ?) pic.twitter.com/uTKqTBEs1I

Can’t explain how good this one feels. Great speed all night, and it worked out! Thank you to everyone @ThorSportRacing for all of the hard work and an awesome 1-2-3 finish! @ChampionPowerEQ @CurbRecords @FordPerformance @FarmPaint https://t.co/BNUNIvhkj7

We didn’t make the wrong call tonight. Cautions just didn’t fall our way. My @TendaHorse @Ford #F150 drove amazing and I’m super proud of all my guys…. we just needed a little luck. I don’t think I’ve ever been so mad to finish 3rd. Congrats @GrantEnfinger @ThorSportRacing!

I didn’t think the race would run that long with-out a caution in the final stage.

Thanks to @Select_Blinds and @Fireade2K for all the support. We will try and do it again soon pic.twitter.com/vRsCnYnx88

Tough night for us but proud of what we’ve done to be leading play offs and congrats to all the guys @GMSRacingLLC to have all 4 trucks in the play offs!! Let’s get it!

We made the playoffs!! So proud of my @Team_FRM @Brettstevens399 @SpeedcoPM @BlacksTire team!! Not the finish we wanted tonight but we met our main goal?? focus forward and clean up some mistakes we can be in the fight!! pic.twitter.com/03Z7CtSYmV

Up Next: The Truck Series heads to Bristol Motor Speedway next Thursday night for the first race in the Round of 10. Coverage for the UNOH 200 presented by Ohio Logistics begins at 7:30 p.m. ET on FOX Sports 1; the race can also be heard on your local MRN affiliate or SiriusXM NASCAR Channel 90.

BORING RACE !! WHERE IS THE TV SCHEDULE FOR THE WEEKEND ??