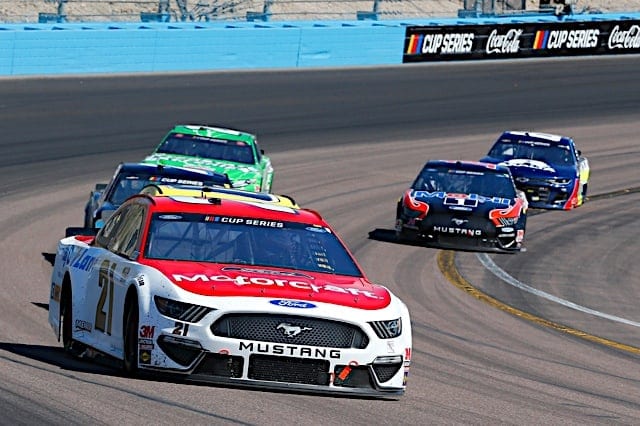 Austin Dillon and Richard Childress Racing teammate Tyler Reddick dueled for the win at Texas Motor Speedway in mid-July, with the No. 3 car coming out on top to secure a playoff spot. The pair were on the playoff bubble at the time, Dillon in 16th and barely in the playoffs. In the current non-playoff standings, Dillon ranks 18th.

His only other wins came at Charlotte Motor Speedway in 2017, on fuel mileage, and Daytona International Speedway in 2018, where he was involved in a controversial last-lap incident. Despite the win this year, Dillon has managed just two top-five and seven top-10 finishes, with three finishes outside the top 20 in the seven starts since Texas (missed the Daytona road course after testing positive for COVID-19).

Dillon will more than likely be in the cellar of the playoffs when the checkered flag flies at Bristol Motor Speedway and the Round of 12 is set.

At first glance, Rookie of the Year Cole Custer’s season stats seem to stack up the best against fellow rookies Reddick, Christopher Bell and John Hunter Nemechek, but Reddick edges him in most categories outside of top-five finishes and wins.

That’s not to say Custer’s win at Kentucky Speedway was a fluke. The No. 41 was fast for the majority of the race, Custer was in the right place at the right time, got a huge push from Matt DiBenedetto toward the front and took advantage of infighting among the three leaders to lead the last lap and win the race.

However, it doesn’t seem to be in the cards for Custer to move past the first round of the playoffs. He does have the win, which puts him at a few-point advantage over fellow postseason contenders Kyle Busch, Kurt Busch, Clint Bowyer and DiBenedetto, but his starts and finishes average right around 20th.

Of course, Custer inherited the NASCAR Xfinity Series win at Darlington Raceway last year when winner Denny Hamlin was disqualified, so running well at that track this weekend isn’t out of the question. He also won Richmond Raceway outright last in Spring 2019. The NASCAR Cup Series tour hasn’t visited Richmond yet this season, so it’s entirely possible that Custer could score an upset there.

Rookie jitters might also factor into his performance, though, so it might be a year or two before Custer makes a run at a championship.

It’s been a mildly uneventful, even subpar, 2020 for Bowyer. Outside of his lone season with HScott Motorsports in 2016, Bowyer looks to be on track to score his only single-digit top-10 season during his full-time Cup career. He ran well last week at Daytona and was in the top five on the final lap, only to get tagged and slam the wall. He finished 19th.

Bowyer racked up at least 13 top-10 finishes in each of his first three seasons with Stewart-Haas Racing, winning two races in 2018. But for him, as well as the rest of us, 2020 has not been kind. He’s only crashed out of one race, but the speed just hasn’t been there for the No. 14 team, especially late in races, and it wouldn’t be a surprise for that trend to continue into the playoffs.

DiBenedetto came oh-so-close to a playoff berth last year while driving for Leavine Family Racing, leading the way for 93 laps at Bristol before Hamlin passed him for the win late in the race.

Guido then made the move to Wood Brothers Racing for 2020, where he’s on pace to have his best season yet, and he survived most of the carnage last week at Daytona to squeak into the playoffs. It’s DiBenedetto’s first time in NASCAR’s postseason, and he also sits 14th in the non-playoff standings, a major improvement with his new team.

DiBenedetto is the most likely of these top four to move on. However, I expect the No. 21 to miss the round of 12 at crunch time simply due to the level of competition in the 2020 playoffs. Eleven of the 16 drivers have won races, and consistency will lift several of those around DiBenedetto above him.

Predictions-wise, the four aforementioned drivers are my picks for opening-round eliminations. If I had to swap one out, though, it would be for William Byron. While the third-year driver managed to score his first win last week at Daytona and was already inside the cutline before the race, he rode that line much of the season and is currently on pace to more-or-less match his top-five and top-10 stats from 2019. It’ll likely be a race between Byron and DiBenedetto for the final transfer spot to the second round of the playoffs, but given Byron’s recent results, the advantage should go to the No. 24.

Don’t count out some of the other drivers who rank lower in the standings, though. The Busch brothers and Aric Almirola could all suffer crashes or failures and be on the outside, looking in when the Bristol race concludes. Besides, it’s the playoffs! Anything can – and will – happen in the nine races leading up to the championship finale at Phoenix Raceway, and a wild throwback night in South Carolina is the perfect way to kick things off.

For what it’s worth, my championship pick is Hamlin.

Bring on the playoffs.

Most likely to crash that party: Bowman and/or Bowyer

The SHR Squad is a joke except for Harvick. Almirola earned a lot of his stage points by getting insanely good qualifying draws…there was a stretch where he was awarded the pole 6-8 times!?