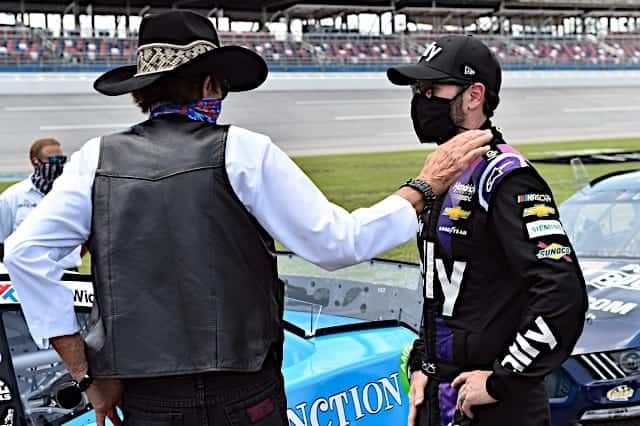 Did You Notice? … Jimmie Johnson’s 2020 playoff miss means he’ll officially end his NASCAR Cup Series career without an eighth championship. The 44-year-old Johnson, retiring at the end of the season, will remain tied with Dale Earnhardt Sr. and Richard Petty at seven.

This trio of NASCAR Hall of Famers had one thing in common: no one expected their run of titles to stop. Each appeared to be well on their way to continued success at the time they won their last title.

Petty won his seventh Cup championship in 1979, outracing young upstart Darrell Waltrip in the season finale at Ontario Motor Speedway. It ended an impressive decade of success in the 1970s: five titles, two more runner-up finishes and just one year (1978) where he wound up outside the top five in points. A 1979 switch away from Dodge to General Motors products appeared to revitalize the King and set him up for future success.

Earnhardt won his seventh title by a country mile in 1994, clinching with two races left in the season. His final margin over Mark Martin was a then-impressive 444 points; Earnhardt set a career high with 25 top-10 finishes. There was nothing to suggest the Intimidator would stop running the competition into the ground.

Johnson won his seventh title with some luck in 2016, the beneficiary of a late caution between Carl Edwards and Joey Logano at Homestead-Miami Speedway. Still, that gave him an important first title in the new 16-driver, elimination-style format, proof the No. 48 team could compete under such conditions. It was a seventh title in 11 seasons for a driver who racked up 62 wins during that stretch.

But a closer look at how each career ended shows us how success can turn fleeting for even the best of athletes. This trio had a variety of common problems that hurt them during their final years.

Crew chief changes. In early 1981, Petty lost longtime head wrench Dale Inman to what became J.D. Stacy’s No. 2 team. Inman was the man responsible for the King’s seven championships. Several impressive names followed, from Robin Pemberton (future NASCAR Vice President), Buddy Parrott (Rusty Wallace’s mastermind in the early 1990s) and Mike Beam (who later crew chiefed for Junior Johnson). None of them were able to match the magic between Petty and Inman.

Earnhardt had a similar problem after Jeff Gordon’s rise to the championship in 1995. Andy Petree, who helped lead Earnhardt to his sixth and seventh titles, left for Leo Jackson’s No. 33. It’s a team Petree would eventually purchase and own himself, winning several races as a car owner in the early 2000s.

Like with Petty, a legendary crew chief (Larry McReynolds) was eventually paired up with Earnhardt. The duo earned the Intimidator’s long-awaited Daytona 500 victory in 1998 but endured a winless season to get there. Eventually, Kevin Hamlin seemed to reignite the much-needed chemistry between driver and crew chief, nudging Earnhardt back to a runner-up finish in points in 2000. Sadly, Earnhardt was killed in the 2001 Daytona 500 before they could accomplish their goal of title No. 8.

And then there’s Johnson. After his first winless season in 2018, he and crew chief Chad Knaus ended their 16-year partnership. Replacement Kevin Meendering lasted less than half a season. Cliff Daniels has shown promise at times, but Johnson remains winless without Knaus at the helm 61 races in.

Competition changes. In 1981, NASCAR downsized from the big, boxy models to smaller, wheel-based racecars. Five inches were removed between the front and rear wheels, introducing new manufacturers to the sport while making the cars difficult to drive. Petty never adapted well to the changes, winning just eight more times in a dozen years driving a new model.

In Earnhardt’s case, it wasn’t so much the cars as the competition around him. By 1995, multi-car teams were in position to take over the sport. Hendrick Motorsports earned their first title with Gordon, Roush Racing was starting to succeed with the two-car system and Robert Yates Racing announced plans to expand.

Richard Childress Racing tried to follow suit, adding rookie Mike Skinner in 1997, but the lag time appeared to set them behind. By the end of 1996, Earnhardt was the only driver in the top five in points (fourth) not part of a multi-car program. To this day, RCR has never really risen back above HMS on the Chevrolet totem pole.

In Johnson’s case, a new handling package introduced in 2019 slowed the cars down significantly, dramatically changing the way these cars drive while putting greater emphasis on track position, restarts and engineering. At the same time, Chevrolet appeared to fall behind its manufacturing counterparts in some of these areas. Since the start of 2018, Chevy has won just 16 times in 98 Cup races (16.3%) despite fielding the most cars on the grid.

Age. Petty was 42 when he won his last title. Earnhardt was 43 and Johnson was 41. At the time, it felt like there were plenty of good years ahead for all three. Mark Martin’s success in the modern era (along with Harry Gant before him) along with Kevin Harvick’s surge in 2020 shows older can sometimes mean better.

But as I wrote the other day about Harvick’s success, that’s often the exception, not the rule. Jeff Gordon retired from full-time racing at 44; Tony Stewart retired at 45. For every 40-something that achieved great success in this sport, there’s another two-to-three who saw their careers meet Father Time. Could you have ever imagined that Johnson, who had won three races by June 2017, would be riding a three-year winless streak into September 2020?

These men will remain legends of the sport, first ballot NASCAR Hall of Famers who made a longtime impact in their generation. But with Johnson’s failed bid for eight, you would think their record is in position to stand for years to come. No other active driver currently has more than two titles (Kyle Busch). Harvick, currently the hottest driver in the sport, won’t race long enough full-time to have a chance at seven. And with the sport’s 16-driver elimination format … it’s unlikely anyone will get on a run like Johnson’s five straight titles anytime soon. Too much unpredictability.

It’s a realization that will get lost with so much else going on in 2020. But it’s amazing how quickly Johnson’s drive for eight failed – and how long it’ll take before we’ll see that record challenged.

Three incredible driver. I have always felt that Earnhardt was a bit ahead of the other, because he won his titles with 3 different crew chiefs. Petty had Inman, Johnson had Knaus, but Earnhardt managed to do ti with Richert, Shelmerdine, and Petrie. It was more than just the perfect 1 on 1 matchup.

i wonder how petty felt when johnson won the 7th. he hated that dale was tied with him for champoinships. it could just be that he didn’t quite like earnhardt.

i honestly feel that we will never see a 7 time championship again. the racing has changed and how points are accumulated has changed.

Luck is always a factor for any team to win in any sport but with the current format luck is more important than ever in winning the championship. For that reason I wouldn’t say a 7 time champ will never happen (never is a long time), but it will be damn near improbable. BUT, with the way NASCAR changes the format so often, maybe it won’t be as long as we all think.