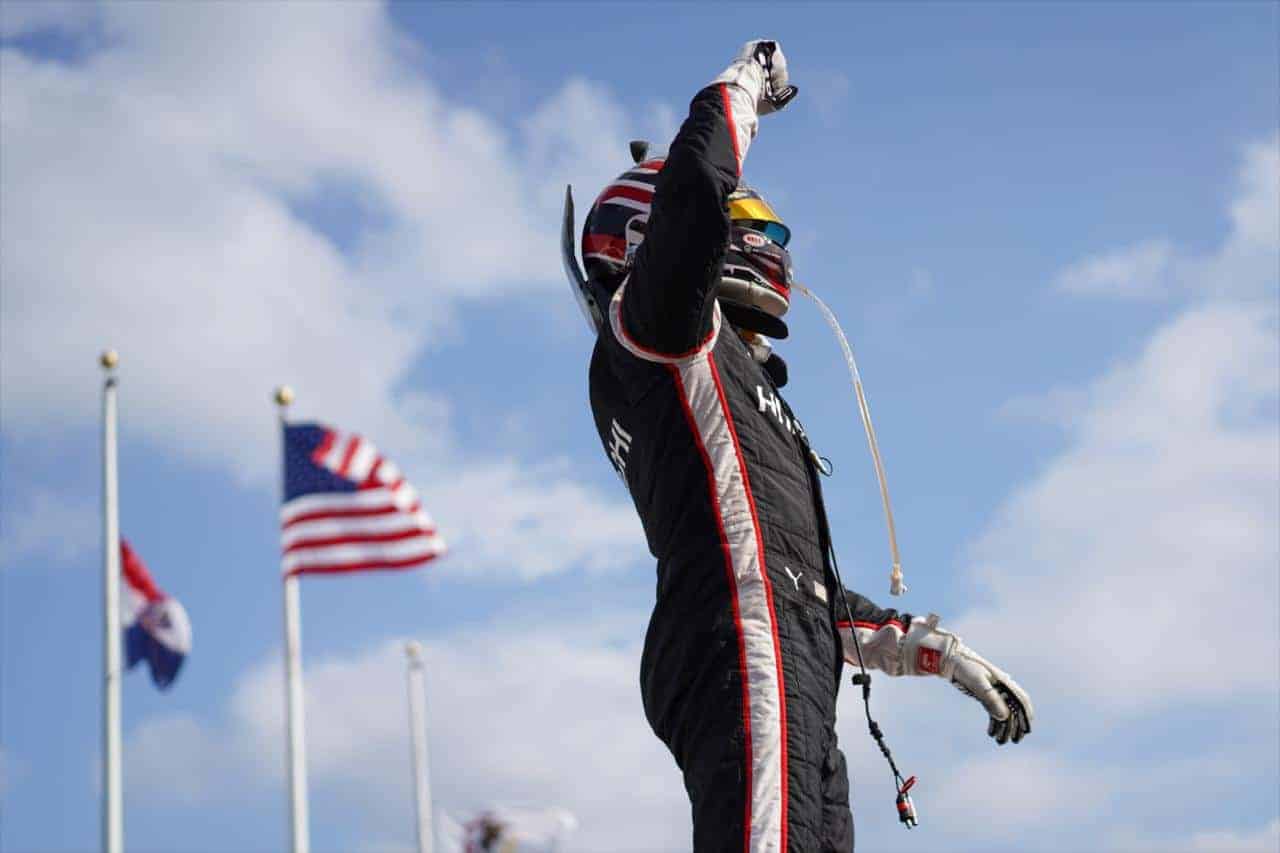 The 2020 Bommarito Automotive Group 500 Race 2 at World Wide Technology Raceway at Gateway on Sunday (Aug. 30) proved to be far cleaner and more consistent than its Saturday precessor—until the last 10 laps.

Team Penske’s Josef Newgarden took home the win under a yellow flag for his second victory of the 2020 IndyCar season, becoming the first repeat winner in Gateway’s IndyCar history.

“This was all a pit stop victory right here for me,” Newgarden said after the race. “We got pretty dicey with Will [Power] and Pato [O’Ward] on track, but my guys have been amazing in the pits. They’ve put me in position every time. We won that in the pit stops…Really proud of my team. I didn’t win it, they won it.”

The start of the Bommarito Automotive Group 500’s second event was delayed after a vehicle spilled oil on the track during the pre-race parade. With the first two laps run under yellow, Takuma Sato led the field to green determined to make up for Saturday’s missed win. Second-place starter Newgarden slipped in behind him on a track covered in oil dry.

A solid battle progressed between Ryan Hunter-Reay and Santino Ferrucci, with the two drivers swapping 10th place. Simon Pagenaud‘s car looked ill by the first 10 laps, which boded poorly for his already shaky championship hopes. Cars went four wide on the start, but the field soon strung out until lapped traffic became a factor.

Hunter-Reay was the first driver to take advantage of an early pit stop and signaled many drivers to follow. It was there that some of the biggest passing came, with Power and Rinus Veekay reaping the benefits. Sato, meanwhile, stayed out longer in the hope that his strategy from the previous day would pay off again. Unfortunately, it wasn’t to be—Sato lost seven spots, and O’Ward inherited the lead.

The second round of pit stops came around the halfway mark of the 2020 Bommarito Automotive Group 500 Race 2. There were a wide variety of pit stop strategies that kept competitors on their toes and made it difficult to predict who would ultimately prevail.

Marcus Ericsson was the first driver to have mechanical problems. He pitted on lap 131 with a rear wing, the entire upright of which was loose. The Swedish driver was 10th at the time of the stop, which made for a frustrating result after a strong run.

Scott Dixon made his final stop with just a quarter of the race to go, signaling the rest of the drivers to go. Newgarden and O’Ward, the two drivers who filtered out into the lead, raced off pit road to secure the head of the field. Power had a rough stop; he was stuck behind Ed Carpenter as he pulled into the pit lane and lost his lead.

The wildest action came with less than 40 laps to go, when Veekay flew past Colton Herta and clipped the American driver in the process. Herta managed to hold onto his car but drifted up on the track, almost crashing into the wall after getting loose in the remaining oil dry. He managed to hold it steady, but he wasn’t happy.

O’Ward found himself in a similar position to the previous day’s race, following behind the leader and hoping to find an opportunity to make a move as the leader approached lapped traffic. Pagenaud and Alexander Rossi, two cars about to be lapped, made contact, leaving the former to slip back down the standings. Pagenaud was then involved in a three-wide battle between Power and Marco Andretti.

With four laps to go, Sato made contact with the wall and brought out the first yellow flag of the day. The race finished under yellow, as there wasn’t enough time to stack the cars up for a green flag run to the finish. Newgarden took the checkered flag. The defending series champion is currently settled into second place in the overall IndyCar championship standings, and still has confidence that he can catch Dixon for a third potential title.

“We can’t give up on [the championship],” Newgarden said. “Yesterday was a pretty big blow. We’ve been bitten by bad luck this year. The yellows have gone against us, but what can you do? Sometimes it goes your way, and sometimes it doesn’t. Maybe this will be a little kicker for the end of the season for us.”

Second-place finisher O’Ward was happy with his result despite missing out on his first IndyCar victory yet again.

“Our objective was to come in and try to score two podiums, and we did that,” O’Ward said. “It would have been great to score a win, but we were so close. Right out of the gates we were super competitive. We’re knocking on the door, man. We’re going to keep pushing.

“It’d be great to say that I [could have passed Newgarden], but I was really struggling,” he admitted. “When I got the countdown to 10 laps to go, I was pushing, pushing, pushing to get in distance to strike, but I had nothing for him.”

Power, capturing third place, praised his No. 12 car but remained frustrated about his season.

“We had a very good car. I felt we had the car to win,” Power said. “Obviously it’s a traffic game. I’ve gotta thank all the guys. The car was really strong today, we had great stops, a great car. The strategy didn’t work out at the end, but still very happy to get a podium.

“We certainly have had a lot of potential this year. Very strange year. But I feel very fortunate that I get to drive the Verizon car, that I get to do this, that we get to have the fans here. Obviously we’d love to win, but it wasn’t our day.”

The Bommarito Automotive Group 500 Race 2 top five was completed by Veekay and Dixon.

Of course it had to end with the yellow/checkered flag when there is only 4-5 laps left. Remember when they tried to start a race coming down to the checkered flag from a late caution flag? I think Mario and JR were racing in Nazareth or SanAir.
Diffey is an idiot, PT & Bell knew there wouldn’t be a restart.