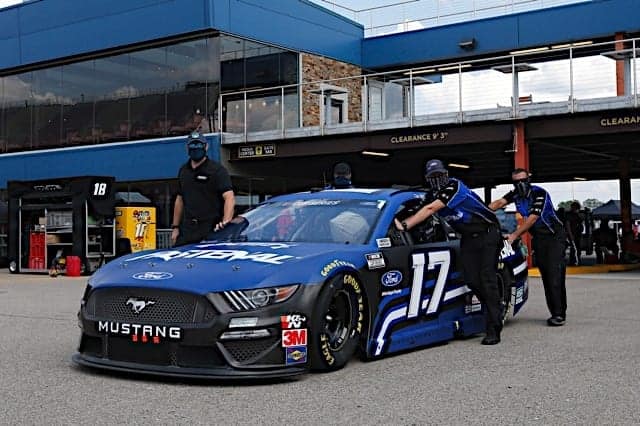 The rigors of running two races in the same series within 24 hours have forced multiple cars to the rear to begin Sunday’s Consumers Energy 400 at Michigan International Speedway.

By virtue of finishing 20th in Saturday’s FireKeepers Casino 400, Roush Fenway Racing’s Chris Buescher earned the pole for the Consumers Energy 400. However, the team has chosen to go to a backup car for the race. As a result, Buescher will drop to the rear of the field during the pace laps. He won’t be alone back there.

Both Tyler Reddick and Aric Almirola, who were scheduled to start third and fifth, respectively, will drop back as well due to backup cars. This means that Hendrick Motorsports’ William Byron, who finished 14th on Saturday, will lead the field to green.

In addition, Brennan Poole will start from the rear of the field due to a engine change. The Tommy Baldwin Racing No. 7 car will also start from the rear for two different reasons. Josh Bilicki, who led laps and finished 17th Saturday at Road America, replaces Joey Gase. In addition, the team changed the transmission that failed on Saturday.

Finally, Reed Sorenson and Daniel Suarez both failed pre-race inspection twice Sunday morning. This brings the number of cars having to drop to the rear up to 13, a full one-third of the field.

While Custer and Dillon have already won their way into the NASCAR playoffs, starting from the rear ups the ante for the rest of the group as either a win or being in the top 16 of the points standings after Aug. 29 at Daytona clinches a playoff spot.

Coverage of Sunday’s Consumers Energy 400 will start with Countdown to Green at 4 p.m. on NBCSN.  Race coverage follows at 4:30 p.m.

Let’s see how many cautions the 38 brings out today. Is there a record for how many consecutive events a driver causes a caution? He’s got to have it.