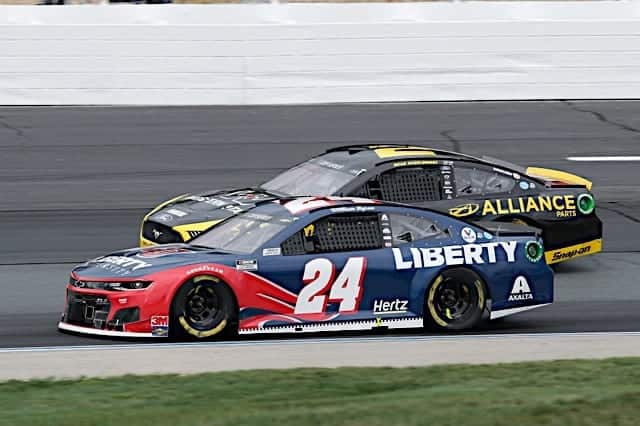 William Byron is back in familiar territory.  One year ago, 20 races into the regular season, he was 12th in overall points and fighting to solidify a spot in the NASCAR Cup Series playoffs.  Holding a 61-point advantage over the cutline leaving New Hampshire Motor Speedway, Byron continued his rebound from a rough start to the season and put the No. 24 inside the playoffs in his second year.

In 2020, Byron is once again part of the playoff picture leaving New Hampshire.  But this time, his path toward the postseason is a bit more difficult.  Instead of being 12th on the playoff grid, he’s 16th, the last position left that would get him in.  He only has a 15-point cushion on the drivers currently outside the playoffs.  Much like 2019, the No. 24 team had a rough start to the season and has been trying to dig out of a hole ever since.  With drivers like Tyler Reddick, Jimmie Johnson and Erik Jones not far behind, Byron will need another late summer rally to make sure he is not left out of the playoffs.

It is a little surprising that Byron is fighting for his postseason life this late in the regular season, especially when you consider the trajectory of his career.  In just a few years, he went from a virtual unknown to the new driver of Hendrick Motorsports’ famed No. 24.  Along the way, he spent one year in the Truck Series and won seven races in 23 starts.  Byron then moved to the Xfinity Series in 2017 and captured the championship as a 19-year-old rookie.  Rick Hendrick promptly called him up to the Cup Series, effectively taking Kasey Kahne’s spot on the roster.  Hendrick appeared to have found his next superstar.

Two and a half years later, Byron’s progress has slowed considerably.  His rookie season was a major struggle, although that wasn’t a shock given Byron’s age, lack of experience and difficulties that the Hendrick organization faced in 2018 as a whole.  The 2019 season figured to be better, especially when Byron got seven-time championship crew chief Chad Knaus moved over to his team.  Indeed, Byron made good on those predictions.  Along with making the playoffs, he led more laps and earned his first top fives and more top 10s than the previous year.  As a result, many people believed he would take at least another small step forward in 2020, maybe more.

But so far, this year has not had many positives for Byron.  If anything, the No. 24 team has regressed.  Byron is one of only four drivers in the top 25 in points without a top-five finish.  The only race where he has led more than 15 laps was at Kansas Speedway, where he took the lead on a pit strategy call.  Other times, when Byron has had a fast car, wrecks have taken him out of contention.  Not all of them have been his fault, but they have contributed to a trend this year of the No. 24 team struggling to close races.

At Kansas, Byron couldn’t hang with the leaders late in the race and barely held on for a top-10 finish.  The end of his race at New Hampshire was similar, with Byron falling out of the top 10 in the closing laps. Byron’s real highlights of 2020 have been his three victories in the iRacing events during the COVID-19 break and winning one of the Daytona 500 qualifying races.  But aside from 10 extra points for the qualifying race win (points that may prove quite valuable in a tight playoff race), none of that has translated into success for Byron on the track this season.

It’s worth wondering if the expectations placed on Byron at the beginning of the 2018 season were a little too high.  There is no doubt that he adapted quickly to both Trucks and Xfinity cars, but the Cup Series has a much steeper learning curve for new drivers.  All of those who have won a Cup Series title under the elimination-style playoff format have been in at least their 10th full-time season when they won the championship.  Even the four title contenders heading into the last race each season are usually veteran performers.

Meanwhile, drivers like Byron who get promoted to the Cup Series in their late teens or early 20s usually do not run well right away.  The recent youth movement over the last five years or so has brought talent like Chase Elliott, Ryan Blaney, Erik Jones and Alex Bowman into high-profile rides.  It took over a year for each of them to win, and only Elliott has won more than five races so far.

Before all of those drivers, Joey Logano was the go-to example of a young racer thrown into the Cup Series too early and with too much hype.  All it took was time and a change of scenery for Logano to eventually live up to that hype… an adjustment that happened in his fifth full-time season.

So Byron is not alone in his struggles, though with an important difference: he still lacks a points-paying win.  Everyone mentioned above has won at least twice.  Rookie Cole Custer got his first Cup Series win a few weeks ago and Reddick, another freshman, was close at Texas.  Even Christopher Bell, who has largely struggled this year, has one top five to his name while Byron has none.  After two and a half years in the Cup Series, Byron shouldn’t look further away from winning than several drivers who just got there.

Maybe Byron just needs more time.  Maybe he needs a new crew or a whole new team, like Logano.  Or maybe he goes to Michigan International Speedway next week and wins his first Cup Series race and locks himself into the playoffs.  Byron, once a surefire bet to be a star, has become an enigma.  The youngster ascended NASCAR’s ranks so quickly, adapting to every circumstance with ease.

But as he nears his 100th start, his Cup Series career does not reflect that same level of steady improvement.  The remainder of the 2020 season will hopefully provide more clues as to whether Byron has hit his ceiling or can still climb higher within Hendrick Motorsports.

Byron, Bowman, Johnson and recently even Elliot have struggled to finish in the top ten so it is not surprising that the least experienced driver in this group is not having much success. This of course translates to the crew chiefs as well. Chad Knaus seemed to have lost his magic touch and Alan Gustafson has won races but never seriously threatened to win a championship. The other two crew chiefs have been even less successful.. The year started out in a promising fashion but has quickly fallen into mediocrity. It appears that it is time for a shake up or maybe a switch to a manufacturer that hasnt lost it enthusiasm for racing at an elite level. Of course this will never happen . Rick will remain loyal to Chevrolet as well he should they have enjoyed much success together