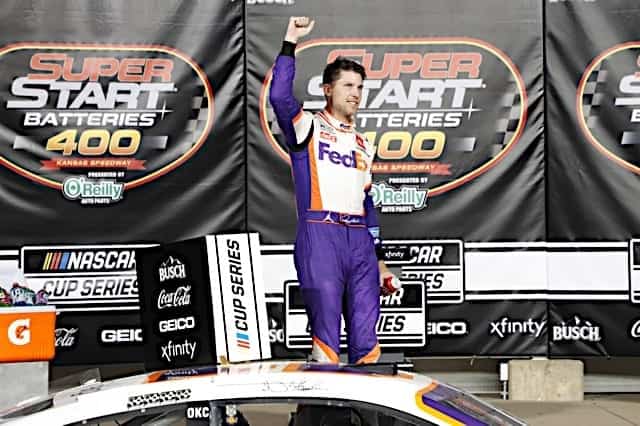 Make it two in a row at Kansas Speedway for Denny Hamlin. Hamlin won the Super Start Batteries 400 in the NASCAR Cup Series for his fifth victory of 2020, the most of any driver this season.

Did Hamlin have the best car all night? No. He had a good car, and on the final restart, he was able to capitalize on a bad restart for the leaders and run down Kevin Harvick on the last run to take the checkers as Harvick faded.

This is the first season in his career during which Hamlin has bounced back in a big way after having title hopes dashed in the final race. He’s been the top man at Joe Gibbs Racing, thriving with no practice or qualifying when his teammates have faltered. Is this the year Hamlin shakes the no-title mantle?

This has been a good year for emerging young talent, with one of the best rookie battles we’ve seen in years, but another young gun was impressive on Thursday night as William Byron gambled on a late caution, staying out to take the lead, and then showing real strength when Brad Keselowski wrested it away. Byron ran Keselowski back down to retake the lead on older tires under green. That was possible in this race, and that’s an even bigger positive as Byron’s impressive driving was. Byron faded on the last run but still scored a top 10, finishing 10th.

After a violent crash, there’s a moment that seems endless, waiting for a sign that the driver is more or less OK. Ryan Newman’s crash in the Daytona 500, and the following, interminable wait for word is still fresh enough that you want to see that sign right away.

This week, Ryan Preece took a nasty, twisting hit on the inside wall after Christopher Bell slid up the track across Newman’s hood, and the pair cut down, sending Preece sliding to the inside. The impact was so violent that Preece’s No. 37 came off the ground.

It was welcome relief when Preece spoke to his team on the radio and then climbed from the car. Angry? Even better. Even with the safety innovations on the cars today, a crash like Preece’s where the driver walks away is a bullet dodged.

Polesitter Kevin Harvick came out of seemingly nowhere to take the lead on the final restart, but just like in the opening laps of the race, the No. 4 couldn’t make it stick, and he fell back as Hamlin, Keselowski and Martin Truex Jr. heated up. He finished fourth, hardly a bad finish. But is his luster fading at exactly the wrong time?

Last Sunday’s winner Austin Dillon didn’t have the same mojo under the lights at Kansas. He was running mid-pack when Joey Logano’s tire went down just after a restart; the No. 3 became collateral damage, and Dillon’s night was essentially over in 27th as he limped home 16 laps down.

Reigning Cup champion Kyle Busch finally ended his drought – that is, in the playoff point category. He won the first stage, getting his first stage win and first playoff point of 2020. But a cut tire and a brush with the wall in the final stage meant an unscheduled stop, and Busch’s car was not the same after the incident, leaving him still searching for his first win of 2020 and 11th in the running order.

For the second week in a row, contact and crashes dictated a large part of the outcome of the race. Throw tires in there, too, as they were the cause of a lot of the incidents. Call it bad luck for some, but enough of it (Jimmie Johnson, I’m looking at you) will end any playoff hopes or (yeah, you, Ryan Blaney) momentum a driver has going in.

Every position in every race matters (a win in March counts as much toward a playoff spot as one in August), but at this point in the season, it doesn’t matter if the mistake is theirs or someone else’s. They all matter, and the teams that avoid making them and racing around them have the advantage entering the fall season.

With just seven races until the playoffs begin, it’s crunch time. The potential field at this point can be divided into three categories: teams with multiple wins looking to carry momentum into the first round, middle-of-the-road teams who are probably safely in on points or who have one win but need a hot streak to be title contenders, and the ones trying to either hang onto a spot on points or squeeze in.

How will that dictate the next several races? The teams on solid ground can experiment a little. They won’t see any of the same tracks in the playoffs, but they can still glean useful information. They’ll be racing to win and keep the momentum but also to find a playoff edge. That could mean a race or two with lightning speed and a couple searching.

The mid-level teams need momentum, but they also need consistency. Too many mistakes could still cost winless teams a spot, and consistency entering the postseason goes a long way in advancing.

The teams on the bubble have to be in attack mode, because every position matters, and a bad finish can spell disaster, so look for this group to be the most aggressive for the next few weeks.

How… many different winners will we see this year?

We’ve already seen 10 different winners in 2020 through 18 races. That’s a solid ratio, but realistically, how many more might there be?

Actually, it could be quite a few.

Expect Kyle Busch to see a win before the season is out. Beyond him, there’s a passel of drivers who have looked like a win is a possibility: Kurt Busch, Aric Almirola, Matt DiBenedetto, Tyler Reddick, Clint Bowyer, Johnson, maybe Byron, all of these drivers are capable of winning.

That doesn’t mean they all will win a race, but another five or six winners is plausible, and probably four is likely. The more different drivers who are competitive, the better it is for the sport as a whole, and on that front, 2020 has been a pretty good year.

My wife and I were knocked speechless when Preece slammed into the inside wall. We keep talking about Preece’s bad fortunate, but his walking away from that horrific wreck shows that his luck may be bad, but he was still blessed with good fortune when it really mattered..

It was almost as bad as Mikey at Bristol.

I remember that one vividly. It was during practice or qualifying I think.

I remember Danica having a few crashes with that much force and speed after being punted on the backstretch. Actually moving the steering column and wheel towards the roof.

Here’s the video of Mikey’s crash.

That hit reminded me of Jeff Gordon’s crash in Las Vegas in 2008, before the Safer Barrier was installed on the inside wall.