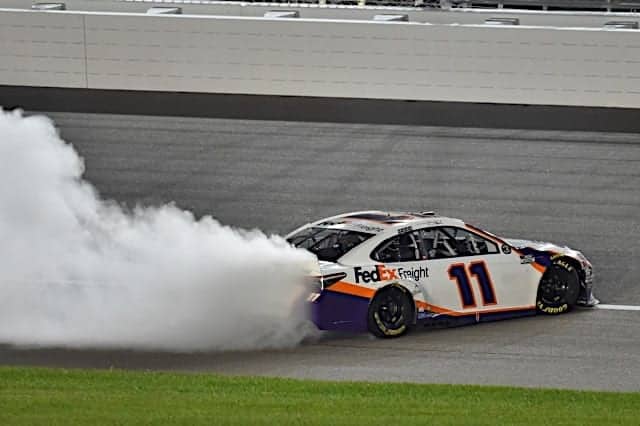 “I don’t know if we had the best car but we definitely had a top-three car,” Hamlin said in victory lane. “Just went and got it there at the end. I saw the No. 4 [Kevin Harvick] was getting loose. Usually when you’re running loose you’re not able to run up high. It’s a benefit for us to get that momentum going. The pit crew did an amazing job getting us out in front of everyone else who took four tires.

“We’ve had a rough three weeks. This team is really hitting on all cylinders right now.”

Hamlin leads the Cup Series with five wins this season, and he has referred to his No. 11 team as a dream team.

“We can win on any given week,” he said with a smile. “That’s something that’s really hard to come by, so that’s good to have at short tracks, intermediates.”

He passed Harvick on lap 255 and held off hard-charging Brad Keselowski to win by 0.510 seconds. Martin Truex Jr., who arguably had the fastest car in the final laps but not enough time, finished third. Harvick and Erik Jones finished fourth and fifth, respectively.

“We were pretty equal. He was just really strong on the restarts,” Keselowski said. “He and the [Joe] Gibbs [Racing] cars got about a car length ahead of everyone on the restarts, and they did a great job taking advantage of it. Even on the race track, little behind on the restarts.”

Despite the runner-up finish, Keselowski noted his No. 2 team enjoyed a good run at Kansas.

“This was our best mile-and-a-half, we’ve been really consistent,” he said. “We weren’t our best at Texas [Motor Speedway], but this was good — leading stages, leading laps, winning a stage, just one spot short of the win.”

Keselowski won the second stage after Kyle Busch won the first stage, earning his first playoff point of this season.

Once the green flag flew to begin the final stage, cautions came aplenty. On lap 172, Matt Kenseth got loose racing alongside Ryan Preece. Kenseth’s No. 42 Chip Ganassi Racing Chevrolet got sideways and made significant contact with Bubba Wallace. The damage to the right-front suspension was terminal, ending Wallace’s race.

On the ensuing restart, Joey Logano, who led the first 27 laps only to lose that track position due to an uncontrolled tire penalty, blew a left-front tire. The subsequent stack up led to damaged racecars of Matt DiBenedetto, Jimmie Johnson, Austin Dillon and Harvick.

When the race restarted, Christopher Bell came up in front of Ryan Newman. There wasn’t enough room, the two made contact and in the process sent Preece for a wild ride. Fortunately, Preece walked away from his destroyed No. 37 JTG Daugherty Racing Chevrolet.

"I'm alright. Just ready for this year to turn around."

Great to hear from @RyanPreece_ after this hard crash. #NASCAR pic.twitter.com/ENOT6b6Diw

ALL WE DO IS WIN!