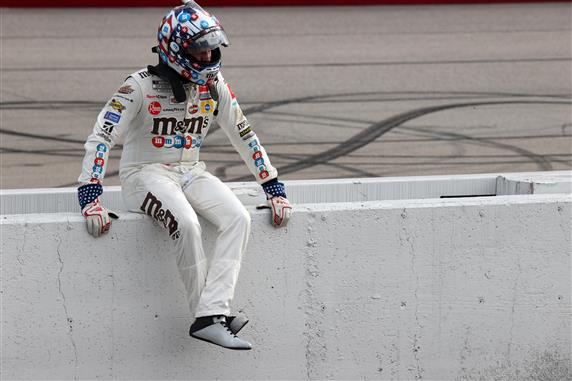 Kyle Busch might just be NASCAR’s polarizing driver. Much like many talented drivers with big personalities, fans either love or hate him. There is no denying, however, that Busch is one of the most talented drivers in the sport today and is a first ballot Hall of Famer.

He’s won over 200 races in his NASCAR career, but in Cup races this season, things have not gone as planned. After 18 races, Busch has zero wins and no stage points. It’s a stark contrast from the first 18 races of 2019 when Busch took the championship. Not since Dale Earnhardt in 1981 has the defending champion run a full season and gone without a victory.

2020 has been the wildest year we’ve ever seen in the sport. Between doubleheader weekends, weeknight races and no practice or qualifying, this year has been unlike any other. For Busch, though, the lack of practice has admittedly been a major issue.

With NASCAR’s announcement on Tuesday that practice and qualifying will be gone for the rest of the year, that led us to ask: Will Kyle Busch win a race in 2020? Clayton Caldwell and Vito Pugliese give their thoughts.

The biggest storyline in 2020 NASCAR season may be the fact that the defending Cup Series champion has yet to win a race. Kyle Busch, arguably the sport’s most talented and successful driver is having an interesting 2020 season, one that I think won’t change much as the season rolls along.

Busch has been very open about the fact he feels his team needs practice to perform their best, pointing it out several times. Well, not to be the bearer of bad news, but practice isn’t coming back anytime soon.

On Tuesday, NASCAR announced that for the rest of the 2020 season there will be no practice and qualifying. Without practice and a chance to improve their car during a race weekend, Busch and crew chief Adam Stevens need to rely on data from their simulators and their engineers to attempt creating the premier setup for Busch.

NEWS: NASCAR to continue without practice or qualifying for the rest of the 2020 season.

The feel Busch has for the car and the way a track changes from one race to another can be hard for the team to figure out without practice. For example, the series is scheduled to run Phoenix in November. The track will change a lot after the summer sun beats on that track during the time in-between races. What worked in March may not work in November. But instead of firsthand experience, teams have to make an educated guess and hope the car is perfect on the first try.

The biggest concern with this for this No. 18 team to me is their lack of speed so far in 2020 compared to 2019. After 18 races in 2019, Busch had 25 playoff points. This year, he has none. After 18 races in 2019, Busch had four wins and led 769 laps. This year, he has yet to visit victory lane and the laps led has dwindled to 150. A hundred of those laps came at Bristol, a short track that is really unlike any other track we see on the circuit. At the mile-and-a-half tracks, where NASCAR runs the majority of their races, the No. 18 team just doesn’t have the speed to win.

Finding that speed is going to be hard this season without the benefit of practice and qualifying. There’s nothing better than the data you gather at the track. You can try to simulate the data all you want, but the on-track time is essential.

I am not sure Busch’s problems can be solved without additional track time. There may have to be some internal changes done to the team to help with that, whether that’s bringing on additional engineering help or relying on a teammate’s notes to build better racecars.

Busch historically prefers a looser setup than others drivers, though, so matching his teammate’s setups may not work very well.

In the end, I feel like the No. 18 team is in a tough spot. They are behind, and the changes they need to make may be something they cannot fix without practice sessions. Busch has gone 16 consecutive seasons with a victory, and I believe this is the year that streak comes to an end.

A Winless Season for KFB? NFW.

If Kyle Busch is going to go winless in 2020, that would either mean A. the season has been cancelled prematurely because of a second COVID-19 wave that shuts everything down again, or B. he is no longer driving the No. 18 car in the Cup Series.

I am cautiously optimistic that neither of those is going to happen. Cautiously.

Let’s go back to 2015, the last time everyone was fretting about Kyle Busch being in danger of missing the playoffs and not having won – albeit the result of injuries sustained in an Xfinity Series wreck at Daytona to start the season. After being granted an exception, Busch was under the gun to win to get in, and fast. What happened?

He won in his fifth start following his return at Sonoma in May, right after finishing dead last the week before when he crashed at Michigan. After a 17th at Daytona, he then won three races in a row. Finding himself in the championship final four, he did win one more race … let’s see where was that again – oh that’s right, Homestead. And with that, meet your 2015 Champion, Kyle Busch.

This season, everything has been turned upside down. There’s no practice, we’re racing two-to-three times a week the last few months to get caught back up and some teams have responded better than others. Case in point: Joe Gibbs Racing drivers Denny Hamlin and Martin Truex Jr. have won a combined four races since the series returned in May.

On Sunday at Texas Motor Speedway, Busch was involved in an incident on the front stretch which saw him jump across the infield access road, and then complete an excavation job through Eddie Gossage’s lawn with the front splitter. Surely, he was done after that maneuver, right?

On the final restart, Busch found himself lined up in row two, in position to take advantage of a slip up from either Austin Dillon or Dillon’s rookie teammate Tyler Reddick. While Dillon was able to get out front and in clean air, Busch’s mangled nose wasn’t going to be very effective on the 1.5-mile intermediate, and he hung on for fourth place.

Was it a win? No, but I think that rally and comeback after the damage and air the No. 18 caught in the wreck is something that the team and driver can rally around – a defining moment for a team that could propel them to a title at the end of the year.

Busch’s position in the standings is still relatively safe – 93 playoff points to the good – which means that he just needs to take advantage of the upcoming top 10 opportunities at Kansas, Michigan, and Daytona. The Daytona Road Course race is the only real wildcard I see coming up, but nobody has a notebook on it, and if we’re relying on pure driving talent to figure it out, is there anyone else you’d bank on?

Once the playoffs start however, things are likely to change. Darlington, Richmond and Bristol are in the first round of eliminations, and Busch has a history of winning at these tracks. This is when you will see the No. 18 of old return, and these inconsistent runs  due to lack of practice or contact will become a thing of the past. If you were going to wager 100 of your hard-earned dollars on Kyle Busch winning – or not winning – a race in the next three months, would you really, with any confidence and lack of reservation, bet against him?

I’ll take it another step further. After rattling off a few wins come playoff time when it really matters, I would Sharpie him in as a final four championship contender for Phoenix as well.

Kyle not winning a race this year is something I will not believe possible until I see it. I will love it if it happens but I would not bet a nickel that it will. Every week that he doesn’t win in Cup just makes all those truck and Xfinity wins more pathetic.

if he doesn’t i would not want to be his crew chief or anyone on his crew. or especially any reporter that has the gall to ask him “kyle when are you going to win again?”

I’m sure there will be a caution near the end of an event that will give Baby Busch the chance to lead the last few laps.

Love me some KFB! Pencil him in to the Final Four again.