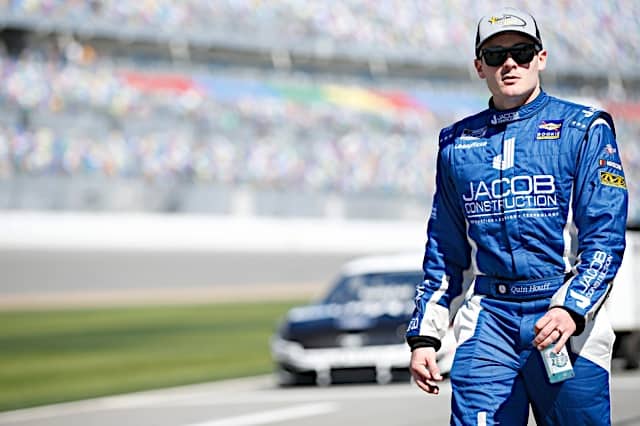 On Sunday, Quin Houff made an abrupt move that impacted the outcome of a NASCAR Cup Series race for several drivers. It’s time for NASCAR to make an abrupt move to ensure that someone like him can’t do it again.

With any sport, the expectation is that those who compete in its highest level are among the most skilled at it. For NASCAR, that is where the blessing of inclusion becomes a curse. Racing, particularly NASCAR, has always been the sport of the everyman. It is true that even at a grassroots level, it can get pricey. But the only requirement has really ever been money. There aren’t many sports that can offer the same type of open door. You can’t just join an NFL roster because you walked in with a check from a large corporation.

Years ago, this was a non-issue. Companies that bankrolled race teams were more attached to the actual team than a specific driver. That enabled the team to hire the wheelman (or woman) they believed was most suited for the ride. Generally speaking, the goal was a balance of skill, experience and brand. Hire the person who could wheel the car and had demonstrated said ability to wheel — and it never hurt if they looked good on a cereal box or a case of motor oil.

Now that the responsibility for financing has fallen to the driver, the one with the biggest wallet gets their name above the window. Even worse optics is the fact that many of these young drivers are backed by a company in which the driver has a family member in a position of influence. This brings about the cries from fans accusing drivers of racing with “Daddy’s money.”

Houff is just the latest example of a disastrous watering down of the Cup field, a trend that has made a mockery of the phrase “40 best stock car drivers on the planet.” It’s not the 40 best. It’s the 40 most fiscally sound options, and everyone knows it. So drop the charade, NASCAR.

Now comes another opportunity for NASCAR to step up to the plate and take the right side of a decisive debate. Great strides have been taken in the name of progress lately, so why not continue the full-fledged remodel? I see no reason that a late-model standout shouldn’t have a chance to race in a Truck or Xfinity series event. But the NASCAR Cup Series ought to be treated as the premiership that it is. There has to be a more stringent prerequisite for participating at the top level of stock car racing.

There are a few ways NASCAR could go with this, but the obvious one is a certain number of starts in NXS, Trucks, or a combination of the two. A total of 30 career starts in one series or both would be a great place to begin. There are a number of different formulas that could be put together to determine eligibility. What I do know is that this system we have now of permitting the most financially enhanced drivers to race isn’t working for anyone. Even young racers like Houff don’t benefit from this arrangement, as they are thrown to the wolves, taking the green in a situation that they aren’t prepared for with little hope of succeeding.

Personally, I’d like to see it taken a step further: winners only. Make it mean something again to be in a Cup race. Television announcers like to tout the fact that race winners have qualified for the All-Star Race, as if the latter is the bigger prize. Wouldn’t it be great if a driver picked up a victory in Trucks or Xfinity, only to be reminded as they are celebrating that they’re now eligible to race in the highest division?

To be fair, the crash Sunday was Houff’s fault. His presence in the race was not. He, like all other drivers, was presented with the stipulations that must be met to race, and he met them. But the stipulations cannot be almost exclusively monetary in the way that they are now.

I can name better than 10 current drivers who are a lock to race in Cup at some point based solely on the likelihood that they will have the necessary funding. There are some people with offices in NASCAR headquarters who should be embarrassed by that. Qualifying for a NASCAR Cup Series race should be an achievement beyond simply determining starting positions. It needs to signify that the participants have earned their place with something that doesn’t have a dollar sign in front of it.

Amen. I could name names and many could. And it infuriates me to no end what happened to Matt Dibenedetto at Leavine. But that was made right by the Wood Brothers. This is in the spotlight and NASCAR needs to act.

Hmmm. does anybody remember Steven Wallace? This is a nuttin’burger, and nothing new.

I think you missed an important point. In most cases the choice isn’t about putting a person in a car who brings money or one who has experience. It is what her we field a car, or not. Big difference. Even the big money teams will not field a car without outside money. As far as experience goes look at the names of experienced drivers who have failed in NASCAR: Danica Patrick, Dario Franchitti, Scott Pruitt, let’s take a look at former Busch, now Xfinity, champions that failed in Cup: Larry Pearson, David Green, Steve Grissom etc. So Houff made a mistake. I’ve seen seven time Jimmie make several mistakes the last two years. Point being they all make mistakes.

Another point..Why haven’t series champions like Matt Craftin, Justin Allgaier, Ron Hornaday and otheres been moved up the latter? Look at Bubba Wallace.. did well in trucks not so well in Xfinity.

Like the old adage “ money talks and bs walks”. NASCAR is no different then any other Motorsport. If they stop ride buying you’ll see fields shrink. Take Jack Roush for example. Had five teams at one time or Richard Chilldress, you think he doesn’t want Ty in one of his cars?

Money is nothing new in NOOSECAR. Its always been that way to a point. However in these times a driver having a pocket full of money is a must. Sponsors aren’t willing to write the big check anymore. Its really a shame that there are much better drivers than Houff sitting on the sidelines because the the money and he gets to race simply because he is buying his ride so to speak. But then as long as NOOSECAR wants to make every thing look good with a most a full field every week this is now the norm and not the exception. IMHO they could cut down to about 30 starters every week and not lose anything. NOOSECAR is dying and issues like this just speed it along. Smoke and Everingham are working on a new prime time series that will syphon more fans away that is not a bad thing.

To be fair, a driving who has a lot of talent and promise is probably not taking a ride with StarCom. I don’t think Houff is loaded to the point he could support a big team, he just has a bit, but it is enough for a struggling start up team to take and try to improve. The backmarker teams can really only pull from two pools of drivers – those who are very inexperienced and will jump at a chance to get their name in the Cup ring, and those who are washed up and just trying to bring the car home clean as they ride into the sunset of their career. I think the Charters have probably caused this more than anything – the driver doesn’t have to be good enough to qualify the car into the show – that’s guaranteed. They can put anybody in the car who can just do laps.

I think teams like StarCom need to check though – are they actually gaining money when a driver is destroying their cars?

Great article making great points. That being said, this ain’t the first time it’s happened and probably won’t be the last.

I remember when every rookie driver at Darlington and Indy had to pass a test judged by a veteran driver or panel before he or she could race there. I guess it doesn’t matter any more (sorry Paul).

Maybe there should be a minimum speed that NA$CAR will stick to.

Was houff called into the pits by his crewchief who told him to pit NOW or does anyone know. I would think it makes a difference bc houff didnt really have time to prepare to pit if he was ordered in now by his crewchief. So before everyone places blame i would like to know the facts before i make a judgement.

I wonder the same thing. Did his spotter tell him to pit and did Quinn even see the car below him. If so, that’s on the spotter not Quinn.

again what about the spotters ??

What make the Houff issue stand out even more is that Starcom kicked Landon Cassill to the curb to put Houff in the 00. Oh sure, Starcom said they would fulfill a responsibility to Cassill during the 2020 season, but don’t hold your breath waiting on that to happen. Cassill has the reputation of getting more out of a POS car than it’s capable of as well as taking care of the equipment. If the team is constantly fixing wrecked race cars that takes away from time they could use to make the cars better. Houff even mentioned that this was a brand new car that he wrecked on Sunday. I can’t imagine the checks he writing makes up for the significant drop off in driver skill.

I feel that Nascar brought this on themselves. Back when it didn’t cost so much to run a Cup team, it had arguably a full field of quality drivers. Now 1/3 of the field is inexperienced or drivers who have experience but no success. And a lot of good drivers have never been given a chance because of no money. Feels like many missed opportunities for Nascar, but they are probably happy with all crashes/cautions as a result of all the inexperience every week.