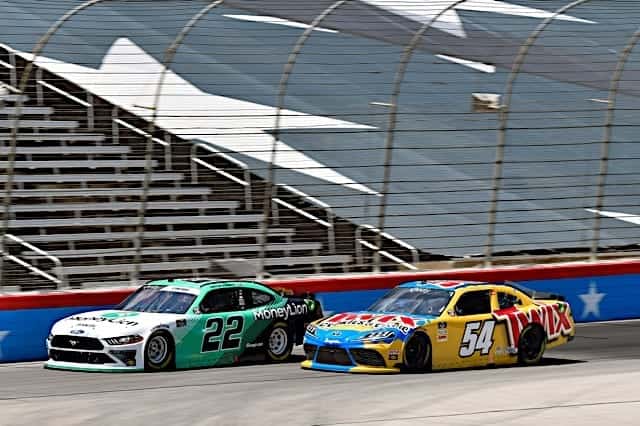 It was a hot day for the NASCAR Xfinity Series (NXS) drivers at Texas Motor Speedway, and an even hotter topic is brewing after the My Bariatric Solutions 300.  After Kyle Busch came out victorious on Saturday, July 18, in his 355th Xfinity start, NASCAR announced his No. 54 Toyota failed post-race inspection. That handed the win to Team Penske’s Austin Cindric, the second-place finisher, and denied Busch his second NXS win of 2020. It’s the third straight victory for Cindric in a most unexpected fashion after sweeping a doubleheader at Kentucky Speedway the week before.

Busch has previously won nine times in NASCAR’s second-tier division at Texas’ 1.5-mile oval. If this win held up, Busch’s victory would have been his record-setting 98th in the series.

Instead, his Joe Gibbs Racing team was disqualified for failing the height measurements in the left rear of the car. It erased a strong finish where Busch powered to the front, leading the final 10 laps while holding off Cindric on a final green-white-checkered restart.

“You want to win it on track,” Cindric said. “I feel like we had a shot to do that today and maybe didn’t execute as well as we should have and that’s what kept us out, but fast race cars and being in position, that’s what counts.”
And this victory will count in Cindric’s official tally, leaving him just 24 points behind Chase Briscoe for the series point lead. That duo has now combined to win half of the 16 races held in NXS this season.
Both were initially no match for Busch after a late caution for Joe Graf Jr.’s wreck forced overtime. The Cup Series veteran got the jump on the restart, ending a battle up front that switched through mostly pit strategy and restarts. Busch, Cindric, Briscoe, Justin Allgaier and Harrison Burton combined to lead 189 of 201 laps as the race produced 15 lead changes.

It was a bizarre end to a race that began with some promise after Annett led the field to green shortly after 3 p.m. ET. Early crashes that took out Riley Herbst and Myatt Snider, respectively, removed the need for a competition caution as Cindric swooped into the early lead. He’d stay there throughout much of stage one, continuing his recent strength on intermediates.

But with 10 laps to go in the stage, Allgaier closed in, taking the point from Cindric and charging to a stage one win. The JR Motorsports driver would go on to lead a race-high 98 laps, adding stage two victory to his resume after continuing to cruise out front. It was a relatively drama-free middle stage of the event as Allgaier led wire-to-wire after passing Cindric one more time on the restart. The only on-track caution came when Snider’s rear panel was dropped onto the racing surface right around the exit of turn 2.

The final Texas stage began with Anthony Alfredo, running Richard Childress Racing’s No. 21 Chevrolet, sitting on top of the scoring pylon. Alfredo pulled away in clean air before being challenged by Allgaier and Busch with less than 100 laps remaining in the race. By lap 107, while still running inside the top five, his promising run came to an end when Alfredo slammed the outside SAFER barrier in turn 2. The incident took Alfredo out of contention as suspension problems eventually left him stranded in the garage in 27th place.

On the other end of the caution flag, Kyle Busch restarted second below Allgaier after battling through the field most of the race for clean air. He finally overtook the top spot from Allgaier on lap 116 before the caution flew for Gragson striking the outside SAFER barrier, essentially in the same location Alfredo wrecked. Gragson’s car got rolling but he was unable to control his race car, smacking the outside SAFER barrier in turn 4 before driving to pit road on lap 119. The JR Motorsports driver took his car to the garage shortly after.

After that came a 73-lap, green-flag run that appeared to end with Busch holding the upper hand. Instead, it’ll go down as a disqualification, the first of its kind this season while handing Cindric a surprise victory.

Next up for the NASCAR Xfinity Series is the Kansas Lottery 300 at Kansas Speedway on Saturday, July 25, at 5 p.m. ET. Coverage will be provided by NBC Sports.

Kyle Busch disqualified in post race inspection for not meeting minimum heights. Austin Cendrick was given the win.

Unfortunately, the race still sucked because I turned it off thinking Busch had won. So, not a great race to watch. That also means he is still 3 race wins short of hitting the 100 goal to further stoke his ego. I’ll be so glad when he hits that mark and gets the hell out of the Xfinity series.

NASCAR takes away KB’s Xfinity victory because his left rear height was a hair out of spec after racing 300 miles. AA in Cup passes pre-race inspection with no brakes. Sounds unfair.