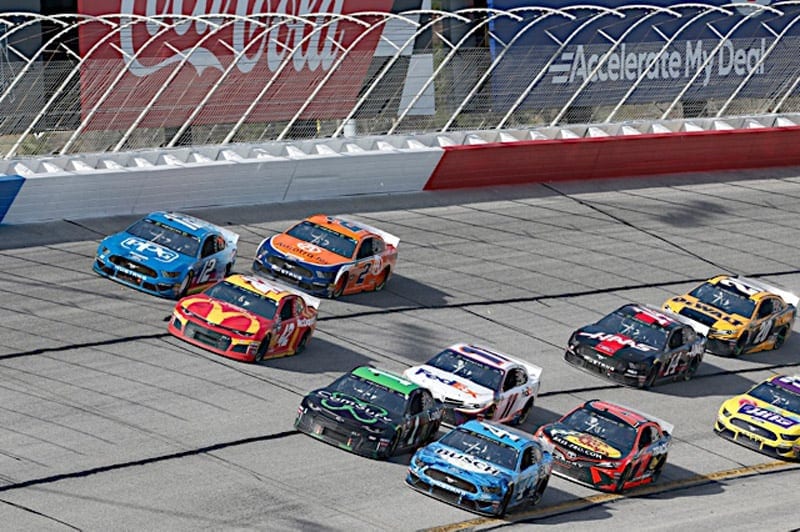 Many folks have suggested that NASCAR should trim all 500-mile races down to 400-mile races or shorter, aside from the crown jewel events. That’s right – many in the NASCAR world think that, with today’s racing and how the attrition rate is almost non-existent, any race 500 miles or more is simply too long.

Times change, as do the demands of the race fan. The last 500-mile race at Atlanta Motor Speedway took just a tick over 3 hours, 30 minutes to complete. Is that too long? Three of NASCAR’s crown jewel events are 500 miles in length or longer – the Daytona 500, the Coca-Cola 600 and the Southern 500. No one wants to mess with tradition but outside of those three races, is it time for NASCAR to change things for the younger generation and shorten all 500-mile races? Clayton Caldwell and Mark Kristl are up this week to debate this hotly contested topic.

Let me go on the record and state that I am an old-school fan who is resistant to change. There are some things I have completely been wrong about, but I truly believe that if we are trying to shorten races, we are trying to fix the wrong problem.

The length of the races is not the problem. Of the remaining five 500-mile races, two of them belong to Talladega Superspeedway. This season’s race at Talladega was action-packed. You heard a lot of noise following the event, but none of it consisted of trimming the length of the race. Why? Because many folks love the action and drama at Talladega and would not opt to trim the distance of those races at all.

The number of 500-mile races on the NASCAR schedule has significantly dwindled in recent years. Dover International Speedway used to have two 500-mile races. Auto Club Speedway’s lone event used to be 500 miles. Both of Pocono’s 500-mile events have been slashed. Charlotte’s October 500-mile event has turned into a 250-mile ROVAL.

Let me ask you this: Do you really think the reduction of the length of those races have helped the racing at most of those tracks? Every year I see people complaining about the lack of action at Pocono Raceway. It didn’t stop because the races were cut to 400 miles.

Texas’ new configuration has been an absolute disaster. It has become a one-groove racetrack, no matter how much PJ1 they throw down in the corners. The track used to put on a great show but that’s no longer the case. Let me tell you – 500 miles is not the problem at Texas. They have bigger issues there.

Let’s change gears for a second. The NFL is the largest sport in this country followed by college football. In some parts of the nation, college football is like a religion. Has anyone really sat down and timed how long the average college football game takes from start to finish? No! Nobody cares, because the product is incredible. Just like Talladega, no one cares about how long something takes if it’s a pleasurable experience.

That’s what we should be focusing on. What can we do to help the racing on the 1.5-mile tracks in this sport? I don’t think the current package is making it any better, but I also don’t think stages and competition cautions are helping pick up the race pace.

If we start cutting race lengths because a race is boring instead of focusing on the real issues, how far do we want to go? What happens when 400-mile races feel too long? It just ignores the real issues – the lack of clean air impacting these aero-dependent cars on 1.5-mile tracks.

All these factors have contributed to the lack of action and long races times. The length of these races is not the issue – it’s the racing itself, and the way we conduct races. You’ll never hear fans complain about the length of college football games, which run on average over 3 hours, 15 minutes long, because there is always action and entertainment. We need to focus on the real problem instead of ignoring it and fixing something that doesn’t need to be fixed.

Not every NASCAR race will feature dozens of leaders with exciting side-by-side racing. Can a driver dominate a race and it still be exciting? Absolutely – but that is not a certainty.

Because not all races will be remembered as exciting, then NASCAR can do us all a favor and shorten the distances of races. Shortening the race distances may not improve the quality of the on-track product, but it at least lessens the time of the race before it has a chance to get boring.

There are a lot of practical reasons to shorten races. When the weather is good, fans might prefer spending a Sunday outdoors instead of inside watching a race. NASCAR’s TV partners broadcast other programs that they don’t want disrupted if a NASCAR race runs over its allotted time. In the thick of summer – and at places like Texas Motor Speedway – drivers will be battling the detrimental impact of heat exhaustion. Most of the time, midweek races are the only races with reasonable lengths, in terms of laps, mileage and overall time.

2020 has also showed us how detrimental a weekend of bad weather can be for the sport. Shorter races make it easier to run a race to its official completion point – halfway – or to reschedule entirely.

Shortening race distances also save teams money. Fewer laps in a race decrease the number of needed tires. Fewer tires purchased throughout a season is an important cost-savings measure for teams. Fewer tires available in a shorter race also could lead to a pit strategy. If a race is filled with cautions, then crew chiefs could be forced to determine when to pit their drivers for fresh rubber rather than automatically pit for four new tires. There would also be less fuel used and, very likely, less wear and tear on equipment.

But when it comes to race quality, shortening races ideally improves the intensity. If NASCAR reduces race lengths, then the number of laps in a stage also decreases. Qualifying, whenever NASCAR resumes its usage, becomes paramount. In the stages, drivers have fewer laps to push to the front for stage points. Pit stop mistakes are even more detrimental because there is less time to regain time on track. Yes, a driver could still dominate that race, but a shorter race ramps up the competition and enables drivers to charge hard for every single lap.

In addition to shortening the distance of both Texas races and the Atlanta race, NASCAR could also decrease the mileage at Chicagoland. I argued two years ago that NASCAR should make it a shootout on a 1.5-mile track. Regardless of the package, NASCAR can market any Cup Series race as a short, fast event.

NASCAR has needed to shorten the race distances on its schedule for a while. As Caldwell noted, NASCAR has decreased the mileage of a few tracks’ races. It needs to continue that change, for starters by decreasing the mileage at one if not both races at Texas and the race at Atlanta. – Mark Kristl

Fit the races into a 3 hour block of time. Improve the track clearing process after accidents…its terrible today. if the races get shorter, reduce the number of stages. And PLEASE stop wasting 10 laps on every caution at the stage breaks. This means an improvement in scoring (where data is available real time) and getting information to drivers is required via digital display. This has to be streamlined to avoid wasted time. There needs to be attention paid to running a precision show. Nascar isn’t quite there yet.
There are human factors studies run that define the attention span of most viewers. Formula 1 has opted to have a 2 hour race, plus a half hour pre-race and a half hour post race. Soccer is 3 hours of playing time with a 15 minute break between halves. Football tries to fit into a 3 hour time window. So what does that tell you?

No one complained about the length of the events until the Car of Terror appeared that the drivers can’t “race” and can’t be designed to “race.” Instead of going high down force low horsepower they should be going low down force high horsepower. The cars need to create a bigger hole in the air.

This topic has been tossed around in the 50 years I have been a NASCAR fan. Back in the late 90’s (or, maybe early 2000’s: senior moment) Dale Jr. was interviewed and said he would like to see the races shortened. Personally, I think the longer distances separate the wheat from the chaff and let the drivers know they’ve made the big time.

Personally, I’d like to see Heat races, with the first 10-15 cars from each Heat competing in the finale for the big money. That’s how it is in many (or, maybe all) the short tracks in America and it seems to work because its been done for years. If you think about it, it’s kind of how they do the Daytona 500 for starting positions. Run for qualifying for the first two slots, then two short races, then the main event. So, why not expand that formula for every race?

I’m kinda resistant to change but eventually accept it happened and like it or don’t as I see fit.
Aero push? Bah, lets go back to the flying bricks. At first I didn’t like the splitter till I realized they were an excellent tool to get even with without damaging one’s own racer. The flying wing sucked . Too dangerous although they contributed to spectacular scenes. So chop the spoilers to about an inch and have fun with the horse power.
Complaints that 500 mile races are tooooo long is stoopid. First off, I’m seeing a lot of whimps sag out of their rides exhausted. Heck, Flocko Jocko took it fine. Even Tony Stuart never showed exhaustion when he in the end proudly swung his big belly around. That drivers survive the travials of super concentration for 500 miles is in itself a major accomplishment. And I like watching accomplishment.
I do like the cone rule. It’s fun watching the confusion then self butt kicking for finding out a driver makes the wrong choice afterward.
Although I wish there were less caution laps, I accept what is and am drawn to at least EVERY Cup race presented like a moth to the flame. I’ve been burned a few times but haven’t learned my lesson yet. Maybe no lesson to learn.